This article deals with the gas known as steam; for other meanings, see steam (disambiguation) . 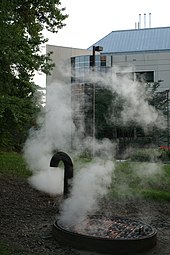 Vapors : (gaseous) water vapor is condensed by cooling; the resulting (liquid) water droplets are visible as an aerosol

In colloquial language, steam usually refers to an admixture of air, which is visible because the substance is partly in the form of tiny droplets, i.e. in liquid form.

Over time and if there is no disturbance, a dynamic equilibrium is established in which just as many particles of the liquid or solid phase pass into the gaseous phase as, conversely, return from the gas. The steam is then saturated and is also referred to as vapor , brodem or steam . How many particles change from one phase to the other depends, among other things, on the pressure and temperature of the system under consideration . In technology , the equilibrium between liquid and gaseous phase plays a major role in thermal separation processes .

If the gas phase is no longer in contact with the associated liquid or solid phase and if heat continues to be supplied to the steam , it is superheated and is present as superheated steam. The stronger this warming is, the further one moves away from the area in which one still speaks of steam, and approaches a behavior that is then described as gaseous .

If you slowly cool down superheated steam, the so-called dew point is reached at some point , at which the steam is saturated again and condenses again to a liquid with further cooling . In the case of a direct transition from the gaseous to the solid state, i.e. with a resublimation , this point is called the frost point .

Meanings of steam in language

While steam (from Middle High German tampf / steam "vapor, water vapor") as a polymer formed from a liquid gas - apart from substance intrinsic stains - is invisible, we speak in everyday life in steam usually of a visible mixture of air and fine liquid drops, as he forms for example in the condensation of water vapor and can be seen escaping from many chimneys, for example. For the same form of finely distributed, small water droplets in air, the expressions contrail (at the exit of an aircraft turbine) or fog (near the ground) or cloud (in the sky) are also used in everyday language . The correct scientific term for a mixture of finely divided liquid droplets in a gas is mist . In the case of extremely small drops of liquid (and / or solid particles), this mixture is also known as an aerosol . In the special case of water, one speaks of wet steam in technology .