The phase used in thermodynamics is more narrowly defined, it particularly subdivides the solid state according to its internal structure.

Which state of aggregation or which phase is stable depending on pressure and temperature is shown in a phase diagram.

The three classic states of aggregation 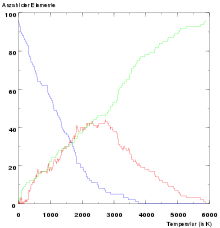 There are three classic states of aggregation:

In the case of solids, a distinction is also made according to other characteristics:

Particle model of the states

The classic states of aggregation can be explained with a particle model that reduces the smallest particles of a substance ( atoms , molecules , ions ) to small spheres.

The mean kinetic energy of all particles is a measure of the temperature in all states . The type of movement is completely different in the three aggregate states. In the gas, the particles move in a straight line like billiard balls until they collide with another or with the wall of the vessel. In the liquid, the particles have to squeeze through gaps between their neighbors ( diffusion , Brownian molecular motion ). In the solid, the particles only oscillate around their position of rest.

Particle model of a crystalline solid

The smallest particles in a solid are only slightly in motion. They swing around a fixed position, their grid position, and mostly rotate around their axes. The higher the temperature, the more vigorously they vibrate or rotate, and the distance between the particles (usually) increases. Exception: density anomaly .

Note: If one looks at the particles with quantum mechanical principles, then due to Heisenberg's uncertainty principle, particles must never actually stand still. They have small oscillations, which are also known as zero point fluctuations . This corresponds to the basic state of the harmonic oscillator .

Various forces act between the smallest particles, namely the Van der Waals forces , the electrostatic force between ions, hydrogen bonds or covalent bonds . The type of force is determined by the atomic structure of the particles ( ions , molecules , dipoles ...). The attraction is particularly strong for materials that are solid even at high temperatures.

Due to the weak movement and the firm cohesion, the particles are arranged regularly.

Due to the strong attraction, the particles are close together (high packing density )

Particle model of a liquid or an amorphous solid

The particles are not stationary, as is the case with solids, but can move one another. When the temperature rises, the particle movements become faster and faster.

Although the faster movement increases the distance between the particles (most solids take up a larger space when they melt), the particles remain attached to one another. The same applies to the reduction of the volume of a liquid by compression as in the case of a solid, whereby the corresponding compression module of the liquid comes into play. When the temperature drops, the volume also becomes smaller, but in the case of water only up to a temperature of 4 ° C ( anomaly of the water ), while below this the volume increases again to 0 ° C.

Although the particles are constantly rearranging and trembling / rotating, an arrangement can be determined. This short-range order is similar to that in the amorphous solid, but the viscosity is much lower, i.e. H. the particles are more mobile. 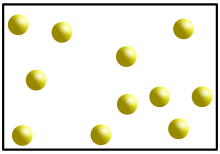 Particle model of a gas

With substances in a gaseous state, the particles move quickly. A gas or gaseous substance spreads quickly in a room. In a closed space, the hitting of the smallest particles against the walls leads to the pressure of the gas.

The rapid movement of the particles in a gas means that they are far apart. They only bump into each other now and then, but they remain at a great distance compared to the liquid phase. A gaseous substance can be compressed, i. H. the volume can be reduced.

Because of the movement, the particles are disordered.

In physical chemistry, a distinction is made between steam and gas . From a physical point of view, both are nothing other than the gaseous state of aggregation; the terms also have no direct relation to real gas and ideal gas . What is colloquially referred to as "steam" is, from a physical point of view, a mixture of liquid and gaseous components, which in the case of water is called wet steam .

A vapor in the narrower sense is a state of equilibrium between the liquid and gaseous phase. It can be liquefied without having to do any work, i.e. there is no pressure increase when it liquefies. In technology, this type of steam is called wet steam, in contrast to so-called superheated steam or superheated steam, which is actually a real gas made of water molecules and whose temperature is above the condensation temperature of the liquid phase at the respective pressure.

These designations (solid, liquid, gas) are also used when substances take on a different physical state under changed conditions. In a narrower sense, however, the classification refers to the standard conditions mentioned above ; each substance then belongs to one of the categories.

When substances are mixed, characteristic mixtures , for example mist or foam, result depending on the physical state of the components and their quantitative proportion .

Change in the physical state 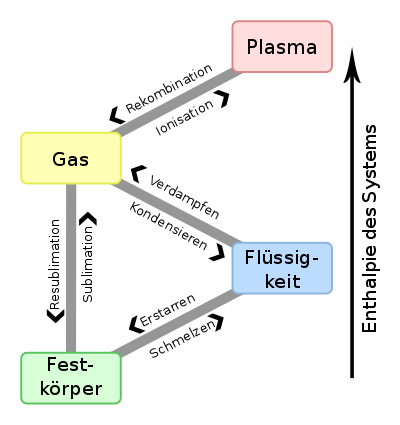 The transitions between the different aggregate states have special names (eoc, omc, eon) and special transition conditions, which in the case of pure substances consist of pressure and temperature. These transition conditions correspond to points on the phase boundary lines of phase diagrams. A certain amount of heat is required for each phase transition or is released in the process.

Terms for the changes in the state of aggregation of water

All transitions can be observed using the example of water in everyday life (see figure):

Snow or ice begins to become liquid in spring as soon as temperatures are above the melting temperature .

If the water in lakes cools below freezing point , ice crystals form , which over time grow larger and larger until the surface is covered with a layer of ice.

If water in the saucepan is heated above its boiling point, the water becomes gaseous. The "bubbling" in the saucepan comes about because the water on the hot bottom of the pan first reaches the boiling temperature - the rising bubbles are the water vapor , which (like most gaseous substances) is invisible. Evaporation , the transition from liquid to gaseous form without reaching the boiling point, can be easily observed when sweating on the skin.

The clearly visible mist above boiling water, which is usually colloquially referred to as “steam”, is water vapor condensed into tiny water droplets. Dew and clouds are also created by condensing water vapor.

Frozen puddles can gradually “dry out” through sublimation in winter, even at temperatures well below freezing point, until the ice has completely sublimed and the puddle has disappeared.

Hoar frost or ice flowers that form in winter are caused by the water vapor that resublimates from the ambient air.

Particle model of the phase transitions

By increasing the temperature (adding thermal energy), the smallest particles move more and more violently and their distance from one another (usually) increases. The Van der Waals forces still hold them in their position, their lattice place. Only from the so-called melting temperature does the oscillation amplitude of the particles become so great that the lattice structure partially collapses. Groups of particles are created that can move freely. In them there is a short-range order , in contrast to the long-range order of particles within the crystal lattice of solid substances.

As the temperature drops, the movement of the particles decreases and their distance from one another becomes smaller and smaller. The rotational energy also decreases. At the so-called solidification temperature , the distance becomes so small that the particles block each other and interact with each other in an increasingly attractive manner - they occupy a fixed position in a three-dimensional lattice.

There are liquids that expand when the temperature drops, such as water. This behavior is known as a density anomaly .

The speed of the smallest particles is not the same. Part is faster, part is slower than average. The particles constantly change their current speed due to collisions .

At the boundary of a solid or a liquid, the transition of a phase into a gaseous one, it can happen that a particle happens to receive such a strong impulse from its neighbors that it escapes from the area of ​​influence of the cohesive force . This particle then turns into a gaseous state and takes some thermal energy with it in the form of kinetic energy, i.e. the solid or liquid phase cools down a little.

If thermal energy is supplied to a system and the temperature reaches the sublimation or boiling temperature, this process takes place continuously until all the smallest particles have passed into the gaseous phase. In this case the temperature in the evaporating phase usually remains unchanged until all particles with a higher temperature have disappeared from the system. The heat supply is thus converted into an increase in entropy .

If the cohesive forces are very strong, or if it is actually a much stronger metal or ion bond , then there is no evaporation.

The strong increase in volume of a substance due to evaporation can lead to a physical explosion if a lot of heat is suddenly applied .

However, if the particle comes from a substance that is gaseous at this temperature, the cohesive forces are too weak to hold it in place. Even if it happens to have lost so much energy that it is bound, the next collision with neighboring tiny particles will throw it back into the gas phase. By lowering the temperature one can withdraw their energy from the smallest particles. As a result, when the temperature drops below the sublimation or solidification temperature, the forces of interaction with other particles cause them to clump together and form a solid or a liquid again.

Phase diagram of an "ordinary" substance and water ( density anomaly )

The pT phase diagram of a substance describes, depending on pressure and temperature, in how many phases a substance is present and in which aggregate state they are. The lines show the pressure and temperature at which the substances change their physical state. To a certain extent, the transition between the aggregate states takes place on the lines , which is why these are also referred to as phase boundary lines . The respective states of aggregation are present on them in the form of a dynamic equilibrium next to one another in different phases.

In addition to the three classic states of aggregation, there are other states of matter, some of which only occur under extreme conditions (sorted by temperature, tending from higher to lower).