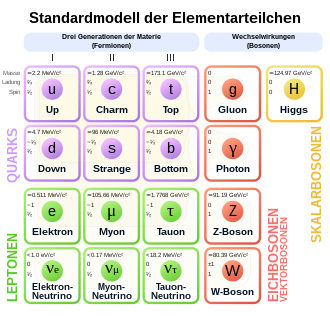 Fermions (named after Enrico Fermi ) are in the physical sense all particles that meet the Fermi-Dirac statistics . According to the spin statistics theorem , they have a half-integer spin , so , etc. To put it clearly, fermions are the particles that make up matter .

Fermions differ from bosons , which satisfy the Bose-Einstein statistics and, according to the spin statistics theorem, have an integral spin. An elementary particle in three spatial dimensions is always either a fermion or a boson. In very thin layers, i.e. two-dimensional systems, there are bosons and fermions as well as so-called anyons , which have their own quantum statistics with any spin.

From the mathematical theory, three types of fermions are possible:

Fermions obey the Pauli principle of exclusion , which states that two fermions cannot assume an identical quantum state at the same time in the same place . In general, the quantum mechanical wave function of two or more fermions of the same type must be completely antisymmetric when two fermions are interchanged, i.e. the sign changes ( phase factor −1).

Applied to the electrons in an atom, the Pauli principle explains that not all electrons can fall into the same ground state , but rather fill the different atomic orbitals of an atom in pairs . This property explains the systematic structure of the periodic table of chemical elements .

In the standard model of particle physics, there are no elementary fermions with a spin greater than 1/2. One property of fermions with spin 1/2 is that their quantum mechanical wave function changes sign after a rotation through 360 °; the initial state is only restored after a rotation of 720 ° (i.e. two complete rotations). This can be clearly compared with a clock: you only have the same time of day again after turning the hour hand by 720 °.

In the model of elementary particles expanded by supersymmetry , there are further elementary fermions. For every boson there is a mathematical fermion as a supersymmetrical partner particle , a so-called bosino , so that the spin differs by ± 1/2 in each case. The superpartners of the bosons are identified by the ending -ino in the name. B. the corresponding fermion to the (hypothetical) Graviton then Gravitino .

Strictly speaking, a fermionic field is assigned as a super partner to each bosonic field in the interaction picture. In the mass image, the observable or predicted particles result as linear combinations of these fields. The number and the relative proportion of the components contributing to the mixtures on the side of the fermionic superpartners do not have to match the proportions on the original bosonic side. In the simplest case (with little or no mixing), however, a specific fermion or bosino (such as the gravitino) can be assigned to a boson (such as the graviton mentioned above).

So far none of the postulated supersymmetric partner particles has been experimentally proven. They must therefore have such a high mass that they do not arise under normal conditions. It is hoped that the new generation of particle accelerators will be able to detect at least some of these fermions directly or indirectly. With the lightest supersymmetric particle (LSP) it is hoped to find a candidate for the dark matter of the universe.