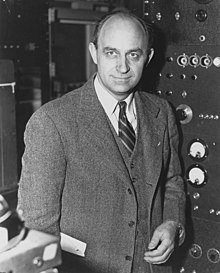 Memorial stone for Enrico Fermi in the "Santa Croce" church in Florence , Italy

The FERMIAC , an analog computer invented by Enrico Fermi for studying neutron transport

At the age of 17 he began studying physics at the Scuola Normale Superiore in Pisa , which he graduated magna cum laude in 1922 with an experimental thesis on X-ray scattering on crystals with a Laureate degree. In 1923, thanks to a scholarship, Fermi spent several months researching in Göttingen with Max Born . At that time Göttingen was the leading center of theoretical physics , and it was here that a lot of important work for quantum mechanics was carried out . In 1924 he worked for several months in the Netherlands for Paul Ehrenfest , also a co-founder of quantum mechanics. In January 1925 Fermi was initially appointed professor of mathematics in Florence. In 1926 he went to the University of Rome (La Sapienza) as a professor of theoretical physics on the chair of theoretical physics newly founded by Orso Mario Corbino , which he held until 1938. Fermi had been a member of the Freemasons Association since 1924 . From 1928 he was married to Laura Capon (1907–1977) and had two children with her: Nella (1931–1995) and Giulio (1936–1997). In the period from 1926 to 1932 Fermi produced important works on quantum mechanics with applications, for example, in solid state physics and quantum statistics ( Fermi-Dirac statistics for fermions , Fermi's golden rule , Fermi surface , Fermi resonance , Thomas- Fermi theory of the atom). A very active group of theoretical and experimental physicists developed around Fermi in Rome. It included Gian-Carlo Wick , Ugo Fano , Giovanni Gentile , Giulio Racah , Ettore Majorana and the experimenters Franco Rasetti , Giuseppe Cocconi , Emilio Segrè , Edoardo Amaldi and Bruno Pontecorvo .

Inspired by the discovery of the neutron by James Chadwick in 1932 and the evidence of nuclear transformations after irradiation with alpha particles by Irène and Frédéric Joliot-Curie , Fermi turned to experimental physics in 1934 . His groundbreaking discovery was that nuclear conversion processes using neutron radiation are much more effective. A further improvement in the yield is obtained if the neutrons are strongly decelerated ( thermal neutrons ). In 1934 Fermi published his theory of beta decay ("Fermi interaction"). As early as 1933, he had coined the name neutrino for one of the particles involved in beta decay, the existence of which had been postulated by Wolfgang Pauli three years earlier .

Through neutron irradiation of the heaviest known element uranium at the time , Fermi and his colleagues also achieved changes in the starting material (different chemical behavior, changed half-life of the emitted radiation) and mistakenly interpreted these as a nuclear transformation to transuranium ( Nature article 1934). Ida Noddack criticized this and already pointed out the possibility of nuclear fission , which Otto Hahn and Fritz Straßmann showed four years later using chemical-analytical techniques; the theoretical basics were worked out by Lise Meitner and Otto Frisch (see history of nuclear fission ). The first transurane could not be detected until 1942, but according to a completely different synthesis procedure. In 1938 Fermi received the Nobel Prize in Physics for his work (according to the official justification for the identification of new radioactive elements produced after irradiation with neutrons and his discovery of nuclear reactions that are caused by slow neutrons), although his interpretation of the neutron experiment (generation of transurans ) is based on current knowledge was wrong.

In the same year, Fermi emigrated with his family to the USA due to the anti-Semitic laws of the Mussolini regime passed in 1938 , which affected his Jewish wife Laura, his two children and some of his employees. In the early 1940s, Fermi worked with Isidor Isaac Rabi and Polykarp Kusch at Columbia University in New York. He succeeded on December 2, 1942 at 15:25 at the University of Chicago with the nuclear reactor Chicago Pile No. 1 introduced a critical nuclear fission chain reaction for the first time , an achievement that was based on the theoretical preparatory work by Leó Szilárd .

In April 1943, Fermi Robert Oppenheimer suggested the possibility of contaminating the German food supply using the radioactive by-products from the enrichment. The background was fear that the German atomic bomb project would be at an advanced stage and Fermi was also skeptical at the time whether an atomic bomb could be developed quickly enough. Oppenheimer discussed the "promising" proposal with Edward Teller , who suggested the use of strontium-90. Even James Bryant Conant and Leslie R. Groves were taught, but Oppenheimer only wanted to take the plan into attack, if enough food could be contaminated with the weapon to half a million to kill people.

In the summer of 1944, Fermi and his family moved to Los Alamos ( New Mexico ) to the secret atomic research laboratory in the USA . As a consultant to Robert Oppenheimer , Fermi played an important role in the development and construction of the first atomic bombs . After the Second World War Fermi dealt again with basic research in the nuclear research center at the University of Chicago. After a trip to Europe in 1954, Fermi was diagnosed with stomach cancer. He underwent an operation on October 9th and died seven weeks later.

Fermi was known for his quick estimates and his physical intuition - he was a master of the "back of the envelope" calculations (which take up no more space than the back of an envelope). The Fermi questions ( Fermi problems ) are also proverbial, for example how to estimate the number of piano tuners in a city like Chicago from a small amount of data.

The electron gas (also Fermigas ) (cf. metal bond ), a group of elementary particles ( fermions ), the artificially produced chemical element fermium and an energy level in many-particle systems ( Fermi level ) were named after him. The Atomic Energy Commission of the USA donated the z. Z. Enrico Fermi Prize endowed with US $ 50,000 . The Fermi National Accelerator Laboratory near Chicago is named after him and the regular courses of the International School of Physics Enrico Fermi of the Italian Physical Society and its Premio Enrico Fermi .

In 1936 he was awarded an honorary doctorate from Ruprecht-Karls-Universität Heidelberg , in 1946 from Yale University and Washington University , in 1948 from Harvard University and in 1952 from the University of Rochester . In 1953 he was president of the American Physical Society .

In Italy he was a member of the Accademia d'Italia .