This article covers the city in Italy. For further meanings, see Pisa (disambiguation) .

Pisa is a city in Italy , located in Tuscany on the Arno near its confluence with the Ligurian Sea . In the Middle Ages and in the early modern period, Pisa was a city-state and one of the Maritime Republics as the Republic of Pisa and is now the capital of the province of Pisa with 91,393 inhabitants (as of December 31, 2019) .

Landmark is the the Leaning Tower of Pisa known Campanile of the cathedral on the Piazza dei Miracoli in the north of the city center. The heart of the historic districts of San Martino, Santa Maria, San Francesco and Sant'Antonio is the central Arno bridge, the Ponte di Mezzo .

In addition to the University of Pisa , the Scuola Normale Superiore and the Scuola Superiore Sant'Anna , elite universities of the Italian state, have their headquarters in Pisa. With around 40,000 people, the group of students makes up almost half of the population and has a significant impact on the atmosphere of the city. Tourism also plays a significant role.

In the Middle Ages , Pisa was one of the four seafaring republics of Italy (alongside Genoa , Amalfi and Venice ). In addition, the city was in competition with the neighboring Tuscan republics of Lucca , Florence and Siena . Eventually the Republic of Pisa lost its independence to Florence in 1406. During this time, Pisan , a special urban language , developed that is still spoken today and that still has a lively writing tradition ( scripta ).

Pisa also became known through the Council of Pisa in 1409, which was elected by Alexander V and his successor John XXIII. tried to end the Western Schism , but only made it worse, so that suddenly there were three Popes, one in Rome , one in Avignon and one in Pisa at the same time.

Famous sons of the city were Galileo Galilei , after whom the airport of Pisa is named, and Fibonacci (Leonardo of Pisa), one of the most important mathematicians of the Middle Ages.

Museo dell'Opera del Duomo, Piazza dei Miracoli
Here u. a. the original sculptures by Nicola Pisano , Giovanni Pisano and Tino di Camaino from the cathedral and the cathedral treasury are on display.
Museo delle Sinopie, Piazza dei Miracoli
The museum exhibits sinopias of frescoes for the Camposanto Monumentale, including preliminary drawings by Franceso Traini , Buffalmaco , Benozzo Gozzoli , Andrea di Bonaiuto , Antonio Veneziano , Spinello Aretino
Museo Nazionale di San Matteo, Lungarno / Piazza San Matteo in Soarta
The museum contains a rich collection of Pisan-Tuscan art from the 12th to the 17th centuries, including a polyptych by Simone Martini , Pisan sculptures from the 12th to 14th centuries, illuminated manuscripts from the 12th to 14th centuries, as well as an extensive collection antique, Pisan and oriental ceramics.
Palazzo Blu, Lungarno Gambacorti 9
The palazzo, partly furnished with original furniture, houses the collection of the Cassa di Risparmio , Pisa. One focus of the collection is the Tuscan painting of the 14th century, such as Taddeo di Bartolo , Francesco Neri da Volterra , Agnolo Gaddi and Cecco di Pietro . There are also pictures of Orazio Gentileschi and his daughter Artemisia , portraits of the Roncioni family by Jean-Baptiste Desmarais (1756–1813), Palmiro Bardotti, Giovanni Battista Tempesti (1729–1804), Pietro Benvenuti (1769–1844) and Luigi Gioli (1854-1947).
In the sculpture collection are u. a. Representations of Christ as Man of Sorrows ( Cristo in Pietà ) by Nino di Andrea Pisano and Benedetto Buglioni .
The graphic collection includes objects from the 16th century to the present day, including vedute of Pisa.
Museo degli Strumenti per il Calcolo, Via Nicola Pisano 25
A museum on the history of computer science and electronic data processing. You can also see antique calculating machines and tools used by scientists.

Museo delle navi antiche di Pisa, Via Ranuccio Bianchi Bandinelli
A museum at the excavation site of Roman ships. Parts of the ancient Etruscan-Roman port facilities, approx. 30 ships from the 3rd century BC, were excavated. BC to the 7th century AD, partly with charge.

It has been documented since the end of the 14th century that the Gioco del Ponte ['d ʒɔ ko del' ponte] is celebrated on the last Sunday in June . Particularly strong men from the districts north of the Arno ( Tramontana , includes the districts of Santa Maria , San Francesco , San Michele , Mattaccini (Porta a Lucca), Satiri (Portanuova-Cep) and Calci ) try a seven-ton car across the Ponte di Mezzo on the southern half. The southern districts of the Mezzogiorno ( Sant'Antonio , San Martino , San Marco , Delfini (Marina di Pisa and Tirrenia) , Leoni (Porta Fiorentina, Riglione and Putignano) and Dragoni (Porta a Mare and San Piero a Grado) ) try to do this prevent and move the car north.

Two festivals are dedicated to the city saint, San Ranieri, whose remains are kept in the cathedral. Every year, on June 16, the eve of the day of San Ranieri, the Luminara takes place. All electric lights along the Arno are extinguished, and thousands of candles in and around the windows and in large frames bathe the Arno and the surrounding promenades in a magical light.

On June 17th the Regata di San Ranieri takes place. All districts - San Martino and Sant'Antonio (south), San Francesco and Santa Maria (north) - each send out a rowing team that tries to leave the others behind on the two-kilometer route towards the city center.

Pisa has the most important central Italy with the international airport Galileo Galilei 2 km south of the city center. There is also a magnificent train station in the center (Pisa Centrale), from which you can directly reach La Spezia , Livorno and the port of Livorno , Lucca , Genoa , Milan , Turin , Rome , Salerno , Naples and Florence . The road "SGC FI-PI-LI" (literally expressway FI-PI-LI) connects Florence (FI), Pisa (PI) and Livorno (LI).

Michele Conti has been Mayor of Pisa since June 27, 2018. He ran for the center-right alliance led by the Lega (Nord) and is the first right-wing mayor in the city's history. 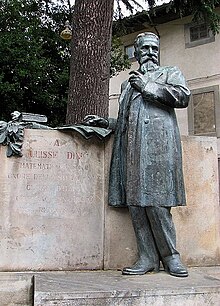 Monument to Ulisse Dini in Pisa

Monument to Leonardo Fibonacci at the Camposanto Monumentale

Monument to Paolo Savi in the Botanical Garden

Municipalities in the Province of Pisa in the Region of Tuscany