The provinces or metropolitan cities of Italy

The provinces ( Italian province, singular provincia ) are together with the metropolitan cities the middle level of the territorial authorities in Italy .

18 out of 20 regions in Italy are divided into a total of 88 provinces - called free municipal consortia in the Sicily region - and 14 metropolitan cities, which have the status of self-governing local authorities. As of 2014, the metropolitan cities emerged from 14 provinces. The provinces of the Trentino-Alto Adige region , Trento and Bolzano-Alto Adige , have a special position: They are autonomous provinces and the same as the Italian regions . 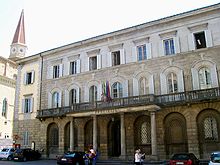 Administrative seat of the Province of Arezzo .

The Italian provinces (and the essentially equivalent metropolitan cities) are independent regional authorities with their own organs, functions and tasks according to the principles enshrined in the Italian constitution .

As self-governing local authorities, the Italian provinces are comparable to some extent with the districts in the Free State of Bavaria and with German districts . The central government and the regions can delegate additional tasks to the provincial self-governing bodies.

The autonomous provinces, on the other hand, are comparable to the German or Austrian federal states. Their independence is anchored in the constitutional provisions on the autonomy of South Tyrol .

Villa Cordellina Lombardi in Montecchio Maggiore , representative seat of the Province of Vicenza .

These provisions also essentially apply to the province- equivalent free municipal consortia ( liberi consorzi comuali ) of the Autonomous Region of Sicily . The organs of the free community consortia are accordingly defined as follows:

As part of a comprehensive reform, the functions of the provinces have been curtailed and essentially transferred to the regions. The provinces are only responsible for:

Provinces whose territory lies entirely in the mountains and borders on foreign countries are also responsible for the strategic development and operation of joint facilities and can conclude agreements with other provinces and regions, including those with special statutes, and with regional authorities of foreign states.

To carry out the protective functions assigned to them, the provinces maintain independent police organizations, the so-called Polizia Provinciale .

The free municipal consortia of Sicily essentially take over the functions of provinces. In contrast to other provinces, the two autonomous provinces of Bolzano and Trento have extensive legislative and executive powers and the associated financial resources.

The metropolitan cities, in Italian Città metropolitane, are a body provided for by the constitution of the Italian Republic, which simultaneously takes on all functions of a province and also some superordinate municipal functions, in particular in the areas of spatial planning and local transport.

In the regions with a special statute, it is not the state but the respective region that is responsible for the establishment of the metropolitan cities. So far, the Autonomous Region of Sicily and the Autonomous Region of Sardinia have made use of this power and set up the metropolitan cities of Palermo , Messina and Catania and Cagliari on their territory .

For statistical purposes, the metropolitan cities are recorded as provinces. They also take over the license plates of the former provinces.

The state central government maintains numerous branch offices in its decentralized administrative areas. These are usually geographically congruent with the regions or provinces or metropolitan cities.

Each decentralized state administrative unit is headed by the prefect sent by the central government . He is a local government representative and is directly responsible for the public safety and efficient administration of the government branches in the province.

Memorial plaque at the Palazzo Reale in Turin. It commemorates a congress of the provinces of Italy that took place here in 1898.

Origins and development until 2014

The Italian nation-state emerged in 1861 from the Kingdom of Sardinia- Piedmont, which was largely based on the Napoleonic model and whose legal regulations were adopted by the local authorities. Accordingly, Italy was subdivided into provinces (province), districts (circondari), districts (mandamenti) and municipalities (comuni) . This subdivision corresponded to the French départements , arrondissements , cantons and communes . The politically independent regions established between 1946 and 1970 only existed as a group of provinces for statistical purposes and economic planning, rarely also for administrative purposes or as districts of appeal courts.

The provinces were both administrative units of the central government in Rome and independent self-governing bodies with elected representatives. The government in Rome maintained a prefecture in every Italian province, headed by a prefect. All decentralized state offices and agencies on site were subject to this. Together with his sub-prefects, he also supervised the self-government organs of the provinces and municipalities.

Many Italian Ministries talked in the provinces peripheral offices, including police headquarters ( questure ), education authorities ( provveditorati ) or building authorities (Genio Civile) . These offices often had other branches at the level of the circondari or circles, which were supervised there by a sub-prefect. In particular, tax and land registry offices as well as courts were located at this level. The subordinate mandamenti were abolished by the Mussolini cabinet in 1923, the circondari with the sub-prefectures in 1927. At the same time, several new provinces were created. Between 1871 and 1927 their number rose from 69 to 92.

Palazzo Ghilini, joint seat of the prefecture and self-government of the province of Alessandria .

In the 1990s, the central government in Rome began profound reforms in the ministerial bureaucracy . In the course of these reforms, many Italian ministries relocated their most important peripheral offices to the regional level and set up additional branches, sometimes independently of provincial borders. At the same time, the rights of the prefects in the provinces were reduced and the rights of regions and municipalities were strengthened. As a result, the provinces lost much of their original importance as administrative units of the central government.

Administrative seat of the province of Catanzaro .

Since the establishment of the Italian regions, the existence of the provinces as independent regional authorities has repeatedly been publicly questioned because, in the opinion of many, their maintenance was disproportionate to the relatively low level of responsibilities.

In 2012, the Monti government tried to drastically reduce the number of provinces, but was unable to implement the plan due to early elections. The following government, Letta, intended to completely abolish the provinces through a constitutional reform, a goal that was also pursued by the Renzi cabinet , but which failed due to a referendum .

In April 2014, the Renzi government passed a reform of the provinces in the regions with normal statutes, which came into force on January 1, 2015 and, among other things, provides that the provincial organs previously elected to be replaced by representatives of the municipalities . According to the government, the reform should result in savings of 160 million euros, as around 5,000 provincial politicians will no longer be paid. However, the application of a new population scale will increase the number of councilors and councilors in the approximately 8,100 Italian municipalities by around 26,000. According to the government, this should not incur any additional costs. The Monti government made drastic cuts in this area in 2011.

Reforms in the autonomous regions

Administrative seat of the province of Sassari

In a referendum on May 6, 2012, the vast majority of Sardinia's voters voted for the abolition of the eight provinces of their autonomous region. The Sardinian regional council then decided on May 25, 2012 that the competences of the provinces should be transferred to the municipalities or the region and that the provinces should be dissolved. This reorganization could not be implemented because the Italian constitutional court was brought before the regional administrative court. On February 4, 2016, the Regional Council passed a new law reforming the local authorities of Sardinia. The metropolitan city of Cagliari replaces the previous province, the remaining provinces of Sardinia have been reduced from seven to four.

In 2014 it was decided in Sicily to replace the nine provinces with so-called free municipal consortia ( liberi consorzi comunali ). The bodies of these new consortia are elected indirectly, as in the case of the provinces of the regions with normal status. Basically, the provinces of Sicily also continue to exist, albeit with a new internal order. In 2015 three of the nine Sicilian provinces were converted into metropolitan cities , so that in Sicily only six provinces formally continue to exist as so-called free municipal consortia.

In Friuli Venezia Giulia, the statute of the region was changed by a constitutional law in order to initiate the abolition of the provinces. On November 24, 2016, the regional council decided to finally abolish the provinces. Since the abolition of the provinces, the regional area of ​​Friuli-Venezia Giulia has been divided into 18 associations of municipalities, called Unioni Territoriali Intercomunali (UTI for short). Organs of the municipal associations are the assembly consisting of the mayors (Assemblea) , the president (Presidente) and the auditor (organo di revisione) . The municipalities of the Friuli Venezia Giulia region can manage certain functions within the framework of municipal associations: social services; local police including administrative police; commercial activities; Cadastre; Spatial planning and spatial planning on a supra-municipal level; Civil defense planning; Statistics; Preparation of EU-funded projects; Tax administration. The provinces of Gorizia, Pordenone, Trieste and Udine no longer exist as independent regional authorities, but they continue to exist as districts of decentralized state administrations (e.g. prefecture - district office of the government ) or as statistical units.

In the small Aosta Valley region , the region takes on the role of a province. A "Province of Aosta" only exists as a statistical or administrative term. The regional area includes eight associations of municipalities, called Unionen Aostataler municipalities (French Unités des Communes Valdôtaines ).

The following list represents the provinces of Italy, including metropolitan cities , autonomous provinces , free municipal consortia of Sicily, the Aosta Valley region, which is kept as a province for statistical purposes, and the former provinces of Friuli Venezia Giulia, which continue to exist as administrative districts and statistical areas. Provinces with a special statute are the provinces established according to the general legal situation (without the special regulations applicable to certain autonomous regions).

The first column names the respective two-letter abbreviations that are used, for example, in the vehicle registration number .