Neue Freie Presse is a redirect to this article. For the youth magazine see Günther Nenning # Journalism .

Die Presse is a national Austrian daily newspaper thatis published in Vienna,belongsto the Styria Media Group and, according to its editorial line, represents a “bourgeois-liberal view”.

Die Presse , like other quality newspapers , has the greatest reach among readers with a high school diploma or with readers with a household income of 3,000 euros (or more) per month. 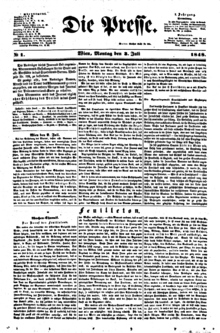 The newspaper was founded at the time of the March Revolution in 1848 by entrepreneur August Zang based on Parisian models (including La Presse by Émile de Girardin ) under the name "Die Presse" - the first edition appeared on July 3 - and was - in comparison with other newspaper foundations that year - a rather moderate to conservative sheet. After the revolution was suppressed and most of the newspapers were shut down, it fell more and more to the “left” edge, until it was discontinued on December 8, 1849 by the military administration of Vienna because of its increasingly oppositional editorial line . Zang tried a fresh start by re-publishing the newspaper from Brno - where there was no state of emergency - but had to give up this venture in December 1850.

It was not until 1851 that Zang was able to obtain official approval for the resurrection of the "press", which appeared again in Vienna on September 25th, based on personal relationships. In 1858 Zang sold half of the newspaper for 200,000 guilders to the Austrian Creditanstalt for Trade and Commerce. In 1864 there was a falling out between Zang and the editorial team, which resigned almost completely and founded the "New Free Press". Zang succeeded in putting together a new editorial team (including Eduard Warrens ), but the old “press” soon lost importance compared to the “new free press”. In 1867 Zang parted completely with the "press" by selling his remaining stake to the government. From then on, this ran the "press" on a semi-official basis under the direction of a special consortium and in turn sold the stake to a bank in 1888. The last edition appeared on October 31, 1896, after which the "press" was finally discontinued.

The "Neue Freie Presse" (NFP), founded by the former editors of the "Presse" Michael Etienne and Max Friedländer and their administration manager Adolf Werthner , first appeared on September 1, 1864 and soon established itself as the leading journal of the Habsburg monarchy , especially the liberal one Educated bourgeoisie was read. This is not least thanks to the prominent authors who worked for the newspaper, such as Karl Emil Franzos , Eduard Hanslick , Theodor Hertzka , Theodor Herzl , Hugo von Hofmannsthal , Felix Salten , Alice Schalk , Arthur Schnitzler , Berta von Suttner or Stefan Branch . Even today the "press" occasionally refers to the fact that Karl Marx also worked as a correspondent from London for the "NFP" at times; but the relationship was short-lived and the majority of the articles he wrote were not accepted by the editors.

After Friedländer's death (1872), Etienne was solely responsible for the editorial section of the “Neue Freie Presse”. Friedländer's shares in the newspaper were taken over by the Österreichische Journal-AG , founded on June 17, 1873 , whose investor was the Wiener Börsenbank and, subsequently, the Anglo-Austrian bank.

Benedikt is said to have acquired all the shares in the "Österreichische Journal-AG" and thus also economically mastered the "Neue Freie Presse". However, proof of this is no longer possible today.

Karl Kraus criticized the newspaper and its editor Benedikt extensively. For him it was clear that the "fact that there is no wickedness that the editor of the Neue Freie Presse cannot defend for real money, and that there is no value that he is not prepared to deny out of idealism ..." in his Play: " The last days of mankind " he called Benedict the "master of the hyenas" and quoted the war reporter for the Neue Freie Presse, "die Schalk" .

After the invasion of German troops on 12 March 1938 and the " connection of Austria" to the German Reich , the newspaper was "arisiert" , the 22 Jewish editors of the total of 37 persons comprehensive editorial board were fired on March 13 immediately. Among them was the last editor in office since 1918, Julian Sternberg. Instead, 13 new editors, Austrians and Germans, were hired. Than in June 1938 Editor Law was introduced in Austria, all of which were hitherto remaining Jewish editors dismissed that the Aryans evidence could not provide. The newspaper was brought under National Socialist control and the publisher, Oesterreichische Journal AG , was expropriated on June 18, 1938. An innovation in the sheet was the introduction of an imprint .

The Neue Freie Presse appeared for the last time on January 31, 1939 and was then merged with the popular “ Neue Wiener Journal ” to form the “ Neue Wiener Tagblatt ” . The last edition of the newspaper "Morgenblatt" appeared on September 30, 1938.

The following important information is missing from this article:
An extensive redesign took place at the end of 2013.
Help Wikipedia by researching and pasting it .

After the Second World War , the spiritual tradition was resumed under Ernst Molden . Initially, Molden suffered a number of setbacks: the newspaper's archive was destroyed, the printing presses were transported to Upper Silesia by the Nazis ; the naming rights of the newspaper had come into the possession of a Berlin Nazi publisher.

Nevertheless, the first edition appeared on January 26, 1946. Due to the paper shortage at the time, the newspaper was initially published weekly (every Thursday ). It was one of the first independent newspapers to be founded in the Second Republic. The newspaper has been published daily since October 19, 1948, which initially brought about a massive drop in circulation and subscribers and plunged Die Presse into a severe financial crisis. Fritz Molden , the son of the publisher Ernst Molden, managed in 1950 to obtain a loan of two million shillings in New York and thus to save the newspaper. In 1952 he took over 50% of the newspaper shares as publishing director, and in 1953, after the death of Ernst Molden, he took over the chief editor.

In the so-called Vienna Newspaper War of 1958, Die Presse under Fritz Molden played a key role.

In 1973 Die Presse was voted "Newspaper of the Year" together with the Washington Post . In 1985, the newspaper was the first in Europe to introduce remote data transmission to the print shop in full-page make-up . A format change took place in 1993 from the Rhenish to the Berlin format .

In the 1990s, the ownership structure changed. In 1991, Styria Medien AG , which itself essentially (over 98%) belongs to the “Katholischer Medien Verein Privatstiftung”, became a 51% majority shareholder. In December 1999, Styria also took over from the “Association for the Promotion of the Free Bourgeois Press in Austria” Minority share of 49% - since then the “Presse” publishing house has belonged entirely to Styria Medien AG.

According to its own definition, “Die Presse” represents a bourgeois-liberal basic line and sees itself in the tradition of the revolution of 1848 ( Frei since 1848 ). Rainer Nowak has been the editor-in-chief since 2012 . The newspaper appears from Monday to Saturday in an evening and a slightly changed morning edition, consistently colored, with an average of 32 pages on weekdays and around 50 pages on Saturday.

"Die Presse" publishes the "Rechtsspanorama" on Mondays, an educational section appears on Wednesdays, and the Schaufenster magazine is enclosed on Fridays . On Saturdays, the sections Careers , Real Estate, Travel and the weekend supplement Spectrum are also published .

Since March 15, 2009, the "Presse" has also appeared in its own Sunday edition with the name "Die Presse am Sonntag". Ulrike Weiser and Christian Ultsch also take on the editorial management. "Die Presse am Sonntag" is the first quality newspaper published on Sundays and thus addresses people who "like to read". The modernized presentation also appeals to a younger target group. “Die Presse am Sonntag” consists of the sections Politics , Vienna , Eco, Knowledge, Sport & Games, Life, Globe, Culture and Debate. In the silent sale , the press on Sunday will also include the career, real estate and education sections of the Saturday edition.

"Die Presse" is a cooperative of Austria Press Agency and a member of, among others, Bill Gates and George Soros funded Project Syndicate .

Editors-in-chief of the press 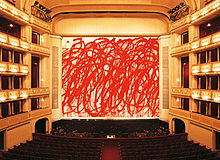 In addition to the print edition, Die Presse also has extensive information on the Internet and Teletext from ProSieben Austria with DiePresse.com . Together with the ORF , the press has been awarding personalities from the categories of science , business and humanity to Austrians of the year every year since 2004 . From 2008 to 2013, Die Presse made possible the “Iron Curtain” exhibition series conceived by museum in progress , which transforms the fire protection wall between the stage and auditorium into an exhibition space for contemporary art in the Vienna State Opera . The curtain is designed by a new artist for each season.

In 1998 the newspaper “Die Presse” received a reprimand from the Austrian Press Council . The reason given was the publication of the article “Mass graves in Kosovo. Hundreds of children buried? ”On page 1 of August 5, 1998 about alleged mass graves in Orahovac, the impression was given that the facts were confirmed, although the inside correspondent's report correctly only refers to the assumptions and conclusions of eyewitnesses. In particular, the allegation that more than 400 children were found in mass graves in Orahovac has not been confirmed and should therefore have subsequently been unequivocally corrected. For the verdict of the press council, therefore, it was not the Yugoslavia coverage of the press as a whole that was relevant, but the handling of a specific error.

Since 2014, the press has published a list of the most influential economists every year .

In April 2015, the first magazine in the series “Die Presse” - History of the Ringstrasse was published, and by June 2018 eight more magazines from different subject areas followed.

The Schaufenster is one of the oldest magazine supplements in the world and is a weekly lifestyle and cultural supplement to the daily newspaper “Die Presse”. It is included in the Friday edition.

Commons : The Press  - Collection of images, videos and audio files