View of Brno from the Spielberg fortress

Brno ( Czech Brno listen ? / I ), with about 380,000 inhabitants after Prague , the second largest city in the Czech Republic . The town, which has been the historical center of Moravia since the 17th century , is today the administrative seat of the South Moravian Region ( Jihomoravský kraj ). Brno has several universities, is an important research location and the seat of the Brno diocese of the Roman Catholic Church of the Czech Republic .

All organs of the highest Czech judiciary are located in Brno . These are the Constitutional Court of the Czech Republic ( Ústavní soud ), the Supreme Court ( Nejvyšší soud ), i.e. the highest instance of ordinary jurisdiction, the Supreme Administrative Court and the General Prosecutor's Office . The city is also the seat of the Czech ombudsman and the highest competition authority .

The city has an important position as a strong industrial, commercial, cultural and administrative center. In a spacious area, the Brno Exhibition Center in the Pisárky district, several important trade fairs for the Czech economy take place every year .

Brno lies on the south-eastern edge of the Bohemian-Moravian Highlands . The river Svratka and the Svitava , which comes from the town of Svitavy and flows into the Svratka at the southern city limits, flow through the town . At the north-western city limits, the Svratka is dammed into an approximately 9.5 km long and at its widest point approximately 600 m wide reservoir Brněnská přehrada .

The prehistoric settlement Eburodunum mentioned in the work of Ptolemy was probably located in today's urban area .

Brno Castle was built between 1021 and 1034 and later gave its name to the adjacent settlement. The settlement of Brno was mentioned for the first time in 1091. The city was founded in 1243 by Wenceslaus I as a royal city (Bohemia) . The Špilberk fortress is mentioned for the first time in 1277 as a castle. From 1349 Brno was the seat of the Marquis of Moravia . In 1641 Brno replaced Olomouc as the capital of Moravia .

The Měnín Gate, the only preserved city gate

In the Thirty Years' War Brno was besieged unsuccessfully by the Swedish general Lennart Torstensson in 1643 and again between May 4 and August 23, 1645 . Brno replaced the destroyed Ölmütz as the capital of Moravia. About a hundred years later, on March 29, 1742, the First Silesian War brought Prussian troops to the city.

In 1805 the battle of Austerlitz between the Austrian and Russian armies on the one hand and the army of the French emperor Napoleon I on the other took place near the city . Napoleon Bonaparte visited Brno twice that year: from November 20, 1805 stayed until the night of November 29, after his victory he stayed again from December 7 to 12. In September 1809 he came back to the city, where his army had been waiting for him since July 13th. In the French park Lužánky ( German : Augarten ), newly founded by Emperor Joseph II from 1786–1787 , Napoleon's soldiers and the Brno dignitaries held a belated birthday party for the French guest (Napoleon had turned 40 on August 15, 1809). On Napoleon's orders, the Brno city fortifications lost their function as fortresses, but remained as structures.

On July 7, 1839, the railway connection to Vienna was opened, a section of the first long-distance railway in the Austrian Empire . Shortly after the establishment of the Ringstrasse as an example the now long since useless fortifications were demolished, instead of the "hills" was begun in 1860/61 after plans by Ludwig Förster also a ring road . Some of the green spaces remained, some of them were framed by representative buildings such as the main train station or today's Mahen-Theater (by Fellner and Helmer).

Around 1900, Brno had a predominantly German-speaking population (63%), while the suburbs outside the city center, which were not part of the Brno urban area until 1918, were predominantly Czech-speaking. Life in Brno was therefore bilingual and “Brno” can be understood as a mixture of the two languages.

After the First World War , almost 55,000 German-speaking citizens lived in Brno. These included predominantly the approximately 12,000 Jewish citizens living in the city, among them several well-known personalities who played a key role in the city's cultural life. In 1930 around 52,000 residents declared themselves German and 200,000 Czech, including Jewish residents of both nationalities. 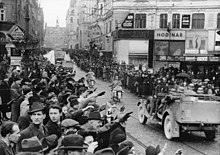 After the establishment of the Protectorate of Bohemia and Moravia in March 1939 and the beginning of the Second World War , the systematic persecution of Jews began in Brno as well. By the end of the war, 9,064 Jewish townspeople were deported from Brno to various concentration and extermination camps ; only about 700 of them survived. Stumbling blocks and memorial stones in memory of the victims of National Socialism have been laid in Brno since 2010 .

During the German occupation, there was a German regional court in Brno from April 14, 1939, and from 1940 also a special court.

After the end of World War II , the German-speaking population was forced out of the city of Brno marketed unless they lived in mixed marriages. Their property was confiscated by the Beneš decree 108 , the property of the Protestant church was liquidated by the Beneš decree 131 and the Catholic city churches were expropriated . The Czech Republic made no compensation for the confiscated assets. In the Brno death march (beginning on May 31, 1945) around 27,000 mostly old and young citizens had to march to the Austrian border, 60 km away. According to the accounts of those involved, around 5,200 people were killed, "officially" documented 2,000 deaths. In 2015, the Brno city council regretted the eviction and invited representatives from associations of IDPs to a joint memorial .

During the period of Czechoslovak socialism , Brno maintained its position as one of the country's leading industrial cities. Prefabricated housing estates were built on the outskirts for the steadily growing population .

As of December 31, 2014, Brno had 377,440 inhabitants (official information from the Czech Statistical Office), making it the second largest city in the Czech Republic.

Panoramic view from the southwest

In addition to the Czech Moravian form, the town language Hantec was used in Brno until the 20th century , a Czech dialect with a proportion of German loanwords. The Hantec seemed to be forgotten more and more by the turn of the millennium. Since then, the Hantec has again appeared more frequently in local culture and in everyday dealings.

Brno is a statutory city . The urban area is identical to the Brno-City district . Brno is also the administrative center of the Jihomoravský kraj (South Moravian Region).

The city of Brno is divided into 29 urban districts, of which 58 districts belong: 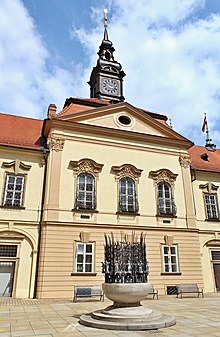 The elected city council ( Zastupitelstvo města Brna ) has 55 members. They elect the city government ( rada ) and the mayor ( primátor ) from among their ranks .

Brno has twinned cities with the following cities:

In 1953, the city ​​of Schwäbisch Gmünd sponsored all expelled Germans from the city of Brno.

The historic city center was declared an urban monument reserve in 1989 .

The Museum of Roma Culture was opened in Brno in 1991 as the first of its kind in the world; the Technical Museum in the Královo Pole district reopened in 1997.

The Dům umění ( House of Art ) was built between 1908 and 1911 as the Emperor Franz Joseph's jubilee artist house.

The Brno Filharmonic Orchestra has its concert hall in Besední dům.

Because of numerous buildings of Moravian functionalism , Bettina Hartz called Brno the "Tel Aviv of the North".

Bishop's Court and Cathedral of St. Peter and Paul

Brno has, among other things, a cycling track on which the 1981 track cycling world championships were held. The lift opened in 1974, is open and has a 400 meter long concrete runway. The Brno Automotodrom is located on the western edge of the city . Brno is also traditionally home to major football and ice hockey clubs: at the moment it is the FC Zbrojovka Brno football club and the HC Kometa Brno ice hockey club .

From the 19th century Brno developed into a strong industrial city. In the beginning, the textile industry was particularly important. The traditional companies include or belonged to the arms and mechanical engineering factory Československá zbrojovka as Brno (today: Zbrojovka Brno as), the tractor manufacturer Zetor and the mechanical engineering company Královopolská (founded in 1889 as Lederer-Porgess Königsfelder Maschinenfabrik ). Slévárna Heunisch Brno ( Heunisch-Guss ) was added in the summer of 2006 through the takeover of the Zetor foundry .

Today Brno is a trading center and an important trade fair city. Around 50 trade fairs are held annually. Numerous research institutions and universities make the city an important research center. The tallest skyscraper in the Czech Republic is in Brno, the AZ Tower , which was built in 2013 .

The Automotodrom Brno ( Masaryk Ring ), a motor racing circuit, is located near the city .

Brno is an important railway junction. In 1839 the city was connected to the Austrian Northern Railway . Today the city is located on a European railroad . There are direct Eurocity trains Budapest / Vienna - Prague - Berlin - Hamburg . On the Prague - Brno route, the maximum speed limit for trains is 160 km / h, but this can only be reached by Eurocity trains. The line is part of the so-called "First Railway Corridor", a modernization program planned since the mid-1990s.

For some time now, the construction of a new train station has been planned instead of the old train station , which is outdated in terms of traffic technology . Its building, as well as the neighboring post office, are listed. The new building is planned around 800 meters south of the previous station. There is lively resistance to this urgent project (from the point of view of the city representatives). Financing has not been clarified either.

The D1 motorway leads from Prague via Brno towards Ostrava . The D2 motorway connects the city with the Slovakian border and continues to Bratislava . A trunk road connection from Brno to Vienna exists, on the Austrian side in the form of the A5 motorway , but needs improvement on the Czech side.

A system of inner-city motorways, the so-called Great City Ring ( Velký městský okruh ), has been built in Brno for several years . This includes four already passable tunnels. The most elaborate tunnel with a length of 831 m was built under the Královo Pole district ( Královopolský tunel ). The noise protection of the Königsfeld tunnel was improved again after citizen protests and court judgments. The delays in the construction of the tunnel of at least three months have led to considerable increases in costs. The total cost of the tunnel has been provisionally estimated at around seven billion crowns (around € 280 million), but has not yet been officially confirmed. The Königsfeld tunnel was presented to the public on June 2, 2012 as part of an “open day” and opened to traffic on August 31, 2012.

Brno International Airport ( IATA airport code BRQ, ICAO code LKTB) is located in the Tuřany district about ten kilometers east of the city center. There are regular flights to the cities of London, Milan and Berlin from here. In 2018, 500,000 passengers were carried.

→ Main article : List of personalities of the city of Brno

In the 1950s and 1960s the Viennese emcee Heinz Conrads liked to sing the song How Bohemia was still with Austria, / fifty years ago, fifty years ago / my father got himself from Brno / a real Viennese. The singer Peter Alexander , who is known throughout the German-speaking region , also had this song in his repertoire.

Brünner Straße exists in the north of Vienna .