The inscription: KAIS. FERD.-NORDBAHN at the main station in Bielitz-Biala

The Vienna North Railway Station in 1908 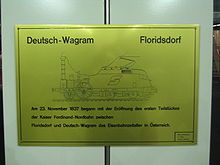 Share over 1000 guilders of the Emperor Ferdinand's Northern Railway from July 1, 1857

The kk privileged Kaiser Ferdinands-Nordbahn (KFNB) (Czech. Ck priv. Severní dráha císaře Ferdinanda , from 1919 officially Severní dráha Ferdinandova ; SDF) was a railway and mining company in Austria and its successor state in Czechoslovakia . The main line of the company was the Northern Railway from Vienna to Northern Moravia and Austrian Silesia , with a continuation planned from the beginning to Krakow and Bochnia because of the Galician salt deposits . The railways were, with the exception of mining railways nationalized in 1906, the mining division existed until 1945 as an independent company on.

The Viennese geologist and mining expert Franz Xaver Riepl had the idea in 1830 to build a railway line from Vienna to the North Moravian iron and coal deposits and the important Witkowitz ironworks , which have been based on them since 1820 , near Ostrau and even further to the Wieliczka salt mines south of Krakow to build. He succeeded in winning Salomon von Rothschild , who already had strong interests in Witkowitz, as financier for the company. Riepl was sent to England to gain experience in railway construction. After his return, Rothschild made a first request to the Emperor, Franz I , which was refused (Crown Prince Ferdinand commented that not even the car to Kagran was always full). Despite the rejection, preparations for the railway construction continued. Rothschild bought a horse-drawn railway lying on the route, Riepl worked on the planning of the route.

Shortly after the emperor's death, Salomon Rothschild submitted another application, which was approved by the new emperor Ferdinand I , also thanks to the support of Prince Metternich and Count Kolowrat .

On March 4, 1836, Rothschild received the unlimited privilege to build a steam railway between Vienna and Bochnia and proposed the name Kaiser Ferdinand's northern railway . With a length of about 600 kilometers it was one of the longest as a locomotive outside Great Britain. The privilege included branch lines to Brno , Olomouc and Opava .

To build the railway line, a stock corporation was founded, on whose supervisory board Metternich and Kolowrat were also members. Rothschild kept 8,000 of the first tranche of 12,000 shares, and there were 27,490 subscribers for the remaining 4,000, which immediately drove the price above the issue price of 1,000 guilders per share. However, the company only built the line to Oderberg (now Bohumín ) or later to Dzieditz (now Czechowice-Dziedzice).

Georg Simon Freiherr von Sina , the largest competitor of the Austrian Rothschilds, and the banking house Arnstein & Eskeles tried to delay the company. At the second shareholders' meeting, Ludwig von Pereira-Arnstein made allegations regarding technical planning and projected costs. Rothschild and Riepl were only able to refute the allegations at least partially with difficulty. In October 1836, Rothschild finally applied to either begin construction or to dissolve the company. He won the vote by 76 out of 83 votes, Sina and Arnold & Eskeles were forced to resign.

Before the nationalization that began in the 1890s (see kk Staatsbahnen ), the development of the Austrian railway system often depended on the personal commitment of the donors, who were sometimes fierce competitors.

Construction of the trunk line

In 1837, under the direction of court building officer Hermenegild von Francesconi , who came from Veneto, construction work began on the 13 km long section Floridsdorf - Deutsch-Wagram . About 10,000 workers were used under the supervision of English specialists. The extension to Lundenburg took place quickly under the direction of his chief engineers Kudriaffsky and Bretschneider. The branch to Brno was directed by Carl Ghega, who later became Carl Ritter von Ghega , also from Veneto, who later became famous for the construction of the Semmering Railway.

In March 1837 the first six locomotives arrived from George Stephenson's factory in Newcastle and from Tayleur & Co. in Warrington , which were disassembled and brought by ship to Trieste and from there by wagons over the Semmering to Vienna. A specialist from Stephenson's factory, two English “charioteers” and four machinists took over the training of the Austrian staff on a test track in the Vienna Prater . Carl Grundmann became the first Austrian train driver on the Northern Railway in 1838 and thus the first ever German-speaking train driver in the monarchy. He saved the life of Emperor Ferdinand in the turmoil of the revolution in 1848 by safely taking the court train to Olomouc on October 7th and receiving the “imperial privilege to found a locksmith's factory” as a reward, which he moved from Vienna to Herzogenburg in Lower Austria in 1874 . This quickly developed into the largest lockware manufacturer in the Danube Monarchy with almost five hundred employees.

On November 13th and 14th test drives were carried out on the 13 km long route between Floridsdorf and Deutsch-Wagram and on the 19th and 23rd the first test drives took place. On the last day, invited guests were also allowed to ride. November 23, 1837 is therefore considered to be the opening date of the first steam train in Austria .

The first scheduled passenger train left Vienna's Nordbahnhof on January 6, 1838 at 9:30 a.m. with 218 paying passengers . The next section via Lundenburg (Břeclav) to Brno went into operation on July 7, 1839. Accidents on July 7th and October 30th of that year temporarily impaired the reputation of the railway. In October 1841 the line from Lundenburg (Břeclav) to Olomouc (Olomouc) was completed. From 1845 there was a connection to the Imperial and Royal Northern State Railway to Prague . On April 1, 1847, the trunk line reached Oderberg (Bohumín). On September 1, 1848, the Prussian Wilhelmsbahn established the connection from there to the Upper Silesian Railway . This had in Myslowitz (Mysłowice) connection to the Kraków-Upper Silesian Railway, which opened on October 13, 1847 . The first rail link between the two cities of Vienna and Krakow, which were important for the Habsburg Monarchy at the time, included more than 100 km of lines in Prussian ownership and national territory.

A running exclusively on Habsburg territory railway connection from Vienna to Krakow came at 1 March 1856 about when the now to the Eastern Imperial State Railways nationalized Krakow Upper Silesian Railway with a branch line of Trzebinia over Auschwitz (Oswiecim) to Dzieditz (Dziedzice) closing the gap produced . Two years later, the Emperor Ferdinand's Northern Railway took over the route to Krakow.

Further development of the railway company

The railway lines of the KFNB were transferred to state ownership on January 1st, 1906; From January 1, 1907, the kk state railways took over operations. The Montanbahn Mährisch Ostrau-Dombrau and all other property such as the coal mines there remained in the property of the company.

After the First World War, the company continued to exist in the newly founded Czechoslovakia as Severní dráha Ferdinandova (Ferdinand's Northern Railway; SDF), and the ČSD took over the operation of the coal and steel railway .

After the end of the Second World War in 1945, the still independent mining division of the company was nationalized based on the Beneš decrees and merged with other companies in the Ostravsko-karvinskékomouhelné doly group. From then on, the mining railways belonged to the OKR Doprava division, which was finally merged into OKD Doprava in 1994 . Today they are part of the PKP Cargo International network .

Local railways owned by the KFNB

Since the beginning of the procurement of locomotives by the KFNB names have been used to denote . Greek or Roman names for gods and heroes, names that expressed power and speed, Latinized names of places and landscapes, and American names of places and states were common.

In the annual report of 1841, consecutive numbers appear next to the names for the first time . There was no change in these numbers until 1850. After that, the first decommissioning began, which was reflected in "postponements" in order not to have any gaps in the inventory numbers.

In 1861, the KFNB returned to the numbers from 1841, taking into account the newly added machines. Namely, they had started to use the names of retired locomotives for new constructions, which now also got the numbers of their predecessors. This created a "name-based order" at the expense of a closed number system. Rivers and places in the catchment area of ​​the railway were now used as names.

Around 1857 the performance-related class division (0 – V) that is common at the state railway was also introduced at the KFNB, whereby category 0 remained empty, but a category VI was added to the 12 supplied by Borsig with serial numbers 815–820 and 828–833 Piece of freight locomotives belonged to.

Starting in 1865, the inventory number assigned to it was written or stamped on the lower edge of the nameplate for every new locomotive. But this was not done with older machines.

Since the KFNB's locomotive park had become quite extensive and confusing by 1869, the locomotives were grouped together, denoted by 0 and the Roman numerals from I to X. The lower case letters a - c were used for further subdivision . Names and inventory numbers remained unchanged.

In order to create order in the numbering system, a completely new numbering scheme was introduced from 1871 to 1873.

The thinning of the groups in the scheme from 1869 to the complete disappearance of some groups forced a new scheme to be introduced. Again were Roman numerals from I to X , and lowercase letters, this time a - e used. In addition, index numbers from 1 to 3 were assigned for a finer subdivision. In Group IX completely different local railroad locomotives were assembled. In this scheme, the inventory numbers are not causally related to the groups.

Later on, the numbering scheme became increasingly confusing due to second and third occupation of numbers (and names).

In 1893 the KFNB ended the naming. A strange coexistence of Greek gods and Moravian villages had arisen. The end of naming was justified by the increasing number of locomotives, so that finding names that were supposed to be based in the catchment area of ​​the railway became more and more difficult. The decision as to whether German or Czech names should be used became increasingly conflictual.

The locomotives that were procured from 1837 to 1842 fall into the first locomotive procurement period of the Kaiser Ferdinands-Nordbahn. In the early days of the KFNB, locomotives were differentiated by name , but as early as 1841 they were also given numbers . The summary of locomotive types was not yet in practice at that time, as each machine was a one-off production. Only sometimes were several locomotives of the same type ordered at the same time. Greek or Roman names for gods and heroes, designations that expressed power and speed, Latinized names of places and landscapes, and American names of places and states were common names.

The first KFNB locomotives were dismantled, delivered by sea and land from England or America, and it was not until 1840 that the first PATRIA locomotive was built in Austria.

The first period of locomotive procurement at KFNB included the following machines:

From around 1844, the KFNB began to procure their locomotives in larger series. The machines were no longer procured from England and America , but from Belgium , Germany or Austria itself.

The second period of locomotive procurement at KFNB included the following machines (types):

Locomotive rows that came to the kkStB

Locomotives procured for the Montanbahn after 1919

In the years 1927 and 1930, the operating company ČSD purchased a total of twelve heavy tank locomotives from První česko-moravská / ČKD in Prague for the operation of the mining railway. They were carried by the ČSD as class 514.0 .