This article covers the city in the Czech Republic. For the place in Slovakia see Opava (Slovakia) . For the tributary of the Oder, see Opava (river) .

Opava ( pronunciation ? / I ; German: Troppau ) is a city in the Moravian-Silesian Region in the Czech Republic .

The city is located 247 meters above sea level in the Troppauer Bay ( Leobschützer Lösshügelland, Czech Opavská pahorkatina ) on the right bank of the Oppa , which above the city includes the Velká and Pilšťský potok and below the Kateřinský potok and the Mohra , near the Polish border .

In the 12th century a Moravian-Polish trade route crossed the Oppa River north of Grätz Castle . German emigrants called into the country by the Piast Duke Heinrich I settled at this favorable location for settlement at the end of the century . The settlement was first mentioned in 1195 under the name "Opavia".

By commerce and trade, especially cloth making, the site quickly became the center of the "Terra Opavia" so that by which he already 1224 Bohemian King Otakar I the Magdeburg rights received and the royal town was named. In addition to the numerically largest German population group, Czechs and Jews also lived in the city. The Teutonic Order residing here at that time built the town church of St. Mary. In addition to the order of knights , the Johanniter , Franciscans and Dominicans also settled. 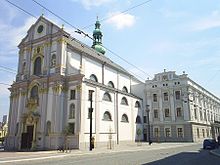 In 1241 Mongols invaded the city and caused great damage. In 1284 Opava was given the right to stockpiles , with which the passing merchants were forced to offer their goods in the city. In 1318 the ducal court of the Duchy of Opava, founded in 1269 with Duke Nikolaus I , was relocated from Grätz to Opava. In 1325 blood jurisdiction was granted . Duke Přemysl I built a castle around 1400, which initially served as a fortress, later converted into a chateau and demolished after it fell into disrepair in 1891.

In the 15th and 16th centuries the rulers changed in quick succession. In 1460 the Bohemian Podiebrad family acquired the city, but in 1485 it was already handed over to the Hungarian King Matthias Corvinus , who was succeeded by his son Johann in 1490. Between 1501 and 1511 Sigismund I of Poland was lord of the city.

At the latest with the takeover of the Duchy of Troppau by the Habsburgs in 1526, the German place name Troppau prevailed for the next centuries. Since 1613, the respective ruling Prince of Liechtenstein has also held the title of Duke of Troppau . In 1625 the Jesuit order was called to Opava and five years later the Jesuit grammar school was founded. Then there was the Jesuit Church (1675–1680). The single-nave early baroque hall construction with a mighty barrel vault (1675/79), with frescoes by Franz Xaver Steiner (1731) in the interior, is considered the most splendid church interior, the "Pearl of Silesia". The church was almost completely destroyed in March 1945, but could be rebuilt by 1947. The Baroque appearance of the Jesuit College on Snemovni Street dates back to the years 1711 to 1723. After the dissolution of the order in 1773, this building became part of the estates and initially served as the seat of the Silesian Landtag , today it houses the Troppauer Landesarchiv.

After the Piast dying out in 1675, Opava and the neighboring duchies were part of Silesia , which was ruled by Habsburg as the land of the Bohemian Crown . When most of Silesia was lost to Prussia after Austria's defeat in the Seven Years' War , only the Troppau and Teschen regions remained with Austria.

From October 20 to December 20, 1820, the rulers of Austria, Prussia and Russia met in Troppau for the so-called Troppau Prince Congress , which was held on the occasion of the civil uprising in Naples . After the construction of the Emperor Ferdinand's Northern Railway Vienna - Cracow , which opened in 1845, Troppau was soon connected to the railway network through the Schönbrunn (now Ostrava -Svinov) - Opava - Ziegenhals connecting line opened in 1847 . (Around 1900 the trip to Vienna could be done in five to seven hours; direct through coaches from Vienna to Opava were used.) The construction of further routes from Opava to Bennisch and the neighboring Prussian Silesia created a railway junction. This had a positive influence on industrial development, and brickworks, a sugar refinery and several textile factories were established there. Urban transport mastered in 1905 a tram , in 1956 by the still existing trolley bus was replaced -Netz.

After the introduction of the Austrian constitution of 1849 , Opava became the capital of the Crown Land of Silesia, officially also the Duchy of Upper and Lower Silesia .

In addition to the state government and the Silesian state parliament, finance directorate and regional court, Troppau housed the Chamber of Commerce and Industry, German and Czech grammar schools, teacher training institutes, public library (over 35,000 volumes), state hospital, state lunatic as well as several other public institutions at the end of the 19th century. The number of inhabitants rose to 22,867 by 1890 (including 2,423 Czechs and 377 Poles).

With the establishment of Czechoslovakia after the First World War , the city became Czech in 1918/19; the claim of German Austria to Austrian Silesia could not be realized. Opava remained the administrative seat of Czech Silesia until 1928, when the area was united with Moravia .

With the Munich Agreement , the city came under German administration in October 1938, and the Troppau district was formed. On April 1, 1939, Opava became the seat of the administrative district of the same name in the Reichsgau Sudetenland . On May 1, 1939, the neighboring communities Gilschwitz, Jaktar and Katharein were incorporated. This increased the population to 45,740.

After Soviet troops conquered the city in the course of the Moravian-Ostrava operation on April 22, 1945, Troppau was reintegrated into Czechoslovakia. The German residents were expelled due to the Potsdam Agreement and the Beneš decrees ; the majority of them settled in Bamberg .

In 1991 the Silesian University was founded.

Assumption of the Virgin Mary co-cathedral (2008)

In the present day Opava is regaining the status of an important business and cultural center.

The city of Opava is part of the industrial urban center of Ostrava ( Ostrava ) and mainly produces mining equipment ago. One of the largest sugar factories in the Czech Republic, which belongs to the Austrian Agrana Group, is also located here .

Before the war, the spirits manufacturer E. Lichtwitz & Co. was particularly important. Opavia is a manufacturer of sweets from Opava. His bath wafers are known nationwide .

It is the seat of a number of scientific and cultural institutions that are of national importance, such as B. the Silesian State Museum . Until 1993, part of the Czech Academy of Sciences was located in Opava. The bank compartment is also widely represented here.

The Silesian University of Opava is located in the city . 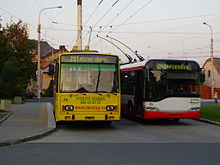 Tram
From 1905 to 1956 there was a tram service in Opava . After the destruction towards the end of World War II, the entire route network could not be used again until 1947. However, sections of the route were closed for the first time as early as 1950.

Trolleybus
After it had been decided in 1950 to replace the tram with trolleybuses , the construction of the first trolleybus connection began in 1952, which was put into operation the following year.

Today there are 11 lines with the line numbers 201 to 210 and 221. On line 221 there are trolleybuses with auxiliary diesel units, because five stops have no overhead lines. Six Solaris Trollino 12 buses and two Škoda 26Tr Solaris buses are available for this. They are to be replaced by ten Škoda 32 Tr from September 2018. These receive a 41 kWh lithium titanate oxide battery, which enables an 8 km long trip without overhead lines.

Those born in Troppau, regardless of their place of work, in chronological order by year of birth.

Other personalities and mayors