An okres (plural okresy ) is the national language name of a territorial unit in the Czech Republic , Slovakia and formerly Czechoslovakia . It is the second level of the administrative structure that stands between the Kraj and the municipalities (Obec). The German translation is inconsistent, such as "Bezirk" or "Kreis".

The political districts in the Bohemian Lands in 1900

During the time of the Reich Protectorate of Bohemia and Moravia , the political districts largely continued to exist, while rural and urban districts were introduced in the Reichsgau Sudetenland .

In 1946 the subdivision of the Okres unit was partially restructured. On February 1, 1949 and April 11, 1960, a major territorial reform took place in Czechoslovakia, in which the number of districts was reduced.

Since the division of Czechoslovakia in 1993, the districts have continued to exist in both the Czech Republic and Slovakia . The district offices were abolished in both countries, but the okres is still assigned to the LAU-1 level (Local Administrative Unit) in the NUTS categorization for official statistics in the EU, i.e. it represents a level of local government . 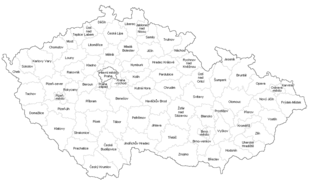 Okresy in the Czech Republic since 2007 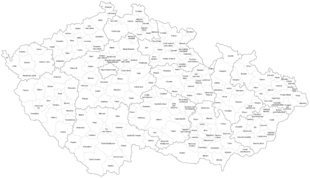 Districts in the Czech Republic

In the Czech Republic, their competencies were reduced on January 1st, 2000 with the introduction of the higher self-governing territorial units - Kraje (districts). With effect from January 1, 2003, the district authorities (Czech okresní úřady ) were abolished and the competencies were partly transferred to the districts, but mainly to the municipalities. Their previous responsibilities were partially taken over by the local authorities and partially by so-called ORP municipalities. ORP (= Obec s rozšířenou působností) means communes (cities or municipalities) with extended powers (also referred to as 3rd degree municipality). There are currently 205 such ORP communities in the Czech Republic, see map.

The division continues to be used as a territorial and statistical unit. At the head of these administrative units (in contrast to the German district office and similar to Austria) were not elected, but professional bodies. On January 1, 2007, the boundaries of the districts in the Czech Republic were changed in such a way that smaller municipalities are always located in an okres, to which the responsible neighboring municipality with extended administrative activities belongs.

The responsibilities of the Okres unit were also reduced in Slovakia. Okres is only a formal unit. The district offices (Slov. Okresný úrad ) were abolished and replaced by offices for several units of the okres ( obvodný úrad ).

The districts were established in Austria in 1850, in German they were called political district , in Czech politický okres . The older higher regional unit Kraj continued to be referred to as a district. The okresy are therefore usually translated as districts, in accordance with the Austrian administrative tradition. When translating the word as a district, however, it should be noted that the word obvod is also translated as district , which on the one hand stands for the city district and on the other hand is the general name for various regional subdivisions (for elections, for the police, etc., in Slovakia also in the administrative unit created on January 1, 2004 between the Okresy and the Kraje).

Since this is a communal level, there is also “community circle” as a designation, also in contrast to “state district” for the Kraj.

The term okrsek (Czech) or okrsok (Slovak) is also used as a general term for various, rather smaller regional subdivisions (constituencies, etc. ). Linguistically, it is a diminutive of Okres.