This article explains the administrative unit Kraj, for other meanings see Kraj (disambiguation) .

Kraj (literally "land (-strich)") is the national language name for administrative units in the Czech Republic , Slovakia (Czech and Slovak plural kraje ) and Russia ( Russian край , krai; plural края , kraja ). The word is translated differently ("Kreis", "Bezirk", " Landschaftsverband ", etc.), especially in English (in the absence of other expressions) also as " Region ", which leads to confusion with the general term. "Region" is regularly used for Russia because these administrative units there tend to be more extensive than, for example, the oblasts ("areas") that are (today) at the same level .

In these three countries, as well as in many other Slavic-speaking countries, the term kraj , krajina is also used as a non-administrative term with the meaning of area , landscape . For example, Jantarny Krai (Bernsteinland) is an unofficial name used in Russia for the Kaliningrad Oblast (Königsberg region). 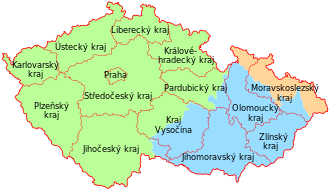 Today's Kraje and former countries in the Czech Republic

In the Czech Republic and Slovakia , the Kraj is the top level of the administrative structure ; it is translated both with “ district ” and with “ district ”. In both countries, it is in the NUTS categorization for the official statistics of the EU of Level 3 attributed.

The historical expression can already be found in the district division in Bohemia , which existed from the 14th century to 1862 and was also introduced in other parts of the Habsburg monarchy in the 18th century . The circle did not have the meaning that is common in Germany today, starting with the Kingdom of Prussia . The Bohemian meaning - district as the upper division of the territory - was also common in Bavaria and Saxony until the middle of the 20th century.

The Kraje were reintroduced in 1948 (13 in today's Czech Republic, 6 in Slovakia) with the dissolution of the countries ( země ) Bohemia, Moravia-Silesia and Slovakia. From 1960 to 1990 the former ČSSR ( Czechoslovakia ) was divided into ten large units (seven in today's Czech Republic, three in Slovakia), which are also the basis for the postcode system (Czech Republic and Slovakia) . These units are now mainly translated as districts in accordance with the European Union's IATE terminology database .

In a new territorial reform, the Czech Republic was divided into 14 self-governing regions ( Samosprávné kraje ) on January 1, 2000 . In 1996, eight districts were introduced again in Slovakia.

In Russia , 9 of the 83 top-level administrative units are currently referred to as "krai" ( край , krai; plural края , kraja ). Usually the term is translated into German as “region”. These are the Altai , Khabarovsk , Kamchatka , Krasnodar , Krasnoyarsk , Perm , Primorye , Stavropol and Transbaikalia regions, mainly economically well-developed parts of the country with a large area on the periphery. Kraje and Oblaste are on the same administrative level as federal subjects .

In the Russian Empire , Krai was a slang alternative term for the general government .