In technical and general language usage, the term Krajina stands for border area , mark - in the sense of Latin confinium, French marche - or border - in the sense of English frontier , border lands ; but not border , borderline , because linear, fixed borders only became the norm in the age of nation states. What is meant is a border line that is inhabited by a border population who may have formed their own border guards society.

The name was often used as a slang colloquial form of "Vojna krajina" for the Habsburg military border. The designation of the border area between Croatia and Bosnia-Herzegovina as "Krajina" or "Srpska Krajina" (Serbian Krajina) is not a historical term in this context and is not to be regarded as a continuation of the military border . The Croatian and Serbian designation of the historical military border " Vojna krajina" is an independent term that has been used since the early modern period to describe the areas of the military borders that meet in the " Triplex Confinium ", the "triple border mark". These are the areas of the Habsburgs, Ottomans and Venetians who meet here.

In today's Croatian and Serbian usage, the term Krajina is often narrowly applied to the Republic of Serbian Krajina, which existed between 1991 and 1995 and was not recognized . In other words, on the area partly or predominantly populated by Serbs (the descendants of the former Serbian military border guards ) along the Bosnian-Herzegovinian state border from Karlovac to the hinterland of Split with the core areas of Kordun , eastern Lika and the "capital" Knin in Dalmatia .

Kraj and Krajište (from which Alban. Kraja ) is a South Slavic toponym that denotes a border landscape ( Grenzmark ).

The toponyms Krajina, Kraj and Krajište are part of the names of many areas populated by Slavs, cf. the Ukraine (border region), the Uckermark , the military border ( Serbo-Croatian : Vojna krajina ), Carniola and much more

The term originally referred to Roman-Byzantine fortifications north of Dyrrhachium . To stem the onslaught of barbarians (devastation Docleas by Ostrogoths 489), was in the province of Dardania before Justinian I built a dense network of castles and fortifications (trenches, spanking, towers of wood and stone), which at Marcellinus and Procopius mentions becomes. In the 8th and 9th centuries this Roman-Byzantine Limes defied the onslaught of the Serbs and Bulgarians .

The extensive fortifications still existed in the Comnen times and were later important for the defense against incursions by the Normans and Anjouvines . The Serbian name "Krajina" for the area between the Bojana and Crmnica rivers comes from this period . The Dukljanin Chronicle mentions the seat of the Serbian Prince-Saint John Vladimir as locus qui Craini dicitur . Another Kraja near Debra is mentioned in 1273. Albanian heroic chants ( këngë kreshnikë = cantica heroica) sing about the warfare in the Krajina. As krajišnici (sing. Krajišnik ) were in the Codex Stephan Dušan's nobles, who had to compensate the emperor for all damage caused by plundering armies that had moved through the areas of the affected Krajišnici.

The Archdiocese of Krajina , active in the 15th century , with its center in the Prečista Krajinska monastery church near Bar , is said to be a failed attempt at reunification between Catholicism and Orthodoxy.

Part of the Serbian population in Croatia proclaimed the following areas during the Croatian War (1991-1995):

Differentiation from the term "Republic of Serbian Krajina" (Srpska Krajina) 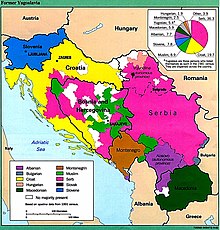 Ethnic composition of Yugoslavia according to the 1991 census (source: CIA)

During the Croatian war from 1991 to 1995 the term “Serbian Krajina” for “zapadne srpske zemlje” (= western Serbian countries) arose . The designation does not refer to a historically defined territorial entity, but should rather be used as an approximate geographical indication. The term "Krajina" in connection with ethnic majority ideas has always been used by Greater Serbian ideologues to validate Serbian expansionist territorial claims.

The Greater Serbian ideologies can be compared with the nationalistic concepts of the Pan-German Association . Here are ideologies of geopolitics coupled with demographic or military action: In order to be transformed into common areas, the original inhabitants of the occupied territories are deported and primarily its own people to be settled; a dictatorial administration is also required. This political concept, represented by Heinrich Claß among others , ties in with tendencies of the late 19th century to understand political boundaries not as legally binding lines but as dynamic spaces and subject them to a corresponding formation ( political geography ).