from Wikipedia, the free encyclopedia
This is the sighted version , which was flagged on April 15, 2021 . There is 1 pending change that has yet to be viewed.

This article covers the Germanic tribe. For the film see The Normans .

The term Norman is used in different meanings. On the one hand, it is used in German as a generic term for all Scandinavians of the Middle Ages . On the other hand, the word denotes the inhabitants of the Duchy of Normandy , whose original ethnic composition has not yet been fully clarified, and in particular their chief families of Scandinavian descent and their descendants in southern Italy, England and elsewhere. Over time, however, the second term has established itself as the usual one.

The German word Normanne comes from Latin sources in which the equivalents nortmanni , northmanni and nordmanni can be found. It has its origins in Scandinavian , where norðmaðr ( Pl. Norðmenn ) refers to people who live in or come from Nordic countries ( norðrlönd ) without the specific geographical assignment being available. Sometimes the word specifically refers to "Norwegian" as a synonym for noregsmaðr . Nordmannus ( Sg. To nordmanni ) is also synonymous with dacus " Dacian " is used.

The Normans in the narrower sense are descendants of the Vikings who were admitted to the Frankish Empire in 911 , who accepted Christianity and quickly acculturated. They named the area Normandy after their origin . The second identification of the Normans with the inhabitants of Scandinavia from the end of the 8th to the 11th century, which only exists in German, comes from the terminology of the Carolingian authors who called the Vikings who invaded in the 9th century "Nordmannen". In historical research as well as in French and English, however, a distinction is made between Normans and Vikings.

The sources are poor. While the 9th century is relatively well covered by the Annals of St. Bertin and the Annales Vedastini and the period after 919 by the work of Flodoard von Reims , there is little for the further decades of the 10th century. There is Dudo from Saint-Quentin's “De moribus et actis primorum Normanniæ ducum”, written between 1015 and 1026, a text with many errors and inaccuracies. So Dudo is the leader of the Normans in the 10th century as dukes, although this title was used until 1006, and he speaks anachronistic of Normandy as a territorial unit that currently blinds did not exist. In contrast, Flodoard describes the leader as "Princeps Normannorum". Flodoard has also described the processes. He is considered the more reliable chronicler. Another source is the history of the duces Normannorum des Guilelmus Gemeticensis (also Wilhelm von Jumièges , Wilhelmus Calculus). He lived in the 11th century. He drew from Dudo's works and from the traditions of the Jumièges monastery. 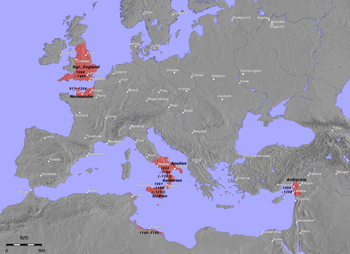 Norman territories in the 12th century

It is not certain which Scandinavians it was. At first you had to deal with predatory Vikings who plagued the northern French coasts. They came mainly from Denmark, but also from Norway. This Viking prehistory can be summarized as follows:

According to Snorri , a pirate named Hrolf ( Gange-Hrolf ) is said to have been on a raid in Norway after King Harald Fairhair had issued a ban on raids within his country. This led to Hrolf's banishment.

“Gang-Hrolf then drove to the West Sea to the Hebrides, from there to France. There he armied, conquered a powerful Jarl empire and settled many Normans there. Therefore this country is called "Normandy". The Jarle of Normandy come from Hrolf's family. Gang-Hrolf's son was Wilhelm, Richard's father. His son was Richard the Second, the father of Robert Longsword, his son Wilhelm the Bastard, the King of England. All English kings come from him. "

This representation is the well-known roller blind . However, whether Snorri was right with this equation is increasingly doubted, because the continental sources consider Rollo to be a Dane.

In 911 the Vikings suffered a major defeat in the Battle of Chartres . The predatory drive was already slacking off. The great losses of warriors could no longer be replenished because the pirate way of life in the home countries with the strengthening of the royal central power no longer found support - as Harald Fairhair's approach shows - and his own offspring also increasingly failed to materialize. So it happened that the Vikings gradually became tired of war and looked for settlement areas.

“We fought enough and defeated the Franks. Now we prefer to retire and enjoy the fruits of the land in peace. "

Charles III was the last Roman emperor from the Carolingian dynasty , who also ruled over the West Franconian Empire. He was followed by the powerful Count Odo of Paris , ruler of Neustria , the landscape between the Scheldt and Loire, who, with Paris and many rich abbeys, had a relatively stable power base in western France. After him came King Charles III. , the “simple-minded” (898–923). But the latter no longer had the power that the Carolingians had earlier, and only had a small area of ​​power north of Paris with Laon as its center . Power was split between the greats of the country, who claimed national defense for themselves. The most powerful competitor for power was Robert , Odo's younger brother. A compromise was reached between king and count, which made it possible to develop a common strategy against the raids of the Vikings. That ultimately led to a 911 victory in Chartres . A part of the Vikings withdrew, another part started negotiations under Rollo with King Karl and Count Robert of Paris, who has now become Odos' successor. The Treaty of Saint-Clair-sur-Epte came about . According to Dudo of St. Quentin , Rollo is said to have received the area from the Epte to the Atlantic. In any case, he reports that Berengar and Alain, princes of Brittany , took the oath of allegiance to Rollo . This does not coincide with the other sources. Flodoard , a contemporary of the events, writes that they had shade the city Rouen and some to belong districts given. It is assumed that it was initially the area of ​​the present-day departments of Seine-Maritime , Eure , Calvados , Manche and parts of Orne . Wilhelm Langschwert received further areas as fiefs from King Rudolf of Burgundy in 924, the Bessin , the Hiémois and Maine . In 933, Cotentin and Avranchin were added. However, these leanings are poorly documented in terms of sources, because Dudo and Flodoard only give imprecise information about these areas.

It is not clear from the sources what legal status Rollo had in the West Franconian Empire. Dudo names seven legal acts:

The interlocking of the hands, called “the walk” in feudal law, was to be understood by the readers of Dudo as a rite of leanings. But the engagement and the subsequent wedding raise questions. Because the king did not have a marriageable daughter named Gisla. He got married for the first time in 907. According to the Norman warriors, she should not have been a premarital daughter. Even the kiss on the feet should not be historical, because it was not part of the lean-back ritual, it was not at all custom at that time. Dudo calls Rollo “dux”, although this title has not yet been granted to the Dukes of Normandy in 911. The waiting period of one year is to be understood in the sense of the catechumenate : The preparation for baptism through instruction in Christian doctrine, prayers and the creed. Rollos legal status is exaggerated by Dudo: as dux of Normandy he had committed himself to royal service, but only as far as the other duces, e.g. B. Robert of Neustria. He was equal to the king. He was also a patricius with inheritance title over the whole of Normandy. He is also legally obliged to Robert von Neustrien , who was his godfather. How his legal status was actually defined in the Frankish Empire cannot be determined from Dudo's report.

Incursions in the Mediterranean

→ Main articles : Norman conquest of southern Italy  and the county of Sicily

In the southern Italian areas they ruled from around 1030. Individual groups of Normans extended their forays into the Mediterranean at the beginning of the 11th century and established themselves in the area around Naples , at Aversa and Capua . Eventually they gained control over almost all of southern Italy and Sicily , which they conquered from the Saracens .

Settlement in the British Isles

In 1066, the Norman Duke William conquered England after the Battle of Hastings . Edgar Ætheling , one of Wilhelm's competitors for the English throne, finally fled to Scotland. King Malcolm III married Margaret, Edgar's sister, in opposition to William, who had already questioned the southern borders of Scotland. In 1072 William raided Scotland and rode as far as Abernethy, where he met his fleet. Malcolm submitted to Wilhelm and paid homage to him, giving him his son Duncan as a hostage. Since then there have been repeated arguments about whether the Scottish crown owed obedience to the King of England.

Normans arrived in Scotland, built castles and founded noble families, the future kings such as Robert I. presented. They also formed some Scottish clans . Alexander I , the older brother of King David I , married Sybilla of Normandy. David I introduced Norman culture to the Scots and spent time at the court of King Henry I , who himself married Edith of Scotland , David's sister. In order to remove the kingdom from the rule of his half-brother, Máel Coluim mac Alaxandair, David had to give land to many people. The process continued under the successors of David, most notably under William I. The Normans' feudal system was established to varying degrees in large parts of Scotland. Scottish families like the Bruce , Ramsay, Fraser, Ogilvie, Montgomery, Sinclair, Pollock, Douglas or Gordon and also the later House of Stuart can all be traced back to Norman roots.

The 11th century saw important developments in the history of classical music in Normandy. The Fécamp and Saint-Évroult abbeys were centers of music production and education. At Fécamp , a system of notation through letters was developed and taught under the Italian abbots Wilhelm von Dijon and Johannes von Fécamp . Under the German abbot Isembard, La Trinité-du-Mont became a center of musical composition.

Norman architecture established itself in the areas they conquered. In England and Italy they spread a unique style with their typical northern French castles. In Italy, the Normans incorporated elements from Islamic, Lombard and Byzantine architecture.