The title of this article is ambiguous. Further meanings are listed under Le Mans (disambiguation) .

Le Mans  [ ləˈmɑ̃ ] (inhabitants: Manceller ) is a city with 142,946 inhabitants (as of January 1, 2017) in north-western France . It lies at the confluence of the Sarthe and Huisne and is capital of the department Sarthe in the region Pays de la Loire .

The city with the Gothic cathedral Saint-Julien du Mans is best known for the 24-hour race of Le Mans (24 Heures du Mans).

History of the creation of le Mans

The founding of the city of Le Mans is due to an oppidum of the Celtic Cenomani . The settlement was founded in 56 BC. Conquered by the Romans, who called them Suindinum . In the 3rd century one was ramparts built, which is still visible in part. The diocese of Le Mans was established in late Roman times ( Saint Julian is the first bishop ), which later became subordinate to the Archdiocese of Tours . Initially belonging to the rule of Syagrius , Le Mans was conquered by the Franks in 486 . Le Mans later became the center of the county of Maine , which was fought over and over again , especially in the 11th and early 12th centuries, between the Dukes of Normandy and the Counts of Anjou . In 1110, Anjou was finally able to secure sovereignty over the country, which became part of the Angevin Empire with the rise of the Plantagenets to kings of England in 1154 . Johann Ohneland lost his land ownership north of the Loire again to the French crown, which in 1204 brought Le Mans back under their rule. In the course of the Hundred Years War , Maine was again fought over between the English and the French, which also had to do with the population of Le Mans, who had to withdraw behind their city walls and give up the suburbs that had meanwhile been built. In 1443 the English were finally expelled from Maine. After a dynasty of counts reigned here in the meantime, Maine was added to the crown property in 1480. After the Reformation, Maine was one of the Huguenot provinces, so there were again bloody clashes here; It was not until 1589 that Henry IV was able to ensure peace here too, which was to prove to be quite permanent.

In the age of absolutism , local handicrafts experienced a boom, especially the manufacture of textiles and wax. In 1740, two thirds of the city's textile production was exported. The improvement of the traffic routes also promoted the economic upswing at the time of industrialization: In 1844, Le Mans received a railway connection on the Paris-Rennes line . The activities of the Bollée family, who first produced steam engines here in the 1840s, and then mainly automobiles from 1887 on, were also of great importance to the city. From January 10 to 12, 1871, the battle of Le Mans between the French Loire Army and the second army of Crown Prince Friedrich during the Franco-Prussian War took place here. This ended with a German victory. In 1893 Le Mans was also connected to the telephone network. The tradition as an automobile racing city was established by a first Grand Prix in 1911. In 1936 the Renault company settled in Le Mans, which is still the city's largest employer, but large insurance companies also chose Le Mans as their location. Between 1940 and 1944, Le Mans was occupied by the Germans, and the destruction caused by the war was limited here. The higher education system, which had been neglected for a long time, received increased funding with the establishment of a university in 1960, although this first university was initially dependent on the University of Caen. The technical college founded in 1969 became more important.

The École Nationale Supérieure d'Ingénieurs du Mans was founded in 1995.

Mayor of the city has been Stéphane Le Foll ( PS ) since June 14, 2018 . The city is divided into nine constituencies .

The city of Le Mans has had close relationships with Paderborn in North Rhine-Westphalia since 836 because of their common patron, Saint Liborius . The official city ​​partnership has only existed since 1967.

Le Mans has a total of six twin cities:

In addition to the agricultural machinery industry, represented by the Claas company , which manufactures tractors in Le Mans, the most important branches of the economy are primarily the metalworking and electrical industries, as well as the service sector (insurance companies such as MMA, Mutuelles du Mans Assurances ). 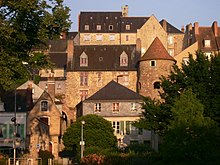 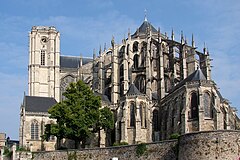 Organ in the cathedral 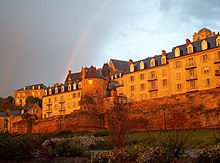 Since the city remained largely undestroyed during World War II, the historic old town has also been preserved. Most important are the Gallo-Roman city walls , which were built towards the end of the 3rd century and are remarkably well preserved, as well as the Saint-Julien Cathedral in Romanesque-Gothic style, the Eglise de la Couture church from the 13th and 14th centuries , the Musée de Tessé, the Maison d'Adam et Ève, the Hôtel de Clairaulnay and the Hôtel de Vaux.

But motorsport fans will also get their money's worth: the Le Mans 24-hour race will be held in the immediate vicinity. The Automobile Museum of the Département Sarthe has been located inside the race track since 1991. The more than 100 vehicles on display also include winning vehicles from the 24-hour race, including a Bentley (winner 1924 ) and a Ferrari (winner 1949 ). Successful vehicle pilots have left their hand or footprints in the pedestrian zone of Le Mans: They are attached to brass plates in the pavement or on a fountain.

World famous Le Mans was its motor sports events, in particular by the 24-hour race at Le Mans with the world's most serious accident in 1955. The model for many long distance races is since 1923 every year in mid-June, the 13.5 km route Circuit des 24 Heures on Country roads in the south of Le Mans. As early as 1906, the world's first Grand Prix race took place in Le Mans with the participation of 32 automobiles.

There is also the 24-hour race for motorcycles and various other motorsport events, including the French Grand Prix of the Motorcycle World Championship , which take place on the shorter version of the racetrack, the Bugatti circuit .

The football club Le Mans Union Club (MUC) 72 had played in the second division of France for a number of years until it was dissolved in October 2013 due to bankruptcy.

The basketball team Le Mans Sarthe Basket was four times champion, most recently in of 2006.

The club MSH 72 ( Le Mans Sarthe Handball 72 ) is the main club of the city and the Sarthe for the men.

The club CSC Le Mans handball or Club Sportif des Cheminots du Mans, "Sports club of the railway workers in Le Mans", founded in 1957, currently has 13 active teams, both in the youth and senior classes.

There is a 342 meter high transmission mast for VHF and television near Le Mans near Mayet . It is one of the tallest structures in France and even towers over the Eiffel Tower .

People who worked at Le Mans

Municipalities in the Arrondissement of Le Mans