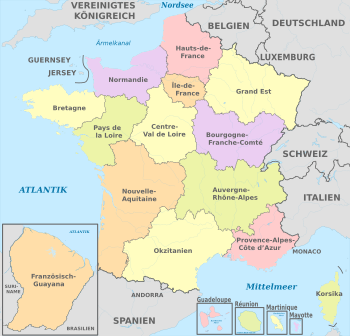 There have been 18 regions since the beginning of 2016, 13 of which are in Europe and five are French overseas territories ( France d'outre-mer ) - French Guiana , Guadeloupe , Martinique , Mayotte and Réunion . The regions in Europe (except Corsica ) each consist of several departments , the overseas regions each contain only one overseas department . Corsica is a local authority with special status ( collectivité à statut particulier ) .

The size of the regions can be compared with the German states . However, they are not member states with their own constitution or legislative competence . Their delimitation, responsibilities and budget are determined by the central government .

By the end of 2015, there were 22 regions in the European part of France instead of the current 13 (see below ). The first elections to the regional councils of the newly formed regions took place on December 6th and 13th, 2015.

The regions were initially set up in 1972 by a simple law (loi nº 72-619) as part of the decentralization of the French unified state . Since 1982 they have had the status of local authorities. It was not until 2003 that its existence was enshrined in Article 72 of the constitution (alongside departments, municipalities and other regional authorities). The specific design - number, delimitation, names, responsibilities, organs, budget funds of the regions - is still up to the ordinary legislator. In 2015, the legislative bodies of the French Republic (National Assembly, Senate and President) were able to reorganize the regions without the need for the consent of the regions concerned themselves.

The different levels of the local authorities are not in a hierarchical vertical relationship, i. H. the departments and municipalities are not subject to the supervision or direction of the regions. Instead, all regional authorities are directly subordinate to the republic and each have their own competencies. In practice, however, the areas of responsibility of the various levels partially overlap. At best there is coordination and networking, but sometimes there are also disputes over competence. 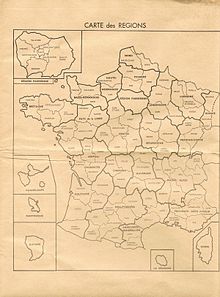 Regionalization project on a map from 1969

The 34 historical provinces of the Kingdom of France were dissolved as a result of the French Revolution . From 1790 the départements - initially 83 - were the highest administrative unit below the central state. Several departments were combined into larger regions for the first time in 1919 through a decree by the Minister of Commerce and Industry, Étienne Clémentel , by which the chambers of commerce of several departments were combined into one regional chamber of commerce. During the Vichy regime in 1941, the départements were merged into 18 regions (which largely coincided with the later program regions) and placed under regional prefects. Reference was made symbolically to the historical, pre-revolutionary provinces. These regions were dissolved again immediately after the liberation of France .

The administrative and local authority level of the later French regions, each consisting of several departments, was created in 1956 as program regions (régions de programme) to coordinate state regional planning . From 1960, the regions were called Circonscriptions d'action régionale . In 1964, commissions for regional economic development, Commissions de Développement Économique Régional, were created for the regions . The affiliation of the departments to the respective regions has since been subjected to several reforms.

In 1969, in a referendum , the majority of French voters rejected the project to reform the regions (and the Senate) presented to them by President Charles de Gaulle . The project envisaged the institutionalization of the regions as local authorities, which was initially not implemented. The defeat led (in addition to his health) to de Gaulle's resignation as president. In 1970 the Provence-Alpes-Côte d'Azur-Corse region was separated into the independent regions Provence-Alpes-Côte d'Azur and Corsica .

With the law of July 5, 1972, the regions received the status of établissements publics under the direction of a regional prefect (préfet de région) . The Commissions de Développement Économique Régional were renamed regional councils (conseils régionaux) with effect from 1973 . The overseas departments also received the status of regions in 1972. In 1976, the area around the French capital Paris, which until then was called Région Parisienne , was given the same name as Île-de-France with the other regions.

The decentralization laws of March 2, 1982 gave the regions the status of local authorities (collectivités territoriales), which until then had only been enjoyed by the municipalities and the départements . Corsica became a region with special status in 1982 and from that year had a directly elected regional assembly. In the overseas regions, the first regional elections took place as early as 1983. In 1986, the regional councils were also elected directly in the regions with normal status for the first time. Since then, the powers of the regions over those of the central government have been gradually expanded. In 1991, Corsica became a territorial body with special status, modeled on French Polynesia .

The 2003 constitutional reform enshrined the existence of the regions as local authorities in the constitution. In 2011 Mayotte was added as an overseas region (DOM-ROM) after a referendum in 2009. A major reorganization was carried out from 2014, which affected almost all regions of metropolitan France and came into force at the beginning of 2016.

The regional council elects a president (président du conseil régional) and several vice-presidents for different areas of responsibility, who lead the self-government of the region.

In the overseas regions of Guadeloupe and La Réunion, a regional council and a département council exist side by side for the same geographic area, each exercising the powers assigned to the regions or the départements.

As a regional authority with special status, Corsica does not have the organs of a region, but an assembly (Assemblée de Corse), which is still elected according to pure proportional representation, and an executive council (conseil exécutif) responsible for these . These have the competencies of a region as well as that of a department.

Most of the regions also serve as statistical regions at NUTS-2 level . There are nine Zones d'études et d'aménagement du territoire at the superordinate level NUTS-1 .

Classification of the regions since 2016

Redesign of the regions of France

The 14 regions proposed by François Hollande on June 2nd, 2014

The division into 13 regions adopted by Parliament on December 17, 2014

On June 2, 2014, President François Hollande proposed a redesign of the French regions. The number of regions should therefore be reduced from 22 to 14 by uniting existing regions. The relevant regulations were made in Law No. 2015–29 (Loi relative à la délimitation des régions, aux élections régionales et départementales et modifiant le calendrier électoral) of January 16, 2015, published on January 17, 2015. The aim of the new division is an increase in administrative efficiency to counteract the indebtedness of France.

Hollande warned that this was an important project for France's future that should not be delayed. There have been numerous discussions and expressions of opinion about which regions should be merged. For example, Ségolène Royal called for a merger of the Pays de la Loire regions with Poitou-Charentes ; Jean-Marc Ayrault, however, for a union of his home region with Brittany . In Normandy there was a dispute about which should be the capital of a united Normandy - one of the previous ones, Rouen or Caen , or now Le Havre . The merger of Midi-Pyrénées and Languedoc-Roussillon as well as Picardy and Champagne-Ardenne was viewed critically.

On July 9, 2014, a modified proposal was presented that provided for 13 regions. The main changes compared to the preliminary draft were as follows: Limousin and Poitou-Charentes were merged with Aquitaine , Picardy with Nord-Pas-de-Calais and Champagne-Ardenne with Lorraine and Alsace . This proposal also met with criticism. The non-transparent and perceived chaotic preparation led to resentment; so there were major protests against the merger in Alsace. In the French parliament, the majority of MPs from the Front de gauche , the Greens , the Parti radical de gauche , the UMP and the UDI voted against, while the socialists voted for it . In particular, the UMP MPs from Alsace agitated vehemently against the plan until the end. The bill was approved in the first reading on July 23, 2014 in the National Assembly and on October 21, 2014 in the Senate . The final approval by the French parliament took place on December 17, 2014.

The previous 22 regions of France (without counting the five overseas regions) were combined into 13 regions on January 1, 2016. The Alsatians in particular protested against the territorial reform.

As a rule, the regions were assigned the connection of the previous region names in alphabetical order as a provisional name (exception: Normandy), the final region name was set by a decree of the Council of State by October 1, 2016 . Strasbourg was set as the seat of the merged region in northeastern France at an early stage, and on July 31, 2015, the French government provisionally set the seat of the regional prefecture for the other new regions as well. Six regions were excluded from the reorganization.

See also : NUTS: FR  and Flags and coats of arms of the regions of France