The title of this article is ambiguous. Further meanings are listed under Le Havre (disambiguation) .

Le Havre [ ləɑːvʀ ] is a city in northwestern France on the English Channel in the Seine-Maritime department in the region of Normandy .

The inhabitants are called Havrais in French . Le Havre, on the right bank of the Seine estuary , is the location of the second largest port in France after Marseille (→ Port of Le Havre ). In terms of population, Le Havre is the largest city in Normandy , in terms of area the second after Rouen .

After the heavy destruction in World War II, the city ​​was rebuilt from 1945 to 1954 according to plans by the architect Auguste Perret with a team of 60 architects. The city center with its characteristic colored concrete architecture is one of two (besides Brasília ) city ensembles of the 20th century on the UNESCO World Heritage List (July 2005).

Le Havre is a relatively young city in two respects: as it was only built as a naval port in 1517 at the suggestion of Admiral Bonnivet - King Francis I's official founding document for the provisional Franciscopolis dates from October 8, 1518. After the Second World War the totally destroyed city was rebuilt according to a new urban planning concept. The former Le Hable de Grâce (mentioned as early as 1489) was later simply called Le Havre ("the port"). In the Middle Ages there were only small fishing and farming villages here, while the main port of the region was in Harfleur . The new port of Le Havre was supposed to cope with the growing overseas trade and, through its fortification, also serve to secure the Seine estuary militarily.

However, the conditions in the settlement surrounded by swamps were anything but ideal, especially since the young town was the victim of a severe storm surge in 1525 that killed around one hundred of the 600 residents at the time. Nevertheless, the city soon flourished, not least due to the shipyard built in 1524. The city also gained importance as the home port of a fishing fleet, and it was the starting point for several research and discovery trips. The construction of today's Notre Dame Cathedral began in 1536, and from 1541 the city was given the face of an early modern planned city ​​according to the plans of the Italian Girolama Bellarmato with a rectangular floor plan and modern bastions . The Huguenots found many followers in the city after 1560, which wanted to undo a predominant Catholic power with military force ; However, the Protestants Le Havres also received support from England, which sent 6,000 men under the command of the Count of Warwick, who had Fort Warwick built here without being able to hold out for long.

After the expulsion of the English, King Charles IX. grind the fort. Cardinal Richelieu then had four new bastions built in the 17th century, and Le Havre also received an arsenal. In 1650, Fronde leaders were imprisoned in the city's new citadel . The French West India Company (founded in 1664) soon set up its headquarters in Le Havre, which benefited not least from the slave trade . Even the bombardment by the English Navy in 1694 could hardly disrupt this upswing, even if 300 houses were destroyed in the process. The visit of Madame de Pompadour then cost the city enormous sums again in 1749. In 1759 there was another attack by the English during the Seven Years' War . Nonetheless, the city grew, and soon there was also a tobacco factory. Louis XVI approved an expansion of the city in 1786, which quadrupled its area, the population was around 20,000 in 1789, and the city's theater was built during this time. The independence of the United States of America (declared on July 4, 1776) promoted trade, so that Le Havre rose to the second largest port in France (after Nantes ).

The continental blockade (announced November 1806 until around 1813) then brought about a crisis that only ended with the Restoration in 1815. The hygienic conditions did not keep pace with the resumption of growth, especially since the beginning of industrialization favored the emergence of larger poor areas in which cholera and typhus epidemics were the order of the day. The rich bourgeoisie, on the other hand, could afford to build representative city ​​palaces . In the first half of the 19th century, Le Havre also became the seat of a stock exchange.

The establishment of a gas supply (1836) and a sewerage system (1844) improved the situation for large parts of the population. In 1841 Le Havre was already the home port of 32 steamships, and in 1847 the city was connected to the railway . At the beginning of the 20th century, Le Havre was Europe's largest coffee import port, and cotton was also being delivered in ever larger quantities from the New World, while at the same time increased emigration to the USA was observed.

Despite the industrialization, Le Havre was increasingly used as a health resort and relaxation area, to which the generous layout of boulevards during the Belle Époque contributed in particular . At the same time the political agitation of the working class increased, which showed itself in strikes and in the rise of the socialist parties.

In the First World War, 6,000 inhabitants of the city died. Le Havre was far enough from the front and therefore suffered no damage. It was important for the warfare, especially as a supply port for the allied British troops on the Western Front, with German submarines sinking several ships here. Massive strikes broke out in 1922 , and the economic situation worsened due to the post-1929 crisis; Another major strike followed in 1936. The construction of oil refineries could do little to change the misery.

During the Second World War , after the defeat of France in 1940, German troops entered Le Havre. A German garrison of 40,000 men was created, and the port was expanded into a fortress as part of the Atlantic Wall . The Jewish population in particular, including the mayor, was exposed to repression, terror and persecution under Nazi rule. The Resistance was reinforced after the Allied landings on June 6, 1944 in Normandy . Only after the Allied Operation Astonia could Le Havre be retaken on September 12, 1944. The city had been subjected to a total of 132 bombings, the most massive of which was flown by the RAF Bomber Command on September 5 and 6, 1944; he killed 5,000 people and destroyed 12,500 buildings.

After the war, Le Havre was rebuilt in the language of modern concrete architecture according to the plans of the architects Auguste Perret . The town hall and the church of St. Joseph were built according to his plans. From 1972 to 1978 a cultural center was built by Oscar Niemeyer , the Maison de la Culture du Havre , which is also called le volcan because of its shape of a cut volcanic cone .

Since 1974 the city has been the seat of the Roman Catholic diocese of Le Havre , whose area had previously been part of the Archdiocese of Rouen . The main church of the diocese is the former parish church and now the Notre-Dame Cathedral .

As a result of the change in industry, particularly the oil crisis of the 1970s, the city has experienced some economic difficulties, so that the population has declined by 12 percent since 1975.

It was included in the UNESCO World Heritage List in July 2005 - as the only urban ensemble of the 20th century in Europe to date. With Brasília there is only a second example of outstanding urban architecture of this time worldwide . 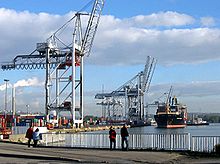 The container terminal in the port of Le Havre

Le Havre is a petrochemical center with numerous refineries and is heavily dependent on its seaport, which is one of the largest in France. The Delmas shipping company has its headquarters in the city . In addition, shipbuilding is important, as is the food industry . At the gates of the city in Sandouville is one of the largest plants of the automobile manufacturer Renault as well as the corresponding supply industry. The Laguna , Vel Satis and Espace models were manufactured here (as of 2006).

In summer 2008, “Les Bains des Docks”, a water park designed by Jean Nouvel , was opened in the abandoned port area of ​​the Vauban docks . A shopping center is being built right next to it and not far from it is a new residential area, the “Quartier Saint-Nicolas de l'Eure”.

The city has official partnerships with:

There is a port partnership with Osaka in Japan .

Municipalities in the Arrondissement of Le Havre