The title of this article is ambiguous. Further meanings are listed under Impressionism (disambiguation) . 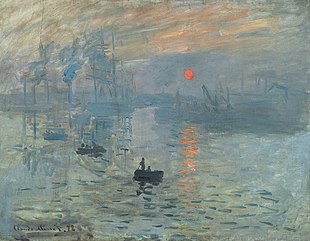 Impressionism (from the Latin impressio 'impression'; via the French impressionnisme ) is a style in art history that is characterized by the atmospheric depiction of fleeting snapshots of a scene. It emerged from a movement within painting in France in the second half of the 19th century. The term Impressionism was also carried over to certain styles in music , literature , film and photography .

The word Impressionism, derived from the Latin impressio 'impression' or French impressionnisme , established itself as an art history term in 1874. As early as the early 1860s, Téophile Gautier described Daubigny's painting style, which he found too fleeting, as an "impression". Eventually, the term was picked up by some reviewers to describe the works of the young artists in the exhibition on 35 Boulevard des Capucines , which opened on April 15, 1874. The progressive-radical journalist and art critic Jules-Antoine Castagnary , who had already defended the role of his friend Gustave Courbet in the Paris Commune , discussed in his essay the question of what his group of artists should be called. With reference to Monet's painting Impression - soleil levant (Impressions - Sunrise), he commented: “If you wanted to characterize them with an explanatory word, you would have to create the new term Impressionists . They are impressionists in the sense that they do not depict a landscape, but the impression it creates. "

In art historical literature, the art critic Louis Leroy is often cited as the creator of the term Impressionism. He published an article in the satirical magazine Le Charivari on April 25, 1874 and derived the derogatory term from Monet's painting. However, as Ian Dunlop notes, the term Impressionism was already in use in the 1860s and 1870s, and was used in connection with other landscape painters before Monet. As a result, numerous artists used this term, which was then officially used in the preparations for the third Impressionist exhibition in 1877.

German Impressionism in particular was interpreted by some social and art historians as a phenomenon of decadence , such as Karl Lamprecht and Eckart von Sydow at first . According to Lamprecht, it can be understood as an aesthetic reaction to naturalism , against whose "truth-seeking activism" and all too bold statements an aversion developed by the bourgeoisie, seeking pleasure and relaxation, which no longer had the "enthusiasm of the early days ", but in the business of had his general manager represented and instead sought cozy comfort and diversion. This was accompanied by the rediscovery of the differentiated culinary cultures of Hellenism and Rococo as well as the Burgundian-Flemish culture, which embodied the "longing for a more beautiful life".

The painting Impression - soleil levant (1872) by Claude Monet gave the movement its name. However, it emerged much earlier. Édouard Manet's works from the 1860s already show fundamental elements of the beginning break with academic doctrine - for example music in the Tuileries . The Impressionists' first group exhibition took place in 1874 in the studio of the Parisian photographer Nadar .

The representation of light and the atmospheric conditions became the main painterly task in Impressionism. Color was seen as a result of light and atmosphere and represented as a carrier of light. The partial abandonment of black and earthy tones brightened the color palette.

The artists broke away from the pictorial function. The immediacy of the snapshot and the randomness of the image detail are characteristic features of Impressionist works of art. New insights into optics resulted from Chevreul's color theory . The industrial production of oil paints in lockable lead tubes (instead of pig bladders), patented in 1841 by John Goffe Rand , made open-air painting possible. This new painting practice, which was related to a new worldview and view of life, spread across Europe around 1900. From there it also reached the American continent and as far as Australia.

The German Impressionism , however, provides a special way. It develops from the naturalism by "a gradual refinement of the same stylistic means, namely by the side of the sensationalist way, whereby all non-material factors are obsolete [...]" and you instead to limited the visual impression. So'll Max Liebermann placed by the "loosening of his painting technique and a preference for light trickled canopies slowly to the Impressionists [...], without abandoning its naturalistic achievements." The same effects in unimpresionistischen topics often. Unlike in France, “mixed products” are created that lack charisma.

While many naturalists such as Heinrich Hart rejected music as a means of expression of a “truth-seeking actionism”, the impressionists considered the “objective dreaming away” to finely graduated colored chords often a pleasure. In the music before and around the turn of the 20th century , one speaks of the style of impressionism , to which Wagner's opera Tristan und Isolde referred.

Claude Debussy (1862–1918), who resisted being called an Impressionist, is considered to be the founder . For him, music is “sound and color art”. In this way, impressionistic soundscapes are created in his works, in which the atmosphere and mood are represented musically.

Debussy's melodic motifs rarely develop and are not processed or carried out counterpoint , as was usually the case. Rather, they appear for a brief moment, show themselves in rapidly changing harmonics and are immediately replaced again. He was inspired by the perception of nature, but also by Asian music, which he got to know at the world exhibition in Paris in 1889 .

An important contemporary of Debussy was Maurice Ravel (1875–1937), whose impressionistic study of instrumentation for a large orchestra, Boléro , is particularly popular. English Impressionism was shaped by artists such as Cyril Scott (1879–1970) and John Ireland (1879–1962).

The term Impressionism is used in German literary studies as a literary-historical classification term, but without a consistent scientific consensus, as it is often perceived as too "imprecise". Impressionist literature is partly attributed to symbolism and vice versa.

At the end of the 19th century a number of photographers fought for a claim to art by staging the art of their time with their means. The Pictorialists set, inspired by thinkers such as Antoine Claudet and Peter Henry Emerson , systematically blur as a stylistic device. With his rubber bichromatic prints, Robert Demachy staged ballet recordings that were very similar in style and mood to paintings by Edgar Degas . In addition to Demachy's pictures, works by the Pictorialists Heinrich Kühn , Alfred Stieglitz , Gertrude Käsebier , Edward Steichen , Adolphe de Meyer , Mary Devens and Alvin Langdon Coburn have an impressionistic appearance.

Conversely, photography had a fruitful effect on Impressionist painting. Random-looking compositions with cut people, wagons and animals made their entrance. Demachy had modeled the ballet scenes by Degas. For his part, Degas used the snapshot effect, the deliberate randomness of image detail and composition, as a stylistic device in his paintings. Gustave Caillebotte , who showed his paintings for the first time at an Impressionist exhibition in 1876, accused his critics of depicting reality “photographically”, that is, too realistically. He anticipated techniques and topics that only established themselves in photography in the 1920s as “ New Seeing ”. Photographers like André Kertész , Wols and László Moholy-Nagy are particularly close to Caillebotte's work. Some of your pictures take up the same motifs or show a section from the same perspective. There are, for example, shots of streets and squares in a steep top view, as can already be found in Caillebotte's paintings.

In general, one speaks today of impressionistic photography when certain techniques are used to achieve optical effects and moods, such as the conscious movement of the camera during a long exposure, e.g. B. when tracking a moving object. Also through a wide-open aperture through which only one level of the image is sharply drawn and z. B. branches in the foreground or the entire background appear blurred, or by choosing specific filters, impressionistic effects can be achieved.

Impressionist film is an aesthetic concept in cinematographic art that is primarily associated with French films of the 1920s. Directors such as Germaine Dulac , Louis Delluc , Jean Epstein , Abel Gance , Marcel L'Herbier and Dimitri Kirsanoff referred in these works to the impressionist painting of the 19th century and to the music of impressionism. The term was established by film historians such as Henri Langlois and Georges Sadoul .