In the broader sense, the founding period is a phase of economic history in the German Empire and Austria-Hungary in the 19th century, which began with broad industrialization and lasted until the “ Gründerkrach ” (big stock market crash of 1873). In a narrower sense be here as early years called the first two years after the founding of the German Empire (1871-1873), as Germany not least by the French reparations high economic underwent phase. The start-up crisis that followed the stock market crashmeant a phase of economic stagnation lasting around twenty years . However, the word “ founder ” had a rather negative sound at this time, because not a few of the numerous newly founded stock corporations were purely speculative and quickly went bankrupt during the crisis . At the time, the expression Gründerzeit only referred to the phase of economic upswing.

In contrast to this, the term `` Gründerzeit '' in cultural-historical and, above all, architectural-historical understanding (where it is usually used as a synonym for historicism ) is mostly used for the entire phase after 1870 and often until 1914, so that the long period of economic crisis is ignored. 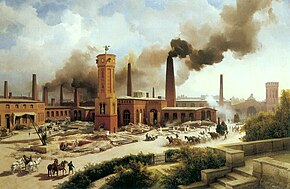 The founding period falls in the epoch in which the middle class in Central Europe took over the cultural leadership. It is therefore also considered to be the heyday of classical liberalism , even if its political demands were only partially implemented and more towards the end of this period. In relation to German history, the historian Christian Jansen describes the period between the revolution of 1848/49 and the founding of the empire in 1866/1871 as the founding period. The economist Nikolai Dmitrijewitsch Kondratjew describes the economic upswing of this period in Central Europe as the ascending phase of the second Kondratiev cycle .

The industrialization set new tasks and aesthetically, especially in architecture and handicrafts. At the same time, people reacted to the rapid and major changes in everyday life by turning to tradition and history. This expressed itself in an eclectic development of existing forms. Therefore, the “Wilhelminian style” means historicism . However, since historicism remained the predominant style until after 1900, the use of the term is very different, especially in colloquial usage. In the context of the history of style, it is used to denote very different periods of time, for example 1850–1873, 1871–1890, sometimes even 1850–1914. 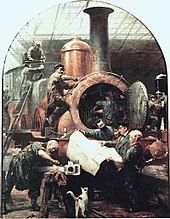 Locomotive construction by Paul Friedrich Meyerheim (from the cycle life story of a locomotive , 1873–1876)

The term "early days" refers to the comprehensive economic boom of the mid-19th century, in the company's founders could become rich in a short time. Railway construction was a decisive factor in the rapid economic development . Typical "founders" are therefore railroad entrepreneurs like Bethel Henry Strousberg . The railroad had a significant impetus for other branches of industry, for example through the increased demand for coal and steel , so that industrial empires, such as that of Friedrich Krupp , emerged in these areas too . Above all, however, communication and migration have been made much easier. Rural lower classes migrated en masse to the cities (→ urbanization ), where they became part of the emerging proletariat - at that time the social question (also called pauperism at the time) arose , to which new political currents such as socialism , communism and Marxism reacted.

The railroad revolutionized not only transport, but also sales and distribution : mass production became possible outside of the conventional industrial sector . The beer brewer Ignaz Mautner and the coffee roaster Julius Meinl I , for example, became important company founders of food companies .

An important role among the "founders" also played people of Jewish faith who knew how to use the emancipation of the Jews and the associated opportunities for social advancement - one example is the Rothschild banking house , which was of considerable importance as a financier of railway construction.

In the Peace of Frankfurt , after being defeated in the Franco-Prussian War (1870/1871), France undertook to pay reparations of five billion francs in gold. In Germany this gold was melted down and minted into its own coins (the gold-backed currency mark ). At the same time, Germany sold its silver holdings and bought more gold on the world market . In order to counteract a devaluation of silver currencies due to the high amount of silver on the market, France limited the minting of silver coins (see Latin Coin Union ). The currency of many countries was based on gold ( gold standard ), silver ( silver standard ) or a bimetal standard .

The upswing came to an abrupt end in 1873 in the great Vienna stock market crash , the so-called founder crash , and passed into the roughly twenty-year economic stagnation phase known as the founder crisis .

In this subsequent crisis the theory of economic liberalism lost ground and control mechanisms were created and protective tariffs were introduced in practice . The petty-bourgeois and proletarian mass movements that arose during this period of crisis were declared opponents of economic liberalism.

The most devastating consequence of the big row was psychological. The promise of wealth and advancement for everyone seemed to have failed for the time being, in circles of small craftsmen and business people the fear of social decline through industrial competition was now in the foreground, and a lot of saved capital had also been lost as a result of the crash. In these petty-bourgeois circles, all kinds of conspiracy theories quickly spread - anti-Semitism in particular gained massive ground and became a broad political trend in the 1880s. 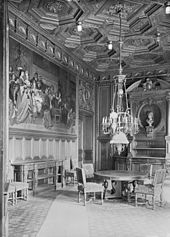 Dining room of the Kaskel-Oppenheim Palace in Dresden, 1848

The late historicism up to the period around 1900 is often referred to as the Wilhelminian style - in contradiction to the temporal delimitation of the economic- historical term “ Gründerzeit ”.

“The“ Wilhelminian style ”that emerged in the bourgeoisie survived the phase of economic stagnation after 1873 [...] It found its way into bourgeois living culture as an old German style, neo-renaissance or neo- baroque style and asserted itself into the twentieth century alongside the art nouveau that emerged around the turn of the century."

The term historicism , which is preferred in the field of art history, encompasses the development of styles from late classicism to neo-Romanesque , neo-Gothic and neo-renaissance up to the neo-baroque that emerged in the 1880s, under certain aspects also the neoclassicism of the early 20th century.

In the course of industrialization, the need for living space grew; entire city districts were rebuilt "on the green field ". Typical of the so-called Wilhelminian style architecture is a three- to six-storey perimeter block development with more or less richly decorated facades. In addition to apartment buildings for the rapidly growing urban population (see also demography of Germany ), quarters with villas and palaces for the rich ( upper ) middle class were also built . Elaborate interior design and valuable furniture in historicist styles were also found in these buildings . In addition, there were representative buildings for social life (e.g. theater), public administration (e.g. town halls) and the new infrastructure systems (e.g. train stations).

The emergence of new construction techniques was also significant in the last quarter of the 19th century , but the new materials initially did not lead to a departure from the old styles. The further development of steel production ( Bessemer process ) promoted the use of this material in construction. Buildings that tested new constructive qualities and aesthetic possibilities caused a sensation, such as the Crystal Palace, which was made entirely of steel and glass, at the London World's Fair of 1851 or the Eiffel Tower (or other striking steel lattice towers ) built for the Paris World's Fair of 1889 . But more and more individual construction elements or components made of steel were also used for everyday construction tasks. Towards the end of the 19th century, more sophisticated reinforced concrete structures were increasingly used in general building construction.

In Germany, many of the so-called Wilhelminian style quarters fell victim to the air raids of World War II . Even the modernist urban planning after the Charter of Athens since the 1950s has many of the buildings in central Europe eliminated. Nevertheless, there are still numerous residential buildings from this era in many Central European cities, which often encompass entire streets or even city districts. In many cases, and especially in Berlin, the cautious urban renewal that has been implemented since the 1980s has saved the districts from inner-city renovation . Today they are among the most popular urban properties in many places and have a high market value. The phenomenon of gentrification can be found in Germany mainly in districts with predominantly or exclusively Wilhelminian-style buildings.

Although the Art Nouveau buildings from around 1900 are sometimes mistakenly assigned to Wilhelminian style architecture , they must be distinguished from historicist buildings. 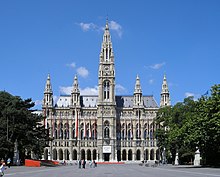 In Austria , too , the founding period began after 1840 with the beginning of industrialization in the Vienna area and in Bohemia and Moravia . Usually the March Revolution (1848) is taken as the starting point, the economic reforms of which, unlike the political reforms in general, were not withdrawn.

The liberalism reached in the Austria-Hungarian Empire in a short period of 1867 ( Austro-Hungarian balance its peak) until the early 1870s.

Vienna , the capital and residence of Emperor Franz Joseph I , became the fifth largest metropolis in the world from 1850 - after the failed March Revolution - through the incorporation of the suburbs and the influx of hundreds of thousands, especially from Bohemia and Moravia , until 1910 . The Ringstrasse was built in place of the old city wall, and residential construction and speculation flourished. The bourgeoisie , who had become wealthy and - compared to the aristocracy, which is more dependent on agriculture and the poor working class - became wealthy due to the increased importance of trade and handicrafts , set themselves monuments with magnificent buildings of historicism.

On a smaller scale, entire districts were rebuilt in other cities of the Danube Monarchy. One example is Graz (among other things through the work of Jakob and Josef Bullmann) - the old town of Graz was largely preserved, unlike the old town of Vienna , as the brisk building activity took place mainly outside of it.

Economically, the Danube Monarchy was one of the losers in the establishment of the German Empire, which made their request to join the German Customs Union futile. The Vienna stock market crash of 1873 caused the global economy to slow down, even if the term Great Depression for the subsequent deflationary phase is seen as an exaggeration today. Parts of the Wilhelminian style were destroyed in the Second World War; further buildings from this period disappeared due to demolition in the 1960s. As a result of the removal of the stucco , numerous Wilhelminian-style buildings lost their design features.

A parallel phenomenon is the US American Gilded Age ("Gilded Age"), which describes the economic boom after the end of the Civil War , in which the industrialization of the USA was decisively advanced. This expression, too, was originally intended to be pejorative and is now used as a vague term for an era.