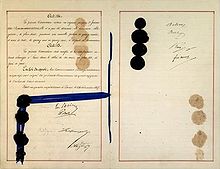 The Latin Monetary Union (officially Union monétaire latine ) was a currency union between France , Belgium , Italy and Switzerland , which existed from December 23, 1865 in fact until 1914 and formally until December 31, 1926.

Spain , Greece , Romania , Austria-Hungary , Bulgaria , Serbia , Montenegro (all monarchies) and Venezuela also joined the Union's regulations. A bimetallic silver-gold standard thus prevailed in much of Europe . It is considered to be the only outward result of Panlatinism .

Some other countries influenced their coins under the provisions of the Monetary Union, but were not with her.

History and main features of the coin union 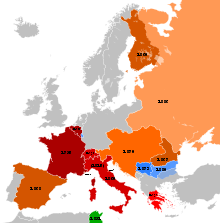 In 1795, France introduced the franc at 100 centimes as the second decimal currency after the US dollar . The weight of the silver coins was standardized so that one franc weighed exactly 5 grams of 900/1000 silver, i.e. 4.5 grams of fine silver . Gold coins were also minted within the same currency system , with the value ratio of silver and gold being set at 1: 15.5. This system was brought to Italy with Napoleon's Italian campaign (1796/97). The Helvetic Republic existed in Switzerland from 1798 to 1803 ; here France introduced a single currency ( Swiss francs ). In 1803 mint sovereignty returned to the cantons; After Switzerland became a federal state in 1848 , the federal government was responsible for the currency. The Swiss franc was introduced as a currency with the “Federal Law on Federal Coinage” of May 7, 1850; it was based on the French (silver) franc.

Before the official start of monetary union, similar conditions existed in several countries, with coins and banknotes from other countries being partially accepted as a means of payment. Belgium, which emerged as a state after the Belgian Revolution (1830), introduced the Belgian franc in 1832 . The model was the French franc ; its course was linked to this in a ratio of 1: 1. The bimetallism between gold and silver coins stipulated in the Latin Monetary Union was expressed as follows: Two silver 5-franc pieces (= 45 grams of fine silver) corresponded to one golden 10-franc piece (= 2.9032 grams of fine gold), i.e. 15, 5: 1 in the mass ratio of the fineness. In addition to gold coins , only the silver 5-franc piece was intended as a Kurant coin .

Félix Esquirou de Parieu (1815-1893) was the pioneer of the coin system initiated by France in 1865 . He understood the coin system - beyond the financial advantages - as a preliminary stage to a “European Union” with a “European Commission” as political leadership. Napoleon III saw the Monetary Union as a means of "hegemony over continental Europe".

In 1865 France , Belgium , Italy and Switzerland signed a treaty which (since its entry into force on August 1, 1866), in addition to the technical details of these coins, uniformly regulated the issuing policy and mutual recognition. Greece joined the Union on December 21, 1868 . Fluctuations in the silver and gold prices led to the problems inherent in bimetalism, also for the Coin Union, as the forces of the market partially opposed the provisions of the treaty. According to Gresham's law , a compulsory exchange rate between two types of money - here the legally established exchange rate between gold and silver coins - means that the more valuable good types are hoarded or melted down. The poorer , less valuable coins, on the other hand, are used for payment. On the part of the state there is an incentive to increasingly mint the coins that are cheaper to produce and to keep the good types. This led to a temporary shortage of certain and excessive circulation of other coins. The biggest problem, however, was that countries like Italy or Greece printed a large number of paper money denominated in a currency belonging to the Coin Union. The issue of paper money was not expressly excluded in the contracts. Excessive issuance of currency tokens led to inflation (see monetarism ).

The contract, which was originally supposed to expire at the end of 1879, was renewed on November 5, 1878, initially until December 31, 1885, with the decision to discontinue the production of silver 5-franc pieces due to the significantly lower silver price .

In Germany, 1871 silver coins ( dollars ) predominant, the value of which in principle by its silver content covered was ( Silver Standard ; Kurantgeld ). After 1871 - following the English model - the silver standard was replaced by the gold standard . As a result, silver largely lost its monetary importance. The value ratio fell from 1:14 to 1: 100 for a while, later it rose again a little. From 1873 the price of silver fell due to the large German silver sales. Silver inflation in the 1880s prompted the Latin Monetary Union to introduce the gold standard in 1885. On November 6, 1885, a new treaty with partially changed provisions came into being, which remained in force until January 1, 1891 and was then tacitly extended for a further year, provided that a member state did not terminate the contract.

There was no regulation on paper money. Italy and Greece used this loophole to increase the circulation of paper money, which led to inflation. The Italian and Greek silver divide coins therefore flowed from these countries to other countries of the Latin Coin Union and were missing in the coin system of Italy and Greece. Italy therefore applied for nationalization of its silver dividing coins in 1893 and Greece in 1908 (in the Greek case only one and two drachmas, not the rest). The coins were confiscated in the other countries of the Latin Monetary Union and were no longer legal tender there. They were sent back to the countries of origin; the recruiting countries received compensation from Italy and Greece. In Greece, these coins were used to replace paper notes with a face value of one and two drachmas. However, this did not mean the exclusion of Greece from the Latin Monetary Union, as was repeatedly claimed in some media in 2015 in connection with the possibility of a current Grexit . Rather, Greece remained a member of the Latin Monetary Union until its dissolution in 1927. An article by Herbert Hutar in the Wiener Zeitung comes to this conclusion.

On November 4, 1908, the Belgian Congo officially became a member of the Union of Coins.

The First World War led to an enormous need for money. The contracting states (with the exception of Switzerland) were forced to turn away from a currency based on precious metal Kurant coins . Parts of the contract were gradually canceled. The Scandinavian Monetary Union was also abolished as a result of the First World War. After the de facto dissolution of the Latin Monetary Union, Belgium terminated its membership in 1926. On January 1, 1927, Switzerland was the last country to put the coins of the other countries out of circulation.

The following coins were permitted under the terms of the treaty:

Before the introduction of the treaty norms, gold coins at 40 francs and 80 francs (lire) and silver coins at 0.25 francs were minted according to this system. These were withdrawn soon after the contract was signed, as were older coins that corresponded to the weights of the contract, but not in terms of fineness or diameter. Not all approved coins were minted by all member countries.

The coins from 2 francs down were of a lower fineness , which meant that their face value was not completely covered by their metal value, which made them deciduous coins . Dividing coins made of base metal were not part of the contract and were issued according to different standards depending on the member state.

The public coffers of the member countries were obliged to accept the gold coins and the 5-franc pieces (corresponding to lire , Swiss francs and drachmas). It was limited to 100 francs for smaller silver denominations . The circulation of its own paper money and foreign currencies was the responsibility of each member state.

The following states and territories minted coins according to the same system, but with their own national currency denomination, without officially joining the Coin Union:

Character as a means of payment in the contracting states

The coins minted by the non-members according to the system of the Mint Union were not legal tender in the contracting states ; some of them (the gold and large silver coins) nevertheless circulated internationally.

Austria-Hungary and Russia were also indirectly members of this currency union via their almost straight exchange rate: 4  guilders (from 1892: 8  kroner ) = 10 francs and 1 (gold) ruble = 4 francs. As early as 1870 Austria-Hungary minted gold coins of 4 and 8 guilders as trading coins , which had the additional denomination of 10 Fr and 20 Fr respectively .

The Russian-Finnish gold coins of 10 and 20 Markka also corresponded in fineness to the 10 and 20 francs, while the silver coins were not minted according to the regulations of the Latin Monetary Union.

The Austrian economist Theresia Theurl assessed interstate currency unions as fundamentally unstable, as the sovereignty of the individual states calls into question compliance with the rules. “All monetary unions that were not full political unions remained temporary arrangements. They dissolved. "

Due to the history of the Latin currency union, the German historian Dominik Geppert rules out that power-political rivalries could be ended by a currency union. Such an order also absolutely needs a regulation on resignation. The intergovernmental agreements are also fragile and not necessarily credible.

A plausible reason for the dissolution of the Latin Monetary Union was the considerable difference in the economic development of the member countries.