The Kingdom of Serbia ( Serbian Краљевина Србија Kraljevina Srbija ) was a state in the Balkans that developed from the Principality of Serbia and became independent at the Berlin Congress in 1878 . In 1882 Serbia became a kingdom. The state existed until 1918 and then became part of the Kingdom of Serbs, Croats and Slovenes (later Yugoslavia).

A peculiarity of the Kingdom of Serbia was that a significant part of the Serbian population - here especially circles of the army and the ruling class - was inspired by the annexation of territories of the neighboring countries to establish a large empire of the Serbs , which should unite all Serbs. This striving for a Greater Serbia was codified in a secret memorandum from the former Serbian Interior Minister Ilija Garašanin in 1844. The contents of this memorandum, which was only published in 1906 and called Načertanije, became the Magna Charta of the Serbian national movement. A guiding principle was: “Where a Serb lives, there is Serbia”. These foreign policy ideas took up the history of a great Serbian empire in the Middle Ages under Tsar Dušan . This empire was destroyed by the Turks after the lost battle on the Amselfeld . In this respect, the memorandum spoke of the restoration of an old Greater Serbia. After Serbia had freed itself from the Turks and became an independent state in 1878, this endeavor to unite all Serbs in what was now the Kingdom of Serbia was directed against the Habsburg Empire and the other neighboring countries of Serbia. These Greater Serbian ideas remained the “decisive political blueprint” for the Serbian rulers until 1918. At the same time, the guidelines for this policy were imposed on the population via nationalist propaganda, which was partly “coordinated” from “Belgrade” and partly from “patriotic networks in the press”. The ideas of a Greater Serbia were not just government policy, they were deeply anchored in the culture of the Serbs. The areas secretly claimed for Greater Serbia included Bosnia-Herzegovina , parts of Croatia, Albania, Montenegro, Macedonia and areas of Bulgaria and Romania, which were newly established in 1878 and separated from the Ottoman Empire . It did not matter to the Serbs whether the people living there wanted to be integrated into a large Serbian empire . The Serbs believed that in time the people would see the primacy of Greater Serbian goals. For example, the Serbian poet and linguist Vuk Karadžić admitted in his treatise Serbia all and everywhere, referring to the Croats, that there are also "people of the Roman Catholic faith [...] who still find it difficult to call themselves Serbs, but they will get used to it ”. Due to these secret, foreign policy ideas, since the existence of the Kingdom of Serbia there has been a constant, aggressive unrest from the new state on the region. The historian John Keegan speaks of an "aggressive and backward Christian kingdom" in which nationalists secretly fought the Habsburg Empire just as they fought the Ottoman Empire before.

The Principality of Serbia until its replacement from the Ottoman Empire 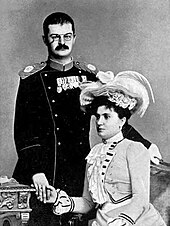 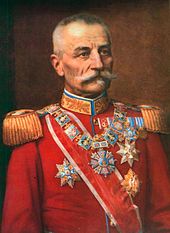 After the participation of the Principality of Serbia in the Russo-Turkish War on the side of Russia and the subsequent Peace of San Stefano , the Principality finally became independent from the Ottoman Empire. Independence was recognized by the Berlin Congress in 1878. In response to the Romanian proclamation of the king in 1881, the Kingdom of Serbia was proclaimed on March 6, 1882, for which Emperor Franz Joseph I personally congratulated King Milan I.

Serbia as an independent state and kingdom

In the Serbian-Bulgarian War (1885-1886), in which it came to the area of ​​Eastern Rumelia, five Serbian divisions advanced on Bulgarian territory. But the young Bulgarian army managed to crush the Serbs without any support ( Battle of Slivnitsa , Battle of Pirot ). Only the intervention of Austria-Hungary saved the Serbian kingdom from further consequences and the war ended with the peace of Bucharest .

In 1887 supporters of the Radical Party attempted an assassination attempt on Milan. Rather unpopular with the people, he was noticed by the European public by compromising his marriage to the Romanian noblewoman Natalia Cheșco with some affairs (including Jennie Churchill ). Finally, he divorced in 1888. The marriage with Queen Nathalie resulted in son and heir to the throne Aleksandar Obrenović . After the prince robbery in Wiesbaden, he lived with his father.

The impetus to renounce the throne was a violent conflict of competencies between the king and the elected government in 1889. After his father's abdication, Aleksandar Obrenović became King of Serbia in 1889. Aleksandar and Draga Obrenović fell victim to an officer conspiracy around Dragutin Dimitrijević , known as Apis, in June 1903 . The murder of the royal couple temporarily broke off diplomatic relations between some of the major powers with Serbia. With the heirless Aleksandar ended dynasty of the house Obrenovic .

It was followed by Petar I. Karađorđević , son of Prince Aleksandar Karađorđević . He initiated liberal reforms, allied himself with Russia and developed relations with France, while at the same time attempting to reduce the influence of the Austro-Hungarian monarchy in the Balkans. From the customs conflict with Austria-Hungary, the “pig war” of 1906, which brought the country to the brink of collapse, Serbia ultimately emerged economically stronger. In 1908 Bosnia-Herzegovina was annexed by Austria-Hungary. This led to a serious and dramatic European conflict, the so-called Bosnian annexation crisis .

While the annexation crisis of 1908/09 could still be resolved peacefully, the situation escalated in 1912 over the question of ownership of Macedonia . Peter I was keen to gain access to the Adriatic for his country . After Montenegro declared war on Turkey on October 8, Serbia, along with Bulgaria and Greece, joined this step on October 17. Within a short time the allies were able to achieve considerable success in the First Balkan War , so that the Ottoman Empire had to request a ceasefire at the end of November when it had lost Albania , Sanjak , Kosovo , Macedonia and Thrace and the Turkish troops reached Istanbul had to withdraw. After the military coup of the Young Turks in early 1913, the fighting flared up again, but Turkey was powerless against the overwhelming power of the Balkans, so that on May 30, 1913, it had to agree to the cession of all areas west of the Enos – Midia line in the London Treaty .

How these areas were to be allocated to the winners was very controversial. The great powers Austria-Hungary and Italy did not want to grant Serbia access to the sea, so they succeeded in ensuring that Albania became independent and the south of Macedonia fell to Greece, while the north mostly came to Serbia. The latter particularly angered Bulgaria , which claimed a historical claim to this area and then attacked Serbian and Greek troops in Macedonia in July 1913 (Second Balkan War). But now Romania , Montenegro, Greece and even Turkey allied with Serbia. Bulgaria had to ask for an armistice on July 30th; in the peace treaty of Bucharest of August 10th, it had to finally accept the Serbian possession of northern Macedonia.

Due to illness, shortly before the outbreak of the First World War , Peter I handed over the management of official business to his son Alexander I. Karađorđević as regent. However, he retained the title of king and reinforced his son in his firm stance towards Austria-Hungary in the July crisis after the assassination attempt in Sarajevo on the Austrian heir to the throne Franz Ferdinand - carried out by terrorists supported by Serbian circles. Serbia was confronted with an ultimatum from Vienna that was unacceptable for a sovereign state, which triggered a chain reaction that led to the outbreak of war across Europe.

The Kingdom of Serbia in World War I.

By the end of 1914, the Serbian army had repulsed three offensives of the Danube monarchy; Belgrade was only lost for a short time. This defensive success cost heavy losses, however, and so the Central Powers were able to conquer and occupy almost all of Serbia during their campaign in autumn 1915 (see Austro-Hungarian occupation of Serbia 1915–1918 ). The royal family had to flee to Corfu .

The creation of the Kingdom of Yugoslavia

Monarch of the kingdom

The largest cities in the state were (in order of population):