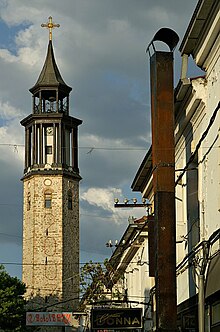 The clock tower in the old town

Prilep ( Macedonian Прилеп ) is a city in the south of North Macedonia , in the northern part of the Pelagonian Plain . It is the center of the municipality of the same name .

For the municipality of Prilep, which also includes 58 neighboring villages, 76,768 inhabitants were counted. 70,878 were ethnic Macedonians, 4,433 were Roma and 1,457 were of a different ethnicity. The Macedonians are majority Orthodox Christianity and belong to the Macedonian Orthodox Church . A small part of the population belongs to Sunni Islam .

In mid-July there is an annual beer festival ("Pivofest") in Prilep . The 4-day event attracts around 200,000 visitors. There are numerous performances by national and international musicians.

The town lies at the foot of the Markovi Kule Castle of the legendary Serbian King Marko Mrnjavčević , also known as Kraljević Marko, around whom many myths have grown. It depicts King Marko as a wise ruler and fighter against the Turks. The eventful history of Prilep is reflected today in the old clock tower, which was once a church tower, in a half-ruined mosque from Ottoman times and a restored wall in the park in front of the town hall. It is a wall of a prison from Ottoman times. In addition to the ruins of the Markovi Kuli castle ("Towers of Marko"), the Archangel Michael Monastery is also worth seeing.

Excavations and sights around Prilep

There are several archaeological sites in the immediate vicinity. A large Roman necropolis and parts of many house walls suggest that this settlement is the ancient Ceramiae. At the Varoš Monastery, which was built on the steep slopes of the hill and where later a medieval community lived, there are also ancient tombs, some of them with carved images of the deceased, which can be viewed in the garden of the monastery.

One of the most important ancient monuments in the area is the city of Styberra , one of the largest ancient cities in Macedonia and at the same time one of the most attractive urban settlements. It is located near the village of Čepigovo, in the central Pelagonia region . Even at the time of the Roman-Macedonian Wars , it was known as the seat of the Macedonian king Perseus . The excavations revealed an archaeological treasure trove from pre-Christian times. Ceramic vessels, coins, marble monuments, over 30 statues of respectable citizens of the city and plaques with inscriptions, the temple of the goddess of hope - Tiha , the architecture, the decorative sculptures, the jewelry, the infrastructure and much more show economic prosperity and much more Importance of the city in ancient times. However, Stybera did not survive the attacks of the Goths (268 AD). The city was never rebuilt.

Another important site is Bela Crkva , 6 km from Styberra, where the ancient Alalkomenai was believed to be .

In Prilep, in front of the Church of the Annunciation of the Lord (built in 1838), there is a Bulgarian and a German military cemetery from the First and Second World Wars , where dead people from other nations are also buried, including a son of President Friedrich Ebert . Both cemeteries could not be maintained for decades and fell into disrepair. The German war cemetery in Prilep has been restored since 2004 by German soldiers from the KFOR contingents and the Volksbund Deutsche Kriegsgräberfürsorge with the support of the German embassy in Skopje and the great commitment of the city of Prilep. On August 29, 2009, the re-inauguration took place with the participation of high-ranking guests from Macedonia, Bulgaria and Germany.

The Prilep train station is on the Veles – Kremenica railway line . The trains of the two pairs of trains that run daily between Skopje and Bitola stop here .