The title of this article is ambiguous. Further meanings are listed under radome (disambiguation) .

Radom [ ˈradɔm ] is a city in the Masovian Voivodeship in the central, slightly southeastern part of Poland - around 100 kilometers south of the state capital Warsaw between the Vistula and the foot of the Holy Cross Mountains . Radom has seven universities and is a major transport hub on the Warsaw - Krakow and Łódź - Lublin lines .

Radom was mentioned for the first time in 1155. The city's heyday was at the end of the 15th century when the Polish King Casimir IV made the city his residence.

With the Third Partition of Poland in 1795, Radom was added to Austria . From 1809 to 1815 it belonged to the Duchy of Warsaw and then to Congress Poland , which was under Russian rule. 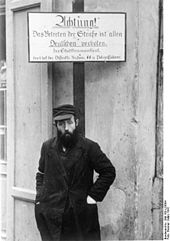 In September 1939 a battle took place in the Radom area , in which technically inferior Polish troops were wiped out by German tank units.

During the German occupation, the Germans operated a satellite camp of the Majdanek concentration camp (on Szkolnastr.) And the Radom ghetto with 30,000 residents. The officers responsible included Karl Oberg , Erich Kapke , Fritz Katzmann , Wilhelm Bluhm , Hermann Weinrich and Herbert Böttcher , who were later convicted as war criminals. In 1940 the Wehrmacht set up the Mitte military training area in the vicinity of Radom . For this, a number of villages in the area were "resettled". The civil administrator of the city was the National Socialist Fritz Schwitzgebel from Saarbrücken.

From 1939 to 1945 Radom was the seat of the Radom District in the General Government . At the end of 1943, DAW German equipment works took over Polish prisoners in the Generalgouvernement and the industrial plants in Radom.

On January 16, 1945, Radom was captured by the Red Army . Some of the Germans who stayed at their place of residence were expelled or murdered. Those able to work had to do forced labor in the industrial plants in Radom or in agriculture. In the spring of 1945, the German men who were fit for work were put together in troops and taken to Soviet camps for forced labor.

In 1976, there was labor unrest in Radom , which was suppressed by security forces.

At the beginning of the 19th century, Protestant Germans settled in and around Radom. So around 1815 they founded the Pomeranian villages Pelagiów and Soltyków. The following colonies followed later: Błonie and Zabierzów in 1838, Małe Studnie and Bobrowniki in 1839, Józefów near Radom and Bartodzieje in 1842, Polesie, Pająków and Leokadiów after 1870. Until 1826 the evangelicals in and around Radom had neither a church, a rectory nor their own Pastor. To satisfy their religious needs they either went to the Lutheran church in Wengrow or the local pastors Goburek or Haupt came to Radom for main worship services or to perform official acts. But due to the long distance and bad roads, this condition was intolerable in the long run. And so here the Protestants wanted a new parish to be formed. The Evangelical Augsburg congregation was founded on September 30, 1826. In 1827 the congregation bought a former Benedictine church, which was then a theater. The building was remodeled and rededicated as a church on August 15, 1828.

In 1827, 1442 Lutherans and 21 Reformed lived in the city. Pastor Julius Krauze opened a Protestant school in Radom, which was converted into an elementary school on January 8, 1843. The Protestant cemetery was founded in 1834. In 1887, Pastor Wüstehube gave the congregation an organ. In the period from 1893 to 1895 the church was rebuilt and expanded. The expenses were largely covered by voluntary donations. Leokadiów, the largest cantorate in the municipality, had a spacious prayer room with a bell tower. In 1938 the prayer room was burned down.

Despite the Second World War and its aftermath, the community still exists today. On September 23, 2001 the 175th anniversary of the foundation of the church was celebrated.

At the head of the city administration is a city ​​president who is directly elected by the population. Since 2014 this has been Radosław Witkowski from Platforma Obywatelska (PO).

In the 2018 election, Witkowski ran for his own election committee. The vote brought the following result:

In the second ballot, Witkowski prevailed against the PiS candidate Skurkiewitz with 53.8% of the vote and thus achieved a second term.

The city council consists of 28 members and is directly elected. The 2018 city council election led to the following result:

The St. Bernard monastery, founded by the Polish King Casimir IV Jagiello in the 15th century, the late medieval St. John's parish church with the Kochanowski family chapel and the baroque Holy Trinity Church are well worth seeing . The oldest church in the city, the Wenceslaus Church from the 13th century, has only been renovated in recent years, with the interior being modernized. The building of the former voivodship administration based on plans by Antonio Corazzi , a splendid work of late classicism , and the town hall in the style of Italian neo-renaissance , built according to plans by Marconi, are very important for 19th century Polish architecture . In odd years, at the end of August or beginning of September, an international air show takes place in Radom.

Transmitter for long wave radio services (not broadcasting) in the west of the city.

The metalworking industry, which determined the economic picture of Radom until 1989, no longer exists in this form, so that as an industrial city, Radom is affected by relatively high unemployment .