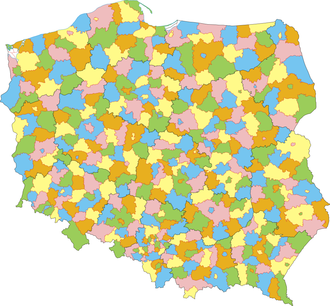 The powiat [ ˈpɔvʲat ], in the plural powiaty , is a territorial administrative unit of the second level of local self-government in Poland . The Polish term powiat literally means circle . In terms of area, the powiat corresponds to the district within the German municipal self-government and lies in the administrative hierarchy below the voivodeship ( województwo ) and above the municipality ( Gmina ). On average, voivodeships have 20 powiate, each made up of 5 to 15 parishes.

The powiate were dissolved in 1975, but reintroduced as part of an administrative reform on January 1, 1999, when the number of voivodships was reduced from 49 to 16. In 2014 there were 380 powiate in Poland, including 314 so-called rural districts ( powiat ziemski ) and 66 urban districts ( miasto na prawach powiatu ).

There are administrative differences between a powiat and the German district. At Powiat, responsibilities are assigned as follows:

The district council is convened by the residents of the district in general elections (with four-year terms).

The Polish counties are therefore regional authorities with a municipal constitution . Like the municipalities, they are legally independent and responsible units.

The districts only take on the tasks that cannot be fulfilled by the municipalities as the actual local self-government and which are explicitly assigned to them as self-government tasks by law. In this respect, they are probably comparable with the offices or administrative communities in Thuringia .

Cities with Powiat rights ( miasta na prawach powiatu ) are the municipalities that also perform the tasks of the districts. Colloquially and also in law , they are called urban districts ( powiat grodzki ) .

Its legislature is the city ​​council ( rada miasta ) and its executive is the city ​​president ( prezydent miasta ) . Both organs are elected by the people (cf. South German Council Constitution ).

For example, Elbląg ( Elbing ) forms its own urban district and does not belong to the Powiat Elbląski ( Powiat Elbing ). The area around the city belongs to the powiat as an independent rural municipality of Elbląg .

Powiate are classified in the regional statistics of the European Union in NUTS 3 or LAU 1 depending on the number of inhabitants (see NUTS: PL ).

The history of the powiate dates back to the 14th century. The word powiat is derived from the Lithuanian powĕta (from wĕta , ancient for city). The Vilna Voivodeship, which was dissolved in 1795, was divided into five powiate ( districts ). At the beginning of the 19th century, the voivodships were much larger than they are today and comprised only two to five powiate.

The Polish term powiat was translated as district in the 19th century .