This article explains the Polish administrative level. For the crown land of the Habsburg Monarchy, see Voivodeship Serbia and Temeser Banat .

Voivodeships in German translation (as of January 1, 2009)

A voivodeship or voivodeship is a Polish administrative district as the highest level of the territorial structure in the Republic of Poland ( ISO 3166-2 level, see ISO 3166-2: PL ) and is on the NUTS-2 statistical level . The next smaller self-governing unit is the powiat (district). There are currently 16 voivodeships in Poland.

The term Voivodship , Polish Województwo is derived from Woiwode (German: Heerführer, Herzog ). In Polish history, this title is in contrast to the title Książę , which is etymologically derived from the Germanic word king , but is also mostly translated as duke . Historically, the Województwa, as administrative units of an orderly state, increasingly replaced the Księstwa (princes or duchies) , which had arisen in ancestral and dynastic fashion .

On January 1, 1999, today's 16 voivodeships were created, most of which are historical areas. Originally 12 voivodeships were planned; however, there were political discussions that increased the number to 16. The additional four voivodships were Heiligkreuz, Opole, Lebus and Kujawien-Pomerania. Political considerations also led to the fact that the Kuyavian-Pomeranian Voivodeship has two official capitals, as does the Lubusz Voivodeship .

Since Poland is a unitary state , the voivodships, unlike the German states, do not have any state quality.

The voivode ( prefect ), on the other hand, is the representative of the (Warsaw) central government, responsible for controlling the self-government of the voivodeships, districts ( powiat ) and municipalities ( Gmina ).

Voivodeships in the 14th to 18th centuries 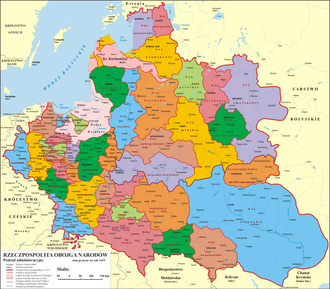 Soon after the overcoming of Polish particularism , the Kingdom of Poland was divided into voivodeships from 1308–1339. Their capitals were often not in the middle, but rather close to the end facing the royal city of Krakow :

In Greater Poland and Kuyavia :

At the time, Mazovia was only connected to Poland by belonging to the Archdiocese of Gniezno . With its integration into the Polish state, it was later divided into voivodeships as well as the Grand Duchy of Lithuania (and its Ruthenian countries, which came under the Polish crown) and Royal Prussia . The royal free cities (Danzig, Thorn, Elbing and Riga until 1621) were excluded from this system.

In the years 1816 to 1837, voivodeships also existed in Congress Poland; these were then renamed provinces and reorganized several times.

Voivodeships of the Second Republic

Since Poland has been known as Rzeczpospolita since the unification of the Kingdom of Poland with the Grand Duchy of Lithuania, the Polish republic is known as the Second Republic between the World Wars.

After the Second World War until 1975, Poland was divided into 17 voivodeships. 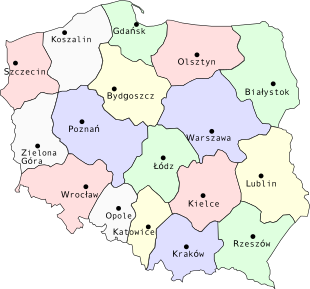 In 1975 the number was increased to 49, officially in order to optimize the state administration, to strengthen the authorities in the regions and to compensate for the disparities in the economic developments between the regions. None of the stated goals were achieved; instead, as expected, the influence of the central government was increased.