Description : In the first field of the emblematic coat of arms in blue a gold patriarchal cross , in the second in red a gold-armored, crowned, silver eagle , the third divided four times by red and silver, in the fourth in blue eight gold, six-pointed stars , set 3: 3: 2.

The patriarchal cross refers to the eponymous Benedictine monastery Heiligkreuz . The eagle can be seen both in the coats of arms of Krakow and Sandomierz , whose historical sphere of influence included the voivodeship, and in the official Polish coat of arms . The division of the third field is represented by the Hungarian coat of arms , referring to Casimir III , who in 1355, in the presence of noblemen from Sandomir , regulated his succession to the throne with Ludwig I , King of Hungary and later King of Poland, which is why it became the coat of arms of the historic Sandomir Voivodeship belonged, like the eight, previously nine, stars in the fourth field.

The Świętokrzyskie voivodeship is divided into 13 powiaty (districts), with the capital of Kielce remaining independent. The city itself does not belong to the district of the same name. 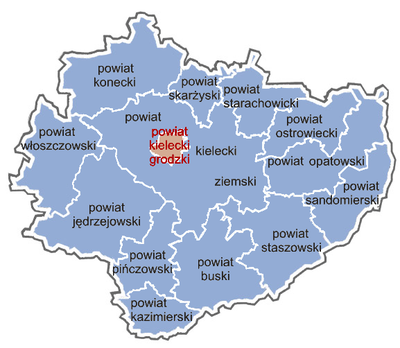 Administrative division of the Heiligkreuz Voivodeship

Kielce is the only major city in the Polish province of Świętokrzyskie. Here - in a central location - the most important traffic routes from Heiligkreuz converge.

With a value of 0.827, Świętokrzyskie comes 14th among the 16 Voivodeships of Poland in the Human Development Index .