The Hungarian coat of arms on the Budapest Liberty Bridge

The "new" coat of arms, which is actually the older one, shows a silver (white) double cross ( patriarchal cross) in red on a green three-mountain , which stands in a golden crown . The double cross in the coat of arms dates from the 9th century, the three mountains ( Tátra , Fátra , Mátra ) from the early 14th century, the crown under the cross was added at the beginning of the 17th century. The first Christian king of Hungary, Stephen the Holy , integrated the double cross into the royal badges at the time of Pope Sylvester II in the year 1000 on March 27th. The cross stood for the apostolic dignity of the Hungarian king. 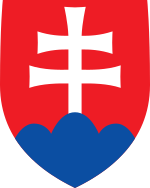 The coat of arms of Slovakia

In the Middle Ages, the "new" coat of arms temporarily stood for the Principality of Neutra and for northern parts of the Kingdom of Hungary ( known as Upper Hungary since the 18th / 19th centuries ), roughly equivalent to the area of ​​today's Slovakia. This is one of the reasons why it has officially been used as the coat of arms of Slovakia (then initially of the Slovak National Council ) since 1848 . The only difference to the new coat of arms is the lack of the crown and the use of the Slavic colors blue - white - red instead of the Hungarian green - white - red.

The "old" coat of arms shows four red and four silver (white) horizontal stripes. Its origin and meaning are controversial. Apparently it originated as a symbol of the Hungarian rulers of the southern border duchy of Hungary, created in Croatia and Dalmatia at the end of the 11th century. It was first used by the border duke Emmerich von Árpád , who later became King of Hungary (1196–1204), and then his successor in Croatia , Andreas , who was also later King of Hungary (1205–1235). According to another opinion, the coat of arms did not emerge until 1198, when Emmerich married the princess Constanceia of Aragón and created his own coat of arms by changing the coat of arms of the Aragon family (today's coat of arms of Spain ). There is still the opinion that the "old" coat of arms had a certain meaning. The most common interpretations are:

The coat of arms is crowned by the Stephanskrone , the Hungarian royal crown.

The “new” coat of arms of Béla III was the first coat of arms of the king in the true sense of the word. used in a crusade, then without the three mountains. His successors Emmerich (1196–1204) and Andreas II (1205–1235) used the “old” coat of arms. When the country was temporarily divided into two parts under Béla IV (1235–1270) in 1262, the "new" coat of arms was the symbol of the northwestern part and the "old" coat of arms that of the other part under the sovereignty of Stephen V. The last king from the family of the Árpáden , Andreas III. (1290–1301), again used the double cross. During the battles for the throne after the Árpáden died out, the Bohemian King Ladislaus V (1305–1306) and his successor Otto von Bayern (1305–1307) led only north-west Hungary (about the area of ​​what is now western Hungary , Burgenland ) and western Slovakia dominated the “new” coat of arms, including the three mountains. Karl Robert von Anjou (1307-1342), on the other hand, used a two-part coat of arms consisting of the symbol of the Anjou family and the "old" coat of arms (stripes) of the former King Stephen V (see above), whose daughter Maria he married.

Since the Habsburgs became the kings of what was left of the Kingdom of Hungary after the Turkish conquests in 1526 , the current Hungarian symbol has been used. The small crown under the cross was only added in the 17th century.

At times there was a large national coat of arms, which, like that of King Sigismund, contained the symbols of other parts of the country and had today's coat of arms in the middle.

After the First World War , the royal coat of arms was abolished in 1918. For a short time, Kossuth's republican coat of arms from 1848 was in effect again, but was soon replaced by the Red Star during the short communist dictatorship of the Soviet Republic in 1919 . After its suppression and the reintroduction of the monarchy in 1919 ( without a king, with a permanently vacant throne under the imperial administrator Miklós von Horthy ), the royal coat of arms with St. Stephen's crown was in effect again until 1944, but expanded with two angels floating on the side.

When the fascist Arrow Cross Party came to power in 1944, the angels on the side were omitted; instead, the coat of arms was placed on a dark green arrow cross (eponymous symbol of the Arrow Cross Party) and a red H (for their ideology "Hungarism").

From 1946 to 1949 the republican Kossuth coat of arms from 1848 was in effect again. After the Communists came to power in 1948, the Stalinist coat of arms with hammer and ear (as a symbol of workers and peasants), framed by a corn wreath with a red star, was applied from 1949 Unofficially called the Rákosi coat of arms to the Stalinist Communist Party leader Mátyás Rákosi .

After the collapse of communism in 1989, there were sometimes heated discussions in the Hungarian parliament in the summer of 1990 about Hungary's new, democratic national coat of arms. Many MPs spoke out in favor of the republican Kossuth coat of arms from 1848 (shield-shaped and without St. Stephen's crown), but finally the compensation coat of arms from 1867 prevailed in the vote (see above).

Commons : Coat of Arms of Hungary  - Collection of images, videos and audio files

Coats of arms of the states of Europe