This article or section needs to be revised: all open points on the discussion page - Flominator 09:53, Jan. 21, 2018 (CET)
Please help to improve it , then remove this flag.

Imre Nagy [ ˈimrɛ ˈnɒɟ ] (born June 7, 1896 in Kaposvár , Hungary , † June 16, 1958 in Budapest ) was a Hungarian politician and agricultural economist. Within the communist party he was at times considered a dissident , but was twice head of government. Because of the Hungarian uprising in 1956 and his execution in 1958, he is now considered a national hero .

Nagy was born into a farming family. He was trained as a machine fitter and lathe operator. Drafted into the Austro-Hungarian army at the beginning of the First World War , he was captured by the Imperial Russian Army in 1915 . In captivity he became a member of the RSDLP and served in the Red Army . He also took part in the October Revolution .

Nagy returned to Hungary and was briefly a member of the communist government of the Hungarian Soviet Republic of Béla Kun in 1919 . Under the Horthy government, he emigrated to the Soviet Union in 1929, where he did agricultural research and was an active member of the Hungarian section of the Comintern . In 1944 he returned to Hungary with the Red Army.

Imre Nagy, who in 1945 carried out the Hungarian land reform as agriculture minister of the Communist Party MDP ( Magyar Dolgozók Pártja , ' Party of the Hungarian Working People ') , replaced Mátyás Rákosi as prime minister on June 13, 1953 as part of the de-Stalinization , who however remained the CP party leader. Nagy set a radical reform policy in motion and for many Hungarians became a beacon of hope for a better future. When he propagated the idea of ​​“national and human socialism ”, an inner-party power struggle began again, in which the Stalinist group of his predecessor Rákosi prevailed. Imre Nagy was removed from office on April 14, 1955 by the party leadership of the MDP , four days later removed from parliament as prime minister and expelled from the party a few months later.

In the restorative phase that followed, some reforms were reversed, until in February 1956 the secret speech of the Soviet party leader Nikita Khrushchev against Stalinism became known internally. In some countries of the Eastern Bloc a revision of the party line has now been called for and in Poland the Poznan uprising began . In Budapest, only Matyás Rákosi's party chairmanship passed to his deputy Ernő Gerő , which in no way diminished the dissatisfaction, especially among students and intellectuals. 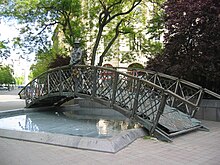 As the student protests of October 23, 1956 - which had officially started in support of the workers in Poland - grew into the Hungarian popular uprising , the protesting crowd moved to parliament and demanded the retired 60-year-old Imre Nagy resign. The Communist Central Committee then reinstated him as Prime Minister. On October 28, Nagy officially recognized the revolution . He formed a multi-party government and demanded parliamentary democracy and Hungary's neutrality . The Hungarian army and freedom fighters were united to form the National Guard and placed under the leadership of Béla Király . 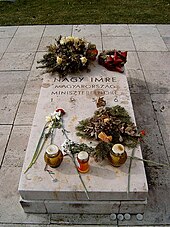 Cenotaph for Imre Nagy in the Père Lachaise cemetery

Three days after Imre Nagy proclaimed neutrality on November 1, 1956 and terminated his country's membership in the Warsaw Pact , Soviet tank units advanced into Hungary and bloodily suppressed the revolution. Around 2,500 Hungarians were killed in the fighting in Budapest that lasted until November 15th. The hoped-for help from the West, which Radio Free Europe had announced, did not materialize.

Nagy had the resistance organized in western Hungary and kept some escape routes open to Austria , on which around 210,000 Hungarians had been able to flee by November 21, 1956. He himself fled to the Yugoslav embassy, ​​which was then surrounded by Soviet tanks for three weeks. When the new head of government János Kádár assured him of impunity , Imre Nagy left the embassy on November 22, 1956, but was arrested by the KGB with his companions and deported to Romania in solitary confinement .

A year and a half later, he was subjected to a top secret trial , but it was recorded on magnetic tape . Nagy was convicted on June 16, 1958 of treason and attempted overthrow of the "people's democratic state order". That same day, he was hung to death in Budapest prison .

At the beginning of the trial, Nagy protested the secrecy and told the judge that he felt he was a scapegoat .

Even after the verdict was pronounced, he continued to refuse any admission of guilt, saying:

"My only consolation is that the Hungarian people and the international working class will acquit me of those grave allegations."

"I'm not asking for mercy."

Nagy and other executed people were buried face down in a mass grave in Budapest. Before that, they had been buried in the prison yard.

A grave of honor was donated to him at the Père Lachaise cemetery in Paris , as it was not possible to commemorate himself or others who died in the uprising during the time of communist rule in Hungary.

After the political change in 1989, Imre Nagy was officially rehabilitated in Hungary, his body exhumed and solemnly buried on June 16, 1989, shortly before the death of his opponent János Kádár. On July 6, 1989, the day Kádár died, the Hungarian Supreme Court absolved Imre Nagy and his companions of all guilt regarding the events of 1956. His grave is located in the new Budapest city cemetery Új köztemető (plot 301). Long before that, the reburial of his body had been requested, including in 1988 by the Budapest student leader and later Prime Minister Viktor Orbán .