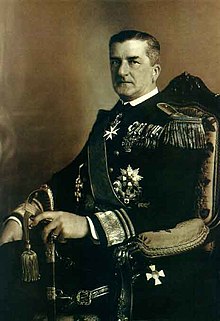 After the defeat of the Hungarian Soviet Republic under Béla Kun in the Hungarian-Romanian War , Horthy consolidated the state and introduced an authoritarian system of government in Hungary, in which the majority of the population was excluded from parliamentary elections. He assumed the role of a strong head of state, but largely left the legislative and executive powers to the heads of government he appointed. Hoping to regain the territories lost for Hungary in the Treaty of Trianon , Hungary under Horthy approached fascist Italy and the Third Reich from 1932 onwards.

In autumn 1938, as a result of the First Vienna Arbitration , Horthys annexed large parts of southern Slovakia , which was settled by Magyars , after the defeat of Czecho-Slovakia , Horthy let Hungarian troops invade the newly formed Slovak state , which led to the Slovak-Hungarian War . As a result of the Second Vienna Arbitration Award, Hungary received northern Transylvania from Romania . During the Second World War , the Hungarian army took part in the Wehrmacht's attack on Yugoslavia and the Soviet Union .

Horthy came from a small nobility family residing in the Great Hungarian Plain and belonging to the Calvinist faith.

His official title "Knight" refers to the Vitézi Rend (about: Knight Order) initiated by him and established by Law XXXVI / 1920 § 77 .

He married Magdolna Purgly in 1901. They had four children together, two sons, Miklós and István, and daughters Magdolna and Paula. István Horthy was his father's deputy from 1941. He died as a fighter pilot in the Hungarian Air Force on the Eastern Front in 1942.

Determined from the start for a career in the Kriegsmarine , he graduated from the Naval Academy in Fiume . After being retired as a midshipman in 1886, he began his officer service, which took him on various ships far across the Adriatic and the eastern Mediterranean into Pacific waters. From 1909 to 1914 he was a wing adjutant to Emperor Franz Joseph I. When the First World War broke out , he returned to service in the fleet and proved himself in several missions such as the battle in Otranto Street . At times he commanded the SMS Prinz Eugen , rose to Vice Admiral and from February 1918 was the last in command of the Austro-Hungarian Navy . On October 31, 1918, on behalf of Emperor Charles I , he had to hand over the fleet to the newly founded Kingdom of Yugoslavia .

After the fall of the Habsburgs in Hungary and the establishment of a council republic under Béla Kun in 1919, he joined the conservative counter-government formed in Szeged as defense minister and led the fight against the council government. After the victory he entered Budapest on November 16, 1919 at the head of the conservative troops ("National Army") . In the years 1919/20 there were numerous White Terror actions against socialists , communists and Jews . Formally, the majority of the perpetrators belonged to the national army. The question of to what extent Horthy was directly responsible for their actions is controversial.

The monarchy in Hungary was immediately restored by the new government, but a return of the Habsburgs for domestic and above all foreign policy reasons was out of the question for the time being. So who chose Hungarian National Assembly on March 1, 1920 Horthy as Regent (Hungarian kormányzó ) with 131 of 141 votes for the provisional head of state. After the official removal of the House of Habsburg-Lorraine, he remained head of state of the "monarchy without a king". After trying to conclude an armistice with the Soviet Union , the German Reich , which had previously been allied with Hungary, forced his resignation on October 16, 1944 and then arrested him.

In Horthys Hungary the concept of the people's national was drafted, which emphasized the “authentic” Hungarian character. The liberalism was rejected as something strange and cause of all evil, pursuing the concept of a racial nationalism. It has been said that the Hungarian people have an intrinsic specific character. The Jews in Hungary were accused of endangering Hungarian culture. Since Jews also took part in the Soviet Republic in 1919, the enemy image of the " Judeobolshevik " was drawn up from then on .

As a conservative , Horthy endeavored to preserve the authoritarian social order of Hungary intact, which included, above all, the preservation of the privileges of the nobility and their leading role in the state. Although he had headed the counter-government of Szeged (1919) and represented its program, he weakened the radicalism of the "Szeged Program", which aimed at a right-wing extremist revolution. Although Horthy also wanted to integrate the workers and peasants into his state in a paternalistic way, he did not carry out any general land reform in the interests of the nobility . Under the Prime Minister, István Bethlen (1921–1931), who was appointed by him , the regime pursued a conservative-authoritarian course, whose right-wing extremist successor Gyula Gömbös (1932–1936) was already openly trying to establish a fascist dictatorship based on the model of Benito Mussolini's Italy and later Adolf Building Hitler's Germany.

First, Horthy had to accept the drastic terms of the Peace of Trianon in 1920, through which Hungary lost two-thirds of its pre-war territory and one-third of its pre-war Magyar population. As a result, he took the lead in a revisionist and irredentist policy under the motto Nem, nem, soha! (“No, no, never!”) Endeavored to regain all lost territories in order to restore the kingdom of Saint Stephen within its historical limits . This desire later led to cooperation with the National Socialist German Reich .

Aware of the military weakness of his country, but also with a reasonable assessment of the anti-Habsburg sentiment in large sections of the population, Horthy prevented two attempts at restoration by King Charles IV in 1921 ; the second ended with a battle near the Budapest suburb of Budaörs on October 29, 1921. Since the states of the Little Entente would have viewed any Habsburg restoration as a reason for war, the king was banished to Madeira and the House of Habsburgs was deposed from the Hungarian throne.

Because Hungary was too weak for a revisionist policy on its own, the country sought allies. This then led in the 1930s to a close association with fascist Italy and austrofascist Austria . This policy, which was emphatically supported by Horthy, culminated in the Roman Protocols of March 17, 1934, but was then no longer effective due to the increasing weakness of Austria and Italy.

Instead, Horthy's Hungary relied increasingly on the German Reich, the strongest revisionist power. The rapprochement served, among other things, a state visit on the occasion of the launch of the heavy cruiser Prinz Eugen on August 22, 1938, which was baptized by Horthy's wife. After the Munich Agreement of 1938, this policy bore its first fruits in the First Vienna Arbitration Award of November 2, 1938, with which parts of Slovakia came to Hungary. In 1940 Hungary joined the three-power pact of the so-called Axis powers Germany, Italy and Japan . As a result of Hitler's mediation, in the Second Vienna Arbitration Award in 1940 , Hungary received back from Romania a part of Transylvania that was predominantly inhabited by the Hungarian-speaking Szeklers .

Anti-Semitism and the Holocaust

The first anti-Jewish law under Horthy - encompassing a special numerus clausus for Jewish students - came from September 1920. It made it difficult for the Jewish minority (6.2% of the total population) to enter the university and make employment in the civil service practically impossible. From 1938 a number of anti-Jewish laws were enacted in Hungary. These laws bore features of the Nuremberg Race Laws . From 1940 the Jews from the Hungarian-occupied areas, such as southern Slovakia and Transylvania , were driven to the Generalgouvernement of Galicia , where they were ultimately exposed to German control. Contrary to the wishes of the German government, Hungary refused to extradite its Hungarian Jewish residents or to allow them to be transported to camps.

This situation changed when, after the German occupation, the puppet government under Döme Sztójay (March – August 1944) took an active part in the Holocaust . The deportation of Jewish Hungarians to Auschwitz began on May 15, 1944 and lasted until July 9, 1944, when Horthy had the transports stopped and thus largely spared the Jewish population of Budapest. This happened under international pressure, u. a. from Sweden, the United States and the Vatican after the so-called Auschwitz Protocols were published in Switzerland. 437,000 Jewish Hungarians had already been deported by this time. Only a quarter of the previously more than 800,000 Jewish Hungarians survived the Holocaust.

Fall and end of life

Horthy buried in Kenderes in 1993

After Horthy had commenced armistice negotiations with the Red Army on October 15, 1944, he was overthrown by SS troops at the Panzerfaust company and interned at Hirschberg Castle on Lake Haarsee in Bavaria, while the fascist Arrow Cross Party under Ferenc Szálasi took over government. He was liberated by the US Army on May 1, 1945 . In 1948 he went into exile , first to Switzerland, then to Portugal. He wrote his memoirs , which he published in German in 1953 under the name Nikolaus von Horthy. Here he defended his revisionist foreign policy and declared that he wanted only the best for his country. He condemned the Stalinist rule in Hungary and the suppression of the 1956 uprising .

Horthy died on February 9, 1957 in Estoril and was buried there. In his will he decreed that his body should not be brought to Hungary until all Soviet troops had left the country. In 1993, two years after the withdrawal of the Red Army, his remains were transferred from Estoril to Hungary and buried on September 4th in a mausoleum with state subsidies and in the presence of several members of the Hungarian government in the local cemetery of his birthplace Kenderes.

After surveys in Hungary in 2002 showed a mostly negative assessment of Horthy, his image turned more and more into a Hungarian hero under Viktor Orbán's government . Ultra-conservative church representatives, the right-wing extremist Jobbik , other anti-Semitic groups and MPs from Orbán's own national-conservative party Fidesz worked to restore Horthy veneration. In June 2017 Orbán praised Horthy as an "exceptional statesman". The Union of Hungarian Jewish Congregations and the World Jewish Congress criticized the veneration of Hitler's ally. The historian Krisztián Ungváry classified Orbán's testimony as a primary campaign for the 2018 parliamentary elections in Hungary . The message is clear: “We are good, valuable and innocent. Anyone who questions these statements is either a Jew, a foreign agent or a communist. "

Head of State of Hungary