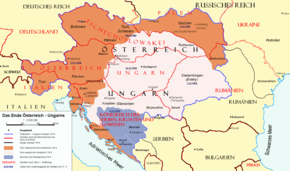 The Treaty of Trianon , also known as the Trianon Peace Treaty or the Trianon Peace Dictate , was one of the suburban Paris treaties that formally ended the First World War . Signed on June 4, 1920, it sealed the secessions from the Kingdom of Hungary that took place in 1918/19  - linked to Austria in Realunion until 1918 - after the war lost for the dual monarchy . Under international law, Hungary had to take note of the fact that two thirds of the territory of the historic kingdom fell to various neighboring and successor states. The Hungarian delegation signed the contract on June 4, 1920, with objection. 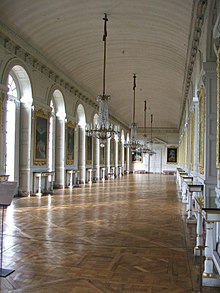 The place where the contract was signed: the Galerie des Cotelles in the Grand Trianon Castle

The Paris negotiations were preceded by several splits of individual parts of the country: 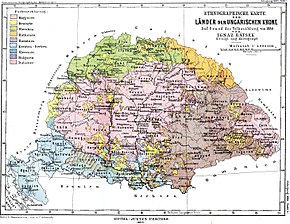 Ethnic map of the Kingdom of Hungary

Territories of Hungary lost to Romania by the Treaty of Trianon

For the most part, the facts had long been created when Hungary was invited to Paris at the end of 1919, after negotiations with Austria . The treaty was signed so late because defeated Hungary was going through political turmoil in 1918 that worried the Allies. After Hungary's exit from the Danube Monarchy on March 21, 1919, the Hungarian Soviet Republic was proclaimed and after failed negotiations with the Entente about the future borders of Hungary broke on March 15-16. April 1919 the Hungarian-Romanian War ended . The Treaty of St. Germain (signed by Austria on September 10, 1919) had also already made the decision that German West Hungary would fall to Austria and that Austria would border on Czechoslovakia (and no longer on Upper Hungary ). Hungary unsuccessfully demanded a revision and a referendum on the areas to be ceded. Like Austria, Hungary was viewed by the Entente as a loser from the war and not an equal negotiating partner.

The signatory powers included Great Britain , France and Italy , Japan , Belgium , Siam , Greece , Nicaragua , Panama , Poland , Portugal , Romania , which was resurrected in autumn 1918 , and the newly formed Serbian-Croatian-Slovenian Kingdom (with Serbia as the first of Austria -Hungary attacked in August 1914) and the new Czecho-Slovakia (the Czechs in exile in the USA had already argued there during the war for their common state with the Slovaks). The United States did not sign the treaty. Hungary and the United States concluded peace in Washington, DC with a separate treaty based on the Trianon Treaty , but without the articles of the League of Nations , in which the United States only had observer status.

German West Hungary, called Burgenland by the Austrians since 1919 , was to be attached to Austria; one of the few provisions of the Trianon Treaty that had not yet been implemented when it was signed. Hungarian irregulars, however, shot at the Austrian gendarmerie and initially prevented Austria from administering Burgenland. Ödenburg ( Sopron ) was planned as the state capital. The referendum held in December 1921 in the city and the surrounding villages on the mediation of Italy was in favor of Hungary; Most of Burgenland was annexed to Austria in autumn 1921 without a referendum.

Because the borders were often drawn according to strategic aspects, around three million Magyars came under foreign suzerainty. Most of the Magyars outside Hungary lived in border areas - in southern Slovakia , in Carpathian Ukraine (1,072,000), in Vojvodina (northern Serbia), in Partium and Prekmurje ( Slovenia , 571,000) and in Romania (1,664,000; data on Based on the 1910 census). In Romania and in today's Slovakia there were islands with a predominantly Hungarian population, today the Hungarians are partly the minority there. 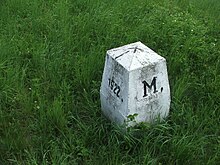 Boundary stone from 1922 on the Hungarian-Romanian border

The Magyars were indignant and shocked after the Treaty of Trianon, as the areas that had fallen away or were to be ceded had gradually come under the Kingdom of Hungary since the 11th century . The slogan of the resistance fighters at the time was “No! No! Never !! ” (Hungarian: Nem! Nem! Soha !!) . The flags throughout Hungary were lowered to half mast by the First Vienna Arbitration Award in 1938. Only then were they raised again by a third.

The Vienna arbitration awards of 1938 and 1940 under the direction of National Socialist Germany corrected Trianon in the spirit of Hungary, but were declared invalid from the start in 1945/47 ("ex tunc"). Thus the Treaty of Trianon (like that of St. Germain with Austria) is still valid and part of the legal system of all successor states. After the end of the Second World War, the results of the Paris Peace Conference brought Czechoslovakia small territorial gains south of Bratislava / Pozsony / Pressburg . No major power has challenged the Trianon Treaty since 1945.

On June 4, 2010 - 90 years after the signing of the treaty - the Hungarian parliament celebrated the so-called National Unity Day for the first time . Slovakia felt provoked by this. 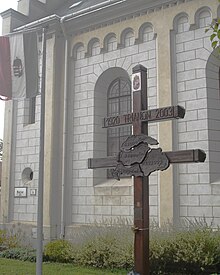