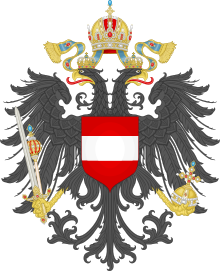 Small coat of arms of the Austrian states from 1915: the shield placed on the chest of the Austrian double-headed eagle, floated over by the Rudolf's crown, in the claws of the imperial orb, imperial sword and scepter ( imperial jewels )

After the establishment of the dual monarchy in 1867, Cisleithanien ( Latin ; also Zisleithanien , land on this side of the Leitha ) was an unofficial term for the northern and western parts of Austria-Hungary , especially in the civil service and among lawyers . The German speakers of the monarchy otherwise simply called this Austria ; the Slavic crown lands , however, did not want to be subsumed under this term.

Until 1915, the official domestic name for this part of the empire, which like the other part of the empire was now an autonomous state, was the kingdoms and states represented in the Reichsrat , then Austrian states until the collapse of the dual monarchy in 1918 . The eastern counterpart to Cisleithanien was called Transleithanien .

The designation The kingdoms and countries represented in the Reichsrat refers to the common parliament of these countries, the Reichsrat in Vienna , from which the countries of the Hungarian crown left in 1867.

The term Cisleithanien , conceptually based on the view of the capital Vienna on Hungary, is derived from the Leitha river , which in parts formed the border between Lower Austria and Hungary and was mostly crossed when traveling south of the Danube from Vienna to Budapest , right in the middle Tradition of the Enns as a traditional inner-Austrian border between the Obderennsischen and the Unterdennsischen Austria. However, the designation ( anticipated in 1867 in speeches in the Imperial Council with the countries on this side of the Leitha ) lacked geographical accuracy, as large areas of Cisleithania were neither on this nor on the other side of the Leitha, but in the north and northeast ( countries of the Bohemian Crown : Bohemia , Moravia and Austrian Silesia ; then Galicia and Bukovina ) and in the south of the state ( Austrian coast , Carniola , Dalmatia ). Analogous to Cisleithanien, the Kingdom of Hungary with the semi-autonomous Kingdom of Croatia-Slavonia belonging to the countries of the Hungarian St. Stephen's Crown was unofficially called Transleithanien . Bosnia-Herzegovina , occupied by Austria-Hungary in 1878 and incorporated into the Reichsverband in 1908, was a condominium for both parts of the empire, neither in Cis nor in Transleithania.

The term can be found in the Royal Prussian State Gazette and the successor German Reichsanzeiger from 1867.

The name Austria was officially used for Cisleithanien after 1867 mostly only in the term Austria-Hungary, only unofficially also alone. However, with the constitution of the state of 1867 , part of the December constitution, the " Austrian " citizenship was explicitly established for the kingdoms and states represented in the Reichsrat :

"For all members of the kingdoms and countries represented in the Reichsrathe there is a general Austrian citizenship right."

This statement should emphasize the togetherness of Cisleithania as one state. It was not until 1915 that “Austria” became the official name of Cisleithania in general; a decision by the emperor and the kk government in the First World War , against which not only the Czechs would have fiercely resisted, would it have been discussed in the Reichsrat. It would also have been questioned that for all crown lands only the colors red-white-red of the shield , originally the colors of Lower Austria , were in the coat of arms. In 1915 a new joint coat of arms was designed for Austria-Hungary: the double-headed eagle, previously also a small coat of arms for the entire monarchy, was now used exclusively for Austria. The practical effectiveness of the changes decided in 1915 remained low because of the war and became obsolete in 1918.

Like Transleithanien, Cisleithanien had its own government appointed by the emperor from 1867 to 1918, at that time mostly a ministry (the name of the head of government followed if necessary); This did not mean the individual department, but the government as a whole (see also the overall ministry ). In accordance with the December constitution of 1867, the constitutional basis of Cisleithania, it was responsible for all affairs (in 1917 the Imperial and Royal Ministry for Social Welfare was created under Emperor Charles I ).

Exceptions were the common army (but not the Imperial and Royal Landwehr ), the Imperial and Royal Navy and foreign policy; These agendas had to be carried out by the Council of Ministers for Common Affairs , in which, in addition to the kuk minister of the imperial and royal house and foreign affairs as chairman, the kuk war minister (until 1911 Reich war minister) and the joint finance minister (until 1903 Reich finance minister) the kk prime minister as well as his Hungarian counterpart had seat and vote.

At the beginning, Cisleithanien contributed 70% to the costs of the common affairs, in the end approx. 64%.

The authorities of Cisleithania were officially designated as imperial-royal (kk) , as had previously been the case with all authorities of the Austrian Empire , which was a unified state until 1867 ; "Kk" stood for the Emperor of Austria (the Rudolf crown ) and after 1867 for the King of Bohemia (the Wenceslas Crown ), the two highest-ranking rulers of the Habsburgs in the individual crown lands of Cisleithania. (Until 1867 the second k should stand for the Hungarian crown.) The few common institutions of the dual monarchy for Cis- and Transleithanien now operated as kuk , the common army only from 1889. The abbreviation kk in historical texts after 1867 is therefore mostly a reference on the fact that the so-called institution did not affect the Hungarian half of the empire.

The Supreme Audit Office was directly subordinate to the Kaiser ; its president had ministerial rank. (There was also a common court of auditors for common affairs.) 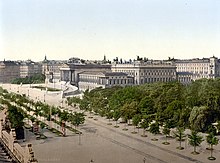 The Imperial and Royal Reichsratsgebäude (today parliament) on Vienna's Ringstrasse before 1900, taken from the Burgtheater ; on the right the Rathauspark ; the Pallas Athene fountain , which is not yet visible here, was built from 1898 to 1902

The government was responsible to the Reichsrat, but it did not have the right to recall it. The emperor was also not forced to take into account the majority situation in the Reichsrat when appointing the Prime Minister. Since the 1880s, the party landscape in the House of Representatives was so fragmented by ideological and national differentiation that no kk government could rely on a stable majority in parliament. There was no official language in the parliamentary sessions and no interpreters, so that the functioning of parliament was deliberately and unintentionally disturbed by language problems alone. The national contradictions, not hindered by the Reichsrat's rules of procedure, often clashed so strongly that parliament was postponed for months by the emperor at the suggestion of the government. The Reichsrat was also adjourned when the declaration of war had to be discussed in 1914.

The Reichsrat, like the Hungarian Reichstag, elected from among its members a delegation of 60 members, 40 from the House of Representatives and 20 from the Manor House for parliamentary deliberation on common matters. The delegations usually met annually alternately in Vienna and Budapest, in parallel, but not together. The key to financing common affairs had to be revised about every ten years. For this purpose, a small deputation was elected by the Reichsrat, which had to negotiate with a Hungarian deputation.

As a court under public law, Cisleithanien had the Imperial Court of Justice , and from 1876 to the Administrative Court, in criminal and civil law a court organization similar to that of today's Austria . Military personnel were subject to military jurisdiction . There was no common court for both halves of the empire.

The crown lands of Cisleithania

The kk Landeschefs , representatives of the emperor and the kk government in Vienna and mostly designated with the title governor , mostly officiated in the respective capital of the crown land. An exception was the state of Vorarlberg, which was assigned to the Lieutenancy in Innsbruck, Tyrol; others were the crown land of Gorizia and Gradisca and the crown land of Istria, for which the governor in Trieste was responsible. In both cases there had previously been larger territorial units that had been divided into the now crown lands in 1861. In both cases the governors published joint state law gazettes in which (mostly separate) legal texts for all crown lands assigned to them were published.

Each crown land, with the exception of the statutory cities , was subdivided into districts administered by district authorities, each headed by a district captain appointed by the imperial government, who had to ensure the application of the laws at the district level. Each district was divided into autonomous local parishes with elected mayors. Similar to today's Austria , the judiciary was organized by the state; the crown lands had no influence on this, even if the courts were named regional courts.

A summarizing table of the areas and population of the crown lands in 1910 can be found here .

Cisleithania disintegrated in October / November 1918 after the victors of the First World War had already worked towards the dissolution of Austria-Hungary during the war and the representatives of the nationalities of Cisleithania announced their intention to separate when the Reichsrat was reconvened in spring 1917. In the fallen parts of the disintegrating state, politicians of the respective majority nation took over the government from the imperial and royal governors and the state committees of the crown lands .

The appointed by the Emperor on 27 October, when the media liquidation Ministry called Cabinet Lammasch , only for what is now Austria without Burgenland responsible, handed over his agendas in early November 1918, the German-Austrian State and was designed by Charles I am 11 November 1918 in Vienna formally relieved. On that day the emperor himself renounced any share in government affairs.

The next day the last meeting of the Reichsrat took place in the House of Representatives in the morning; In the afternoon the manor house was abolished by the Provisional National Assembly for German Austria, which proclaimed the republic.

Prime Minister of Cisleithania in Austria-Hungary