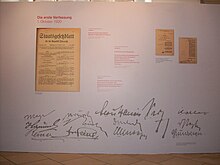 Facsimile of the originally announced B-VG from 1920 with enlarged signatures, shown in the exhibition “90 Years of the Federal Constitution”.

The B-VG was passed on October 1, 1920 by the Constituent National Assembly as a law of October 1, 1920, which establishes the Republic of Austria as a federal state (Federal Constitutional Law) . After almost two years it replaced a constitutional provisional arrangement that had been set up by the Provisional National Assembly after the end of the First World War . However, no agreement could be reached on important parts of the formal constitutional law. This original version did not contain any regulations on the distribution of competencies between the federal and state governments, on the financial constitution or on fundamental rights. The content of the first version was strongly influenced by its author Hans Kelsen , while important contributions came from Karl Renner , Michael Mayr and other politicians.

In 1929 the second major amendment was carried out, which in particular expanded the power of the Federal President and introduced the election of this office by the people. The B-VG was then re-announced under the title Federal Constitutional Law in the version of 1929 .

Before the end of the Second World War in Austria, a declaration of independence was published on April 27, 1945 by three parties ( SPÖ , ÖVP and KPÖ ). According to this, the Republic of Austria is to be restored in accordance with the constitution of 1920. A few days later, on May 1, 1945, the Constitutional Transition Act was passed, which put the B-VG and other laws in the version from before the corporate state, including the changes from 1929 into force again. The provisional constitution itself was published on the same day with the StGBl. No. 5/1945 published. With the decision of the National Council of December 19, 1945 (2nd V-ÜG), the B-VG is deemed to have come into full force again.

On June 12, 1994, the federal people approved the amendment to the B-VG in a referendum. According to the prevailing view, this was an overall amendment to the Federal Constitution , which is why the referendum was mandatory. As part of the necessary amendment, which enabled Austria to join the European Union , the title of the B-VG was set to the Federal Constitutional Act (B-VG), which is still in force today, and the wording "in the version from 1929" was shortened.