The President is in accordance with Art. 60 5 para.  Federal Constitution , the six-year elected head of state of the Republic of Austria . (Even if this is not made evident for every function, the constitutional rules basically apply equally to citizens.)

Alexander Van der Bellen has been the incumbent since January 26, 2017 .

Presidential office in the Leopoldine wing of the Hofburg 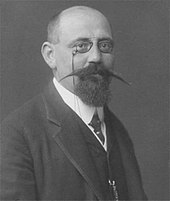 In the deliberations on the Federal Constitutional Law (B-VG) from 1919, the Christian Socialists in particular had insisted on a separate head of state. By March 1919, the three presidents of the Provisional National Assembly had performed these functions, subsequently Karl Seitz , (First) President of the National Assembly, as an individual. The Social Democrats, on the other hand, preferred a variant in which the President of the National Council should assume the duties of the head of state, since they did not want to create a "substitute emperor". As a compromise, the Federal President was created as a separate state body in 1920, but his powers were only very weak. The Federal President was elected by the Federal Assembly.

Legal acts of the Federal President

Legal acts of the Federal President are known as resolutions . They usually require countersignature (see below). While so-called certificates of appointment are issued when a new government is appointed and sworn in , the dismissal of the government does not require a written form, but only has to be brought to the attention of those affected. You can therefore also be released against your will.

Binding to proposal and countersignature

The following acts by the Federal President do not require a proposal :

The following acts by the Federal President do not require a countersignature :

Appointment of the federal government

So far, only three cases have become known in which a Federal President refused to appoint proposed government candidates. Karl Renner refused to appoint a minister who was suspected of corruption, Thomas Klestil refused to appoint two ministers. Criminal proceedings were ongoing against one of the two at the time the government was formed, the other was noticed during the election campaign with extreme, xenophobic statements. In the run-up to these powers of the Federal President, Theodor Körner flatly rejected calls by ÖVP Chancellor Leopold Figl in 1953 for a concentration government with the participation of the Association of Independents (VdU) .

Dismissal of the federal government

On May 22, 2019, on the proposal of Federal Chancellor Sebastian Kurz , Federal President Alexander Van der Bellen dismissed Herbert Kickl , who had been Federal Minister of the Interior of the Federal Government Kurz I until then . It was the first time a minister had been dismissed in the Second Republic .

The Federal Government or individual members can be removed from office by the Federal President according to Art. 74 Para. 3 B-VG at their own request. For example, on May 22, 2019, following the dismissal of Herbert Kickl as Minister of the Interior, Vice Chancellor Heinz-Christian Strache and Ministers Beate Hartinger-Klein , Norbert Hofer and Mario Kunasek were removed from their offices at their own request.

Dissolution of the National Council

So far, only Wilhelm Miklas has made use of the right to dissolve in 1930 after the Christian Socials had lost their coalition partners and thus the parliamentary majority. Since the following election to the National Council was not in the interests of the government - which had run the new elections - the instrument of dissolving the presidential parliament was subsequently no longer used.

Dissolution of a state assembly

The dissolution of a state assembly represents a direct intervention by the federal government into the autonomy of the states. This is a federal executive procedure. As in the case of the dissolution of the National Council by the Federal President, according to the prevailing opinion, a Landtag that has been dissolved in accordance with Art. 100 Para. 1 B-VG is incapable of acting until its newly elected successor has met. This right has not yet been exercised by any Federal President.

Commander in Chief of the Austrian Armed Forces

With the B-VG amendment of 1929, Article 80 B-VG passed the supreme command over the armed forces from the main committee of the National Council to the Federal President. There are no further statutory provisions and no known precedents for this competence. If the defense minister takes actions that the Federal President strictly rejects, he (as with any other member of the government) has the right to dismiss him. In any case, the Federal President can order extraordinary recruitment measures and has a comprehensive right to information. In the case of the execution of findings of the Constitutional Court , the head of state can dispose of the army without restriction.

Representation of the republic to the outside world

According to Art. 18 Para. 3 B-VG, the Federal President is empowered to “avert obvious, irreparable damage to the general public” at a time when the National Council is not and cannot be met in time, at the request of the Federal government and with the approval of the permanent subcommittee of the main committee of the National provisional law changed to make regulations. Constitutional law and other important provisions cannot be changed by such emergency ordinances . As soon as the National Council meets again, they must be confirmed by it in legal form or - if the National Council rejects this - immediately revoked. The emergency ordinance law has not yet been applied.

Art. 146 para. 2 B-VG entrusts the Federal President with the execution of decisions of the Constitutional Court that are not the responsibility of the ordinary courts. The application for execution is made by the Constitutional Court itself. The regulation of Art. 146 para. 2 B-VG equips the head of state with extensive powers of intervention. The execution can be directed against state or federal organs as well as against a state or the federal government as a whole. The Federal President canissue direct instructions toall federal and state organs, including the armed forces or the police . If a federal organ or the federal government as a whole is affected, the resolution of the Federal President does not require a countersignature according to Art. 67 B-VG.

The Federal President appoints the federal civil servants, including the officers of the federal armed forces and judges, as well as other federal officials in accordance with Article 65 (1) (a) B-VG. These powers are mostly delegated to the ministerial ministers due to the corresponding authorization by Art. 66 B-VG. High-ranking officials are appointed by the Federal President himself ( Art. 65 Para. 2 lit. a B-VG).

The Federal President also has a number of other rights that are typically part of the tasks of a head of state. These include, for example, the creation and awarding of honorary and professional titles in accordance with Paragraph 2 lit. a B-VG Art. 65 as well as the de facto meaningless right to declare illegitimate children to be married at the request of their parents ( Art. 65 Para. 1 lit. d). The presidential rights arising from simple federal laws include, for example, that of the “ Promotio sub auspiciis Praesidentis rei publicae ”, in which doctoral students with special performance certificates receive a ring of honor from the Federal President. In addition, the Federal President has the right to put down criminal proceedings (right of abolition) or to pardon prisoners ( Art. 65 Para. 2 lit. c B-VG in conjunction with Section 510 StPO ). According to the very early judicature of the Constitutional Court, acts of grace by the Federal President not only destroy the punishment itself, but also the censure associated with it. Accordingly, a disciplinary judgment can no longer invoke such a conviction (June 1923):

"The repayment of a conviction granted by the grace of the Federal President means that this conviction may no longer be considered even in the event of disciplinary proceedings."

The constitution does not contain any provision for resignation (resignation from office), which is why it is disputed whether such a de jure is possible.

"Anyone who undertakes (Section 242, Paragraph 2) to depose the Federal President by force or dangerous threats or to compel or prevent using one of these means to exercise his powers at all or in a certain sense is punishable by imprisonment from one to ten Years to punish. "

In contrast to most offenses, insulting the Federal President is not a private indictment , but an offense of empowerment . The head of state does not have to appear personally as a prosecutor, but authorize the public prosecutor to prosecute him. An example of the application of this provision is the so-called " hump-dump affair ". The title “Federal President” may not be used by anyone other than the current Federal President, even with an addition or in connection with other designations, as it is protected by law.

Election of the Federal President

The Federal President is elected by the federal people on the basis of general, equal, direct, secret, free and personal suffrage . The constitutional basis forms the ( Art. 60  B-VG), the simple legal provisions regarding the implementation of the election are set out in the Federal President's Election Act.

Until the electoral law reform came into force, which was decided by the National Council on June 16, 2011, according to a provision in the Federal Constitution and in the Federal Presidential Election Act, the exclusion from the right to stand for election due to the origin of "members of governing houses or such families who previously ruled" excluded from running for the office of Federal President. The provision was included in the constitution to exclude members of the Habsburg-Lothringen family from the office of head of state. It no longer applies as of October 1, 2011. The initiative to repeal came from Ulrich Habsburg-Lothringen .

Discussion about changing the term of office

After the 2010 election there was a proposal that the Federal President should be re-elected for an eight-year term with no possibility of re-election. So far, however, the discussion has been unsuccessful. on the basis of criticism from constitutional lawyers .

→ Main article : Election of the Federal President in Austria in 2016

Federal President Heinz Fischer was not allowed to stand for re-election. In the first ballot, Norbert Hofer qualified with 35% and Alexander Van der Bellen with 21% of the valid votes for the runoff election. In the runoff election on May 22, 2016, Van der Bellen emerged victorious with 50.3% versus Hofer with 49.7%. However, the Constitutional Court canceled the election because of violations of the electoral regulations in the handling of postal votes and because the first results were published too early, which made it necessary to repeat the second ballot throughout Austria. In fact, no manipulations could be proven. The date for the redial was initially set to October 2, 2016, but after a glitch in the production of postal voting documents, this date was postponed to December 4, 2016. On December 4, 2016, Alexander Van der Bellen was able to prevail again with 53.8% against Norbert Hofer with 46.2% of the valid votes.