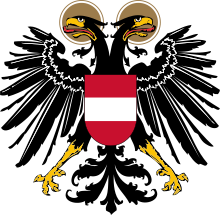 State coat of arms: compared to the coat of arms of the republic, recourse to the imperial double-headed eagle, supplemented by a halo, omission of the wall crown as a symbol of the bourgeoisie, the hammer for the workers and the sickle for the peasant class

In Austria , the concept of corporate state was used by the dictatorial governments of Dollfuss and Schuschnigg and their supporters to designate the authoritarian form of government from 1934 to 1938. Officially, the state was called the Federal State of Austria between the “ May Constitution ” of May 1, 1934 and the “ Anschluss ” in March 1938. This epoch of Austrian history is also known as Austrofascism . 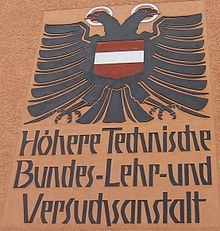 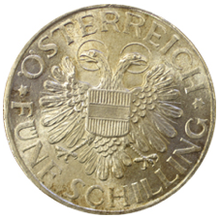 Double eagle on the 5 shilling coin from 1934

The definition of the Austrian historian Gerhard Jagschitz summarized in 1983:

“The corporate state represents the sum of bourgeois revision and restoration policies against the system of November 1918. Its determining factors, anti-Marxism and anti-Bolshevism, the destruction of the parliamentary-democratic principles of order, anti-liberalism and the concept of the state of political Catholicism resulted in the construction of an authoritarian, class-based state Framework of the May constitution of 1934. "

Against the frequent mention of the corporate state without quotation marks in contemporary Austrian literature, it was argued that this would continue an ideologically and propagandistically justified self-designation without distance. (For comparison: the term “Anschluss” , also a propaganda term of the dictatorship, is now mostly placed under quotation marks.) The term Austro-Fascism or Austro-Fascist corporate state is used for a clearer definition, but this is scientifically controversial.

The idea of ​​a corporate state developed in the second half of the 19th century. It had a strong anti- liberal thrust and arose as a protest against the social decline inherent in capitalism for traditional occupational groups such as farmers and craftsmen.

In Austria, this concept was represented by Karl von Vogelsang , one of the ideas behind the Christian Social Party . In the first half of the 20th century it was mainly Othmar Spann who propagated such ideas.

This idea had a strong thrust against the organized labor movement : employers and employees should sit opposite each other within the “professions” in order to prevent an independent and cross-class trade union movement. Overcoming the class struggle was an urgent goal of the corporate state ideologues. The Austrian corporate state referred to the encyclical Quadragesimo anno by Pope Pius XI.

The Christian Social Chancellor Engelbert Dollfuss used a parliamentary rules of procedure crisis, triggered by the resignation of all three Presidents of the National Council on March 4, 1933, for a coup d'état. His government propaganda spoke of the " self- elimination of parliament ", but in reality he prevented its reassembly. Federal President Miklas remained inactive despite being asked.

After the elimination of parliament, Federal Chancellor Dollfuss ruled on the basis of the War Economic Enabling Act from the First World War , which gave him extraordinary powers. This was not the first time the law was used after the war: the governments between 1918 and 1920 had already used it, although there was a parliament at the time, and it had also been used in 1932. He paralyzed the Constitutional Court (the judges close to the government resigned) to prevent MPs from bringing legal action, and was able to consolidate his dictatorship in the February fights in 1934 by completely eliminating social democracy .

After Dollfuss' murder on July 25, 1934 in the course of the National Socialist attempted July coup , Kurt Schuschnigg became Federal Chancellor and thus leader of the “corporate state” until, under the political and military pressure of the Nazi regime, he resigned on March 11, 1938 and paved the way for cleared the " connection ".

Continuing to break the (still valid) federal constitution , a new constitution ( May constitution ) was passed on May 1, 1934 , which had been drawn up primarily by Otto Ender . A “Christian-German corporate state” was proclaimed (there was talk of a “better German state”), whose state authority was to emanate from professionally organized chambers that were to replace parliament and parties.

For the state reform, however, Schuschnigg explicitly entrusted Odo Neustädter-Stürmer as federal minister with the technical management of the activities of the federal ministries in preparation for legislation on the professional reorganization (September 10, 1934– October 17, 1935 and November 6, 1936– March 20, 1937 , Schuschnigg cabinets I and  III ). Of the planned seven chambers - all of which would have been necessary for the start of the May constitutional legislative process - only two, the Chamber of Agriculture and the Chamber for the Public Service , were actually set up.

A Patriotic Front was created as a party substitute , in which all parties that had not been banned were brought together until 1936 - after that all political opposition was banned. Social Democrats, Communists, Liberals and National Socialists were hostile to the regime. This had to do not least with his massive attempts to re-catholize the workers and middle classes alienated from the church (forced church building in working-class neighborhoods, for example in Sandleitenhof , institutional pressure on the youth via confession notes, etc.). The regime had a narrow social base from the start.

Political opponents of all stripes were persecuted: In January 1934 the Kaisersteinbruch detention camp was put into operation with the allocation of around 70 prisoners, the number of detainees at the beginning of April was 629 (516 National Socialists , 113 Social Democrats and Communists ). On April 30, 1934, this camp was evacuated and the detainees were ordered to be transported to Wöllersdorf .

The corporate state saw itself as an opponent of National Socialist Germany , but copied it (like fascist Italy) in many ways. This ambivalent politics was also pursued at the level of symbols.

The cross , symbol of the Fatherland Front, was used as a medieval symbol - the oldest depiction is on the (Roman-German) imperial sword - opposed to the swastika . The consistent use of this propaganda symbol was new for Austria.

The army , in 1934 against the Social Democrats in use in 1938 but not against the invasion of the Wehrmacht enabled because Schuschnigg "shedding of German blood" was received in 1934 (except for the small air forces) instead of the previously worn uniforms in the style of the army such, stylistically based on the Danube monarchy.