The historical technical term restoration ( Latin restaurare 'restore' ) generally describes the restoration of a political situation, usually the reinstatement of an old dynasty that had been eliminated in the course of a revolution .

What is also meant is the restoration of a legitimate form of rule that was temporarily interrupted by internal or external influences (violence, coup ), the recuperation 'recovery'. On the other hand, the reinstatement of a form of rule that has lost its reputation due to earlier events or that has no tradition in a country is called instauration .

The name restoration was borrowed from the main work of the Swiss constitutional lawyer Karl Ludwig von Haller , The Restoration of Political Science or Theory of the Natural-Sociable State of the Chimera of the Artificial-Bourgeois (1816–1834). Von Haller still used the term positively; later in the 19th century it lost that connotation and was equated with reaction . 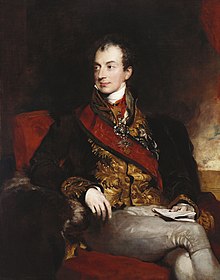 In the following, it is understood to mean in particular the period of the Vormärz in the German-speaking countries, i.e. the time after the Congress of Vienna in 1815. In the narrower sense, the years 1815–1830 are referred to as the Age of Restoration for the German states . The driving force was Prince von Metternich . The restoration in Switzerland (1814–1830) also fell during this period .

The period after 1848 is also sometimes referred to in Germany as the restoration period. However, the term reaction era is more common .

Restorative tendencies can be seen across Europe, with England being an exception due to its prehistory. The decisive revolution ( Glorious Revolution ) had already taken place there in 1688 and the social concessions at the beginning of the 19th century had been carried out in the form of labor disputes and parliamentary debates. England consequently also remained one of the few nations in Europe in which no March Revolution took place.

The Meiji Restoration , the political upheaval in Japan after 1868, was only in name a restoration of earlier conditions, insofar as political power was transferred back from the Shogun to the Emperor, the Tenno . In fact, with the Meiji Restoration, the rapid transformation of Japan from a medieval feudal state into a modern industrial society began.

In 1948, the re-establishment of the monarchy in Spain was planned by dictator Francisco Franco . Since then, Spain has officially been a kingdom again, albeit without a real king. It was not until November 22nd 1975 that there was a king again in Spain - Juan Carlos I - within the framework of a parliamentary hereditary monarchy and not as prepared by the recently deceased monarch Franco, in the form of a fascist king and an instauration .