The title of this article is ambiguous. Further meanings are listed under Revolution (disambiguation) .

The storming of the Bastille on July 14, 1789 at the beginning of the French Revolution

A revolution is a fundamental and lasting structural change in one or more systems that usually occurs abruptly or in a relatively short time. It can be peaceful or violent. There are revolutions in the most varied areas of social and cultural life. The terms evolution and reform are antonyms : they stand for slower developments or for changes without radical change. The exact definition is controversial; there is no generally valid theory of revolution about the necessary and sufficient conditions for the emergence of every revolution, the phases of its course and its short-term and long-term consequences. A person involved in a revolution is called a revolutionary .

The foreign word revolution was borrowed in the 15th century from the late Latin revolutio ("rotation", literally "rolling back") and initially referred to as a technical term in astronomy the orbit of the celestial bodies . Nicolaus Copernicus used the Latin word revolutio with this meaning in his main work De revolutionibus orbium coelestium (1543).

In England in the 17th century, the term was used in relation to the Glorious Revolution in 1688 in the sense of a restoration of the old legitimate state (a rolling back of social relations). Today's main meaning of violent political overthrow came, starting from the French révolution ., In the 18th century. In the history of the GDR , for example, a very special interpretation emerged with the term early bourgeois revolution .

March Revolution in Berlin in 1848

The term revolution is used today for profound changes in the most diverse areas, for example in science , culture , fashion , etc. Today, political or social revolutions are critical transformation processes in which the legal or constitutional decision-making process is overridden and the until then the ruling elite is deposed and a different political system with different representatives is installed.

A real definition is not available because of the diversity of the many processes described as revolution. For example, it is controversial whether a revolution must necessarily come from below, that is , must be supported by an underprivileged social group or class , whether revolutions must always be violent , or whether unsuccessful, i.e. suppressed, attempts at revolution are to be described as or to be distinguished from them as revolts or uprisings . The historian Reinhart Koselleck complained in 1984 that the term was so "worn out" by its ubiquitous use that it needed a precise and verifiable definition in order to continue to be used, "if only to find consensus on the dissent" .

Revolutions can be classified according to various criteria. There is a widespread distinction between supporting strata, whose interests are to be enforced in the revolution: civil revolutions are identified (such as the Glorious Revolution 1688 or the French Revolution ), proletarian (such as the October Revolution 1917) and agrarian revolutions such as the Mexican Revolution , the Chinese revolution and various wars of independence in the process of decolonization after World War II . The political scientist Iring Fetscher also calls the "intellectual" or "managerial revolution".

Another classification criterion is the ideology of the protagonists of the revolutionary movement: According to this, a distinction must be made between democratic , socialist and fascist revolutions. Revolutions can also be classified according to their causes, whereby exogenous factors (e.g. wars and economic dependencies) and endogenous factors (dissatisfaction of the population, modernization processes and their sometimes negative consequences - such as pauperism at the beginning of the industrial age - change in values ​​and Ideologies that are shared among the population, etc.).

The political scientist Samuel P. Huntington distinguishes between revolutions of the western and the eastern type: Those like the French or the Russian revolutions would take place in weak traditional regimes that visibly disintegrated in a crisis . Therefore, only a small amount of violence is required to overthrow them. Subsequently, the argument between moderate and radical revolutionaries is more violent. During this struggle, the revolution spread from the metropolis in which it originated to the rural population. On the other hand, revolutions of the Eastern type would arise in colonized areas or military dictatorships : Since these regimes are strong, they came from guerrillas who operated in rural areas, from where they conquered the capital with considerable efforts of violence up to civil war . Examples of Eastern revolutions are the Chinese Revolution and the Vietnam War . The political scientist Robert H. Dix added the Latin American type, in which an urban guerrilla allies with urban elites and thus overthrows the old regime.

In the world of ideas of traditional pre-industrial societies, which were based on a harmonious order, a harmony of man , society and nature with the divine creation , the community , individual groups and also the individual person were threatened by the corruptio (corruption) that always existed is when an order ( form of government ) loses its positive features, such as when free citizens are unilaterally dependent on others, and when doing the virtue (virtus) is lost, the own well with the common good is to unite. In such a situation it is advisable to return to the starting point ( Machiavelli : Ritorno ai principi ), to bring disorder back into order. In fact, right up to modern times , revolutionary movements right up to the beginnings of the French Revolution consistently made the initial demand to return to the “old law”. It was only after the revolution of 1789 that the idea that a “revolution” in today's sense would create something new took hold.

In sociology and colloquially, a “revolution” denotes a radical and mostly, but not always, violent social change (overthrow) in existing political and social conditions. If necessary, this can lead to an upheaval in the cultural “norm system of a society”. A revolution is either carried by an organized, possibly secret, group of innovators (cf. avant-garde , elite ) and is supported by large sections of the population, or it is a mass movement from the outset .

Partly the term emancipation is added, i. H. the idea of ​​liberation from grown structures and a gain in social or political freedom for the individual. The importance of the individual criteria for defining a revolution is quite controversial.

If, without profound (radical) social change, only a small organization or a closely linked social network with a relatively small mass base undertakes a violent overthrow, this is known as a coup d'état or, especially with the participation of the military , a coup. After successful coups, the term revolution is then often used as an ideological justification by reinterpreting the coup as a revolution. Putsches can also trigger profound transformation processes in the sense of a revolution, the transition between the two terms is fluid.

Sometimes the term revolution is also used to denote a more general, profound change in the structure of society, even if it is not necessarily one of particularly sudden and rapid changes. We are talking about the Neolithic Revolution - which lasted several thousand years globally - or the Industrial Revolution that spread from England across the European continent between 1750 and 1850 , which in turn was a precondition for various political revolutions during this period.

An example of a sociological theory of revolution is the Marxism , the only endogenous, namely economic causes of revolutions assumes: The intrinsically dynamic, dialectical development of productive forces would class antagonisms exacerbate such that a proletarian world revolution with scientific safety would result. This prognosis turned out to be erroneous.

The political science has been unable to agree on a unified theory of revolution. The historian Eberhard Weis, for example, names five main factors that represent essential prerequisites for the emergence of a revolution, whereby he does not take developing countries into account:

The American sociologist Charles Tilly sees a “revolutionary situation” as the prerequisite for every revolution, which he defines as “a forcefully forced relocation of state power”: Two power blocs are irreconcilably opposed to one another , both of which lay claim to sovereignty in the state. In this respect, a revolution is "an escalated form of the normal pluralistic struggle of social groups for the distribution of the values ​​of domination, security and welfare that go beyond the legal framework of the political system". The decisive factor for the success of the revolutionary group is not so much how great the general dissatisfaction is, but how well and how sustainably it succeeds in using this to mobilize larger parts of the population and to form coalitions. If this succeeds and if the holders of state power prove to be incapable of suppressing or reintegrating the groups in opposition to them, the tension will discharge in one or more “revolutionary events”: There will be violence and the revolutionary group can possibly enforce their claim to power.

The concept of "revolutionary law" in Germany goes back to Johann Gottlieb Fichte's philosophical considerations on the French Revolution (1793). As a result of the November Revolution in the Weimar Republic, the law of the revolution developed in the civil law jurisdiction of the Reichsgericht , which was also constitutionally recognized and adopted by the State Court in 1926 :

“The Reichsgericht has consistently taken the position that in state life actual rule, which has been able to assert itself against resistance, has legal recognition. In particular, the state authority newly created by the upheaval was not denied state recognition. The illegality of their reasoning was not considered to be an obstacle because the legality of the reasoning is not an essential feature of state authority […]. The so-called right of revolution has thus been recognized. "

This jurisprudence and the associated way of thinking later legitimized the Nazis' seizure of power . The normative power of revolutionary law was confirmed again in 1952 by the Federal Court of Justice .

Theorists and practitioners of the revolution

Sociological theorists of the revolution

(See also the catalog raisonnés in the personal articles.)

Systems of rule and politics 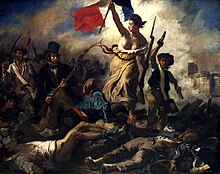