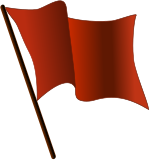 The red flag as a symbol of the communist revolution

The Russian Revolution ( Russian Русская революция / Transkription Russkaja rewoljuzija ) describes several revolutionary upheavals in Russian history in the early 20th century, in the narrower sense the February Revolution of 1917 , which resulted in the end of the Tsarist autocracy , and the October Revolution , the seizure of power of the Bolsheviks , that same year. It resulted from various erosion processes in Russian politics and society, including the military failures in the Russo-Japanese and World War I , deficits in the integration of new social groups and deficits in the modernization of the Russian Empire .

The 1905 Russian Revolution included a series of clashes and violent anti-government protests against Tsar Nicholas II.

Consequences of the revolution: 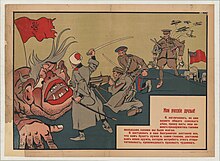 Propaganda poster in the Lubok style of the Tsarist forces, 1917

When the war began in 1914 , the majority of Russian peasants were behind the tsarist government, which was in alliance with Great Britain and France ( Triple Entente ). However, the unfavorable course of the war for Russia and the poor supply of the civilian population soon led to a change in mood. The willingness to protest grew, especially as Tsar Nicholas II, who had been in command of the military since August 1915, rejected reforms and instead expanded police surveillance of the population.

The mood of protest intensified noticeably at the beginning of 1917, when price increases and a further deterioration in the food supply drove the population in Petrograd to strikes and demonstrations. In the February Revolution of 1917, workers' uprisings that started in Petrograd ended Russian tsarist rule. The soldiers called in by the tsar to suppress the uprising not only refused - unlike in 1905 - to shoot at the demonstrators, but some of them went over to them. The tsar had to July 2nd . / March 15, 1917 greg. abdicate.

The new power situation created by the resignation surprised the bourgeois parties. The Duma set up a Provisional Government under Prime Minister Lvov and then under Kerensky . A first official act was the proclamation of fundamental rights . In parallel, the revolutionary movement gave rise to workers 'and soldiers' councils ( soviets ), which consisted of the Mensheviks and Bolsheviks of the Social Democratic Party and Social Revolutionaries . The communists and social revolutionaries continued the revolution under the slogan All Power to the Soviets and prevented the formation of a bourgeois parliamentary democracy.

Both organs subsequently cooperated and competed with one another without actually taking full power. Meanwhile, a real peasant revolution took place in the province , against which the Provisional Government was powerless. So-called peasant committees organized the expropriation of the landowners.

The military effort of the Kerensky Offensive on the front against the Central Powers , propagated by the Provisional Government, failed in July 1917 after just under three weeks.

Lenin's return from exile in Switzerland to Russia on April 3, 1917, supported by Germany and acclaimed by his followers , was to have a major impact on the future situation. Besides the immediate end of the war, Lenin's political program did not include any further support for the provisional bourgeois government, since he considered it to be capitalist and incompetent. The end of the war in particular became a hot topic for those responsible. After several reshuffles of the Provisional Government, individual Mensheviks and Social Revolutionaries had been given cabinet positions which, however, did not influence the line of government to continue the war. Military defeats and further deterioration in the supply situation led to a rapid loss of confidence in the government among the population. Therefore, since September 1917 , the Bolsheviks were able to record clear majorities in the Soviets of Moscow and Petrograd.

For Lenin, who had been preparing his supporters for an armed uprising since his return, favorable conditions for a revolution were now in place. On the night of October 24th to 25th, Jul. (7 to 8 November greg. ) 1,917 armed took Bolsheviks one the most important institutions of the capital Petrograd, put under Trotsky's leadership, the government, and called upon the power of the Soviets, where they encountered relatively little resistance.

Whether the October Revolution is really a revolution is a matter of dispute. Today, the events of October 1917 are often referred to in specialist literature as the coup or coup of the Bolsheviks.

The Russian civil war from 1917 to 1921 killed over 8 million people. The Bolsheviks emerged victorious from the conflict and founded the Soviet Union in late 1922 . The war involved (at least) four clashes: