This article refers to the title of ruler tsar ; for further meanings see ZAR .

Zarin is a redirect to this article. For the Iranian vehicle manufacturer, see Zarin Khodro .

Tsar (from bulgar. And serb. Цар or russ. Царь to hear ? / I ; from old bulgarian. Цѣсарь, кесар, which goes back to Latin Caesar ) was the highest title of ruler in Bulgaria , Serbia and Russia . The term tsar is commonly associated with the Moscow Empire , although the Bulgarian ruler Simeon I (893-927) was the first to receive this title in recognition of his services to the First Bulgarian Empire . In connection with the idea of ​​the Third Rome , the tsar title is a symbol for the successors of Rome and for the imperial claims of a monarch.

The female form is Tsarina (" Empress "; Bulgarian, Serbian and Russian царица zariza ). The Russian heir to the throne , usually the son of the tsar, carried the title of tsarevich during the reign of his father , the daughters of tsarevna .

The territory of a tsar is also known as the tsarist empire , especially in the case of the Russian empire .

The title is best known for the modern monarchs of Russia , but was already used in Bulgaria and Serbia in the Middle Ages . The title has its linguistic origin outside the Slavic world. The name developed like the Gothic kaisar (4th century AD) from the Roman title Caesar , ultimately attributed to the Roman statesman Gaius Iulius Caesar . As a synonym for the Byzantine title basileus and the Latin imperator , the word found its way into the Slavic languages as a loan word . Due to the rivalry of the Slavic rulers with the Byzantine Empire , the Slavic derivative Tsar consciously distanced itself from the Latin original form and, like the competing titles, was intended to reinforce the imperial claims of the title holder.

The Bulgarian rulers always hoped for legitimation through Byzantium and recognition of their own power. Until its fall , Constantinople was considered the spiritual center of Orthodox Christianity. The legitimation of rule among the southern Slavs therefore mostly sought proximity to Byzantium and often used Rome as a means of pressure against the patriarch in Constantinople. The Bulgarian ruler Terwel (700-721) already bore the title of Caesar , which was given to him by Justinian II for his services during the second siege of Constantinople (717-718) .

Officially, the title “Tsar” seems to have been used by the ruler Boris I Michail (853–890). The title is for the first time in Bulgaria in the 10th century for Simeon I (893–927) and his son Peter I (927–969) through the epitaph of Ichirgu -Boil (the third man in the Bulgarian state after the Khan and the Kawkhan ) called Mostitsch (bulgar. Мостич) historically documented. The grave inscription was found in 1952 during archaeological excavation work by Prof. St. Waklinow in the so-called Mostitsch Church in the inner city of the old Preslaw administrative center . Scientists today assume that the stone monument was created in the fifties, or at the latest in the sixties of the 10th century. The text of the monument reads (in Old Bulgarian and translated):

“Mostitsch, Itschirgu-Boil rests here under Tsar Simeon and Tsar Petar. At the age of 80 he left his office, gave up all his fortune, became a monk and that is how his life ended. "

The epitaph is kept in the Veliki Preslav Archaeological Museum .

Simeon I had since 917, based on the Byzantine model, the Greek title βασιλεύς "Basileus of all Bulgarians and Greeks". Through his successful campaigns against Byzantium, he managed to legitimize the title of Tsar and to receive recognition as an equal Caesar alongside the Emperor of the Holy Roman Empire of the German Nation and the Byzantine Emperor .

Knowing about the importance of the church for his legitimation, he created an autocephalous church that was to compete with the Patriarch of Constantinople. In 927 Preslav became the seat of the Bulgarian Orthodox Patriarchate . This apostasy of the church from its patriarchy and the creation of an autonomous church structure consolidated the basis of legitimation for the Bulgarian tsar and are a sign that Simeon I was able to emancipate himself from Byzantium. This state of emergency of an autocephalous Bulgarian church was reached only once in the Second Bulgarian Empire after the invasion of the Latins . The subsequent Bulgarian rulers carried the title of tsar until the last Bulgarian tsar Ivan Shishman at the end of the 14th century until the Ottoman invasion and the conquest of the capital Tarnowo in 1393. This also ended with the subsequent subordination of the Bulgarian church to the primacy of the patriarchate in Constantinople Second Bulgarian Empire.

From 1908 the Bulgarian rulers again carried the title of Tsar: Ferdinand I , Boris III. and Simeon II , although the latter three were dubbed “kings” in the West. In 1946 the Tsarist Republic of Bulgaria ended and Bulgaria became a People's Republic.

In Serbia , in 1346, Stefan Uroš IV. Dušan was crowned the first tsar of the Serbs and Greeks in what was then the capital of the Serbian empire Skopje . His son Stefan Uroš V. also carried the title. In the 16th century, a self-proclaimed tsar Jovan Nenad ruled in what is now Vojvodina . The Serbian kings of modern times bore the title "kralj". 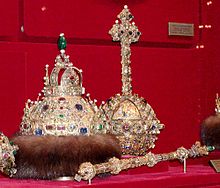 Insignia of Tsar Michael I.

The Russian tsar title does not have a direct secular origin at the court of the Russian rulers, rather it is of an ecclesiastical nature and can be traced back almost to the beginning of Russian history .

The Kievan Rus already referred to the Byzantine basileus as tsar; the imperial residence city of Constantinople bears the name Carigrad (imperial city) in old Russian sources . From the 13th century onwards, the title of tsar was no longer reserved only for the Byzantine emperors in Russia. Rather, it was granted to all independent rulers who did not have traditional titles such as king or prince in the Russian language. The tsar title was therefore a general term for a ruler. It could be used for any regent without a specific definition - regardless of their actual title. The title referred to Mongolian great khans, khans of the Golden Horde and rulers of Tatar successor khanates. Russian princes did not initially have the title of tsar. It was only used in a few exceptional cases to indicate special merits or piety after the death of a person. In old religious texts, a few Russian rulers were referred to post mortem as tsars.

The first Russian ruler to be given the title of tsar with certainty is Saint Vladimir I , Grand Duke of Kiev (960-1015). The title was used on a purely personal and not an institutional level. Even if the title was widely used, it never replaced Vladimir's status as Grand Duke and was never extended to include the secular rule of Vladimir.

The ecclesiastical vacuum that arose after the fall of Constantinople in 1453 was only filled again by the emerging Moscow Empire, which finally liberated itself from Tatar rule in 1480. It made use of old legitimation mechanisms that the Bulgarians had already developed beforehand. This became necessary because after the fall of Constantinople in 1453 the Orthodox Church was no longer protected by an emperor. In the 15th century, the Moscow Grand Dukes (Russian Veliky Knjas ) began to lay claim to the title of Tsar, especially from abroad.

In connection with the title of gosudar vseia Rossii ("Ruler of all Rus", a title addition to the title of Grand Duke), this was necessary because of the international recognition of their title of Grand Duke. The Grand Duchy of Lithuania , whose grand princes themselves bore the phrase “rulers of many Russian countries” in their title, refused to recognize the Moscow grand prince as “ruler of all of Russia” until the forced armistice of 1494. They saw in the Russian title the announcement of a political plan: from the addition "all of Russia" they interpreted a claim to a larger territorial area than was ruled by the Grand Duchy of Moscow at the time. Ivan III was the first Russian Grand Duke who used the title of Tsar for himself in contact with foreign countries during his reign (1462–1505). "Tsarism" and the title "Tsar" were now expressly associated with Orthodoxy in Russia and it was Ivan III who was the first to claim the role of defender of Christianity against the heathen - and thus the role of a real tsar . The tsar title had become free through the fall of Constantinople in 1453 and the end of the Tatar foreign rule over Russia, and Ivan III. occasionally began to use it unofficially for himself in dealings with powers that were, from a Russian point of view, weaker.

It passed after Ivan III. almost half a century before the first Russian ruler was crowned tsar . This was Ivan IV in 1547. In accepting the title, the Moscow ruler was not concerned with becoming part of the European state system, but with using the title as an expression of the independence and autonomy of the Moscow Empire.

Due to the lack of legitimation and recognition of the Russian tsarist title as an empire by the European powers (→ two emperor  problem ) and the successful conclusion of the Great Northern War on October 22, 1721, Peter I took the title of "all-Russian emperor" (imperator vsjerossijskij) at the request of the senate officially and thereby raised the claim to formal equality of his empire, which had risen to become a great power, with the leading states of Europe. From the Tsardom of Russia was Russian Empire ( Rossiyskaya Imperija ). Beginning with the old Muscovite imperial idea , the religious preservation of the Russian state with the “only blissful orthodoxy” as the Third Rome , the Russian Empire, through the imperial proclamation of Emperor Peter I in 1721, had a supra-religious-secular (“Imperator” has no religious meaning ) and imperial component expanded.

The imperial dignity should not be placed alongside the tsarist dignity, but replace it. The official title of the Russian rulers began from now on with "Emperor and autocrat (" Samoderschez ") of all Russia, Moscow, Kiev, Vladimir, Novgorod". The tsar title was retained in relation to the former Tatar areas of Kazan , Astrakhan and Siberia and was later extended to other territories. Nicholas II called himself "Tsar of Kazan", "Tsar of Astrakhan", "Tsar of Poland", "Tsar of Siberia", "Tsar of Tauride Chersonesos" and "Tsar of Georgia".

In decrees on domestic policy, however, the emperor continued to use the old title. In Western Europe it is still customary to speak of the Russian tsar today. What you hit with this was not the current dignity of the empire, but the continued existence of specifically Russian reality in the form of the Moscow tsarist empire, which served as the basis of the new empire.

The title of grand duke was used in modern times for all non-ruling members of the imperial family (except for the emperor and / or the empress), with the respective heir to the throne since 1797 carrying the title of tsarevich or tsarevna . Since the dynastic reform of the house rules of Emperor Alexander III. (modified in 1886) only younger emperor's sons and their respective children were allowed to bear the title of “grand duke” or “grand duchess”, other relatives were downgraded to “ princes ” or “princesses”.

In 1917, with the February Revolution, the last Russian Emperor Nicholas II , who had a subordinate tsar title in his ruler's title, was forced to abdicate.