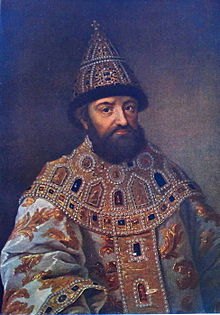 Tsar Michael I of Russia

Mikhail was born on July 12, 1596, the son of the boyar Fyodor Nikititsch Romanow -Jurjew, a cousin of Tsar Fyodor Ivanovich , and his wife Xenia Ivanovna Schestowa. The Romanov family was persecuted by the then ruler of Russia Boris Godunov after being denounced . Fyodor Nikititsch was banished under the name of "Monk Philaret " to the Anton Sijskij monastery and Xenia Ivanovna as Marfa to a monastery near Lake Onega. Mikhail and two of his aunts were banished to the actual home of the Romanovs, the city of Klin , in 1603 . Pseudodimitri I rehabilitated the family. From 1605 on, the young Mikhail and his parents lived in Rostov . 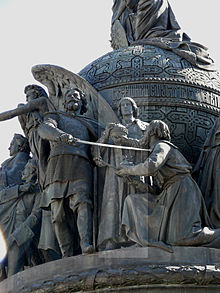 In the early years, his policy was directed primarily against Poland . Polish troops besieged Moscow at the time of his election. King Sigismund III. of Poland refused to recognize Mikhail's rule because he wanted to bring his son Władysław IV. Wasa , who had been elected tsar before Michael, to the throne. In this demand the Russians saw the treaty concluded in Tushino in 1610 broken and demanded the return of Smolensk .

This conflict could only be partially resolved with the peace treaty of Deulino (near Moscow) of December 11, 1618, which guaranteed a peace of 14 ½ years and 1634 with the conclusion of the perpetual peace with Poland, which ended the Smolensk War . On the evening before the latter was signed, a secret article was signed by Russian envoys allegedly obliging Moscow to pay 20,000 rubles to Poland for the cession of the city of Serpeysk . In reality, however, it was about Wladyslaw's renunciation of the tsar title.

In 1624 he married Maria Dolgorukaja for the first time , but she died early. She was most likely poisoned. In his second marriage in 1626 he married Evdokia Streschnewa , who gave him numerous children: