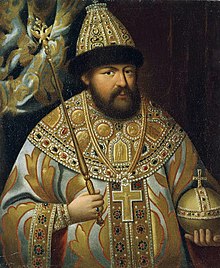 Consolidation of the dynasty

The second tsar from the growing Romanov dynasty ascended the throne as a youth; four months before the death of his father Michael I, he was only sixteen years old. Since his father presented him to the public as his successor on New Year's Day 1643 and handed over the rule on the night he died, the succession was secured and a son followed the father on the tsar's throne.

In the first years of his rule, the power of government was in the hands of his tutor and brother-in-law Boris Morosow .

With the establishment of the Prikas for secret state affairs, he created an important control body that enabled him to exercise the power of government largely independently. His government is characterized by increased oppression of the peasants and an increase in tax burdens, which led to urban uprisings from 1648 (Moscow, Tomsk, Pskov and Novgorod). As a result, Alexei felt compelled to convene the national assembly ( Semski Sobor ) and in 1649 to issue a new imperial code , the Sobornoje Uloschenije , which cemented serfdom .

Alexei's most important advisor was the Patriarch Nikon in 1651 . By clever tactics, Alexei was able to take advantage of the Khmelnytskyi uprising, which began in 1648, and in 1654, with the Treaty of Perejaslav, took over the patronage of the Ukrainian hetmanate . In the ensuing Russian-Polish War 1654–1667 , Russian troops were able to conquer Smolensk in 1654 . After further Russian successes in the following year, Sweden intervened in the war and Russia was able to take over the entire Grand Duchy of Lithuania . At the end of 1655 Russia signed an armistice with Poland and turned against Sweden (see Russo-Swedish War 1656–1658 ). The siege of Riga remained unsuccessful, and after the new hetman Iwan Wyhowskyj had sided with Poland-Lithuania with the Treaty of Hadjatsch in 1658 , Russia and Sweden agreed on the Armistice of Valiesar (1658). The war against Poland, which has now been resumed, was changeable (Lithuania was lost again), but ultimately Russia was able to secure itself in the peace treaty of Andrussowo Smolensk, Kiev and eastern Ukraine in 1667 . In an easterly direction, Alexei expanded his empire with the conquest of Eastern Siberia to the border of China. The international prestige during his reign rose considerably.

In 1658 Alexei fell out with Nikon over the question of the church reforms he had initiated; the seat of the patriarch remained vacant for eight years. The conflict led to the split in the Russian Orthodox Church in 1666 .

Alexei managed to gradually switch off the rights of the national assembly again. His reforms in the military and in economic and trade policy were radical. His main advisors in later years were Afanassi Lavrentjewitsch Ordin-Naschtschokin and Artamon Sergejewitsch Matvejew .

Meanwhile, in 1662, the Moscow population rose again to revolt. The struggle of the oppressed peasants finally erupted in the Peasants' War under Stepan Rasin of 1670/71, which was quickly overthrown. The death penalty imposed on him was carried out on the day the judgment was pronounced, but the myth made “Stenka” Razin become the hero of a very well-known folk song.

The remains of Alexei I are in the Archangel Michael Cathedral in Moscow.

Maria Miloslawskaja died in March 1669, shortly after the birth of her fourteenth child. The death of the almost 16-year-old Tsarevich Alexei in January 1670 hit the tsar hard, especially since the second living son Fyodor was weak and the third son Ivan was weak. 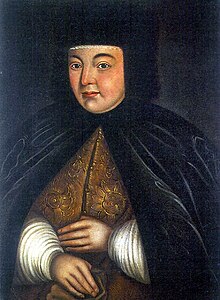 1671 married Alexei to testify in the hope a healthy Tsarevich that a good 22 years younger than Tatar descent Bojarentochter Natalya Naryschkina (born August 22, jul. / 1. September  1651 greg. In Moscow, † January 25 jul. / 4. February  1694 greg. in Moscow). She bore him a son and two daughters: