The title of this article is ambiguous. Further meanings are listed under Smolensk (disambiguation) .

Smolensk [ smʌˈlʲensk ] ( Russian Смоленск ) is a Russian city ​​in Smolensk Oblast in the west of the country near the border with Belarus with 326,861 inhabitants (as of October 14, 2010).

The city is located in the European part of Russia in the middle of the Smolensk hill country on the upper reaches of the Dnieper , which flows through the city from east to west and thus divides it. The river receives several smaller tributaries in the urban area.

Smolensk was first mentioned in 863. What was probably meant was the large Varangian settlement near the present-day village of Gnjosdowo , about 14 kilometers west of Smolensk. Their location on the Dnieper on the way from the Varangians to the Greeks to the Byzantine Empire established their special importance. It is possible that Konstantin Porphyrogennetus also mentioned this settlement as Milinisk .

In today's urban area, the oldest known settlement layer on the cathedral hill on Malaya Schkolnaja uliza from the 9th and 10th centuries is known. In the second half of the 11th century there was a larger castle town in Smolensk. In the 12th century, Smolensk was the capital of the independent Russian principality of Smolensk .

With the expansion of the Hanseatic League into Eastern Europe, the traveling merchants penetrated via Riga, founded in 1201, and the Daugava to Smolensk, which had one of the main Russian markets, which was connected to Novgorod and the Black Sea . In Smolensk the German merchants formed a cooperative, formed a German settlement, bought houses and built a St. Mary's Church. With the Smolensk prince they concluded a trade agreement in 1229, which regulated the rights of the Germans in trade with the Russians. The document, which is documented in Hansisches Urkundenbuch I, No. 232 , was signed by various German merchants from Riga, Groningen , Lübeck , Soest , Münster , Dortmund and Bremen and thus provides information about the many places from which the merchants came did not shy away from the arduous journey across sea and land. The German branch in Smolensk did not achieve the importance it had for the Hanseatic League in Novgorod; it was finished in the 2nd half of the 13th century.

During the Polish-Russian War from 1609 to 1618 , the city was captured by Polish-Lithuanian troops in 1611 after almost two years of siege . From 1618 - contractually fixed with the Russians - it became part of Poland-Lithuania and also the seat of a voivodeship . The Russian attempt to retake Smolensk was the central point of contention in the "Smolensk War" from 1632 to 1634 . The city was finally conquered by the Tsar's troops in 1654 during the Russo-Polish War from 1654 to 1667 and came back to Russia by treaty in 1667.

In 1708 the Swedish King defeated Charles XII. near Smolensk 6000 Cossacks and Kalmyks. In 1812 Napoleon captured the city on his way to Moscow after the battle for Smolensk . 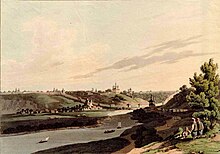 As a result of the administrative restructuring after the February and October revolutions , accompanied by the confusing situation in the final phase of the First World War and the beginning of the Russian Civil War , Smolensk became part of the Western Oblast (Sapadnaya oblast) in 1917 , which occupied most of what is now Belarus . The short-lived bourgeois Belarusian People's Republic also claimed the city for itself in 1918. On January 1, 1919, the Soviet Socialist Republic of Belarus (SSRB) was proclaimed in Smolensk , but its administrative headquarters were moved to Minsk on January 7th . On February 27, 1919, this first independent Belarusian Soviet republic was dissolved again, and Smolensk and the surrounding area, until 1929 as the Smolensk Governorate , came to the Russian SFSR , while the western parts were temporarily united with Lithuania. When the Belarusian SSR was finally re-established on July 31, 1920, Smolensk remained with the RSFSR.

The city ​​was also hotly contested during World War II . In the Kesselschlacht near Smolensk in the late summer of 1941, Smolensk was occupied and almost completely destroyed. Thousands of residents of the city perished or were brought into forced labor under German control between 1941 and 1943. In March 1943, Adolf Hitler visited the city. The Hitler opponent Fabian von Schlabrendorff , who served in the staff of Army Group Center in Smolensk, smuggled a bomb into the plane before Hitler's return flight; but because of the low temperatures in the hold, the explosive device did not explode. A few weeks later, the foreign observers whom Reich Propaganda Minister Joseph Goebbels had summoned to witness the Katyn massacre were housed in Smolensk .

During the battle for Smolensk, the Wehrmacht captured almost the entire archive of the local Soviet administration, including the NKVD , for the period from 1917 to 1939. The disorganized files were completely transported to the German Reich and fell into the hands of US troops there in 1945 . They were brought to the USA, evaluated and for the first time gave an unfiltered view of the living conditions in the Soviet Union in the 1920s and 1930s.
In autumn 1943 the city was retaken by the Red Army with the Smolensk Operation .

In 2013, archaeologists from the Russian Academy of Sciences in Smolensk discovered and excavated an Old Russian church. The church dates back to the 12th century and was built on the left bank of the Dnieper when Smolensk was the capital of the Principality of Smolensk . Only the foundation walls are left of this unique object, which in some places are not particularly high, but in some are the size of a person.

In the Russian census of 1897, 46,699 residents gave the following information on their mother tongue

The most important sights include the fortress walls (1596–1602) which surround the beautiful old town (and are often referred to as the Kremlin walls ), the Resurrection Cathedral (1677–1679), seat of the diocese of Smolensk and Vyasma ; the 12th century Peter and Paul Church; the Archangel Michael Church, also from the 12th century, and the Dormition Cathedral from 1677. The administrative building and the opera theater are fine examples of Soviet architecture. The opera house, which opened in 1780, is one of the oldest.

In the city there is an art museum and the museums of the Association of Artists of Russia. On February 9, 2006, the Hermitage opened a branch in the city.

In Smolensk there is the Talaschkino artists' colony with the Holy Spirit Church, in which frescoes and mosaics by Nicholas Roerich have been preserved.

Smolensk has four cinemas . Above all, this includes the “Smena” municipal cinema theater, which was built in the late 1940s. There is also the "Sowremennik", which was built in 1969 and completely renovated in 2003. With the “Silver Cinema” (opened in 2013) and the “Mirage Cinema” (opened in 2015), Smolensk also has two modern cinemas with seven halls and 1,040 and 1,080 seats respectively.

Smolensk is a commercial, cultural and educational center. Important branches of industry are linen production, mechanical engineering and the food industry . The Smolensk nuclear power plant with three active RBMK reactors is located near Smolensk .

On the northern edge of the city is the Smolensk-Nord military airfield , made famous by the above-mentioned plane crash. Smolensk Airport is located south of the city , but is no longer used for scheduled flights today.

Today, Smolensk is an important railway junction on the routes Warsaw - Minsk -Smolensk- Moscow , Smolensk- Vitebsk - Riga and Smolensk- Saint Petersburg . It is also on the Russian M 1 trunk road ( European route 30 ), which runs from Moscow to Minsk.

In Smolensk there is a consular section of the Belarusian embassy in Moscow.

In Smolensk the prisoner of war camp 218 existed for German prisoners of war of the Second World War . Parts of the city have been rebuilt true to the original.

Sister city of Smolensk is Hagen in Germany as well as the French Tulle . The city is also a member of the New Hanseatic League of Cities .

Personalities with a relationship to the city