The Grand Duchy of Moscow ( Russian: Великое Княжество Московское , scientific transliteration Velikoe Knjažestvo Moskovskoe ) was a Russian sub-principality that became the nucleus of the Russian Empire through the supremacy it achieved in north-eastern Rus in the 14th century and through constant political and geographical growth in power. The principality of Moscow existed from 1263, from 1340 to 1547 it held the dignity of grand duke. The successor state was the Russian Tsardom proclaimed by Ivan IV in 1547 .

The Moscow Principality arose in the 1260s as a sub-principality ( удел ) of the Grand Duchy of Vladimir-Suzdal . The city of Moscow , first mentioned in 1147, formed its center . The territory of the principality initially remained mono-city, ie the only city in the principality was also the capital. Its territory, initially even smaller than today's city sprawl, was covered with dense forests and swamps and was sparsely populated before the Mongol invasion . This changed, however, when in the second half of the 13th century refugees from the severely devastated southern areas, from Kiev , from Chernihiv and southern Pereyaslav moved here. Thus, the demographic situation of Moscow differed significantly from that of other settlements in north-eastern Rus', e.g. B. that of Tver , Rostov , Yaroslavl , Kostroma or Gorodets . The conditions from the pre-Mongolian period, especially those of the nobility, were preserved there. Immigrants had little chance of advancement.

Many warriors also moved to Moscow from Kiev and its environs and served the first Moscow princes. The formation of an army of conscript warriors promoted the rise of Moscow. At the princely court, the warriors were entertained and cared for, to whom no estates could be assigned because of the small dominion. The striving for material gain, which was necessary to maintain the bloated court, led to the emergence of an expansionist-oriented state organization. This was the only way to solve the problem of property ownership in the small principality, which was poor in fertile soil and oversaturated with warriors. High population density, limited territory, traditions of the grand duchies of Kiev and Chernihiv brought by the immigrants were elements that determined the main lines of foreign policy of the first Moscow princes. From these traditions arose the aspiration for a position of prestige with the Khan of the Golden Horde , among the Russian princes and with the head of the Russian Orthodox Church, the metropolitan .

By acquiring Kolomna , Pereslavl-Zalessky (lost again in 1302, 1305) and Mozhaisk on the threshold of the 14th century, i.e. in the first phase of the development of the Grand Duchy of Moscow, which is reckoned until Ivan Kalita came to power, Yuri I. Daniilovich (1303–1325) noticeably increase his small territory. Around 1300 the area of ​​the then still small Moscow principality was about 28,000 km². The aim of this expansion was to gain control over the entire course of the Moskva and to acquire densely populated, fertile areas. Under his rule he was able to triple the territory, almost reaching the first goal.

Struggle for the title of grand duke with Tver

Moscow's expansion at the expense of its neighbors resulted in conflicts and wars with the affected neighbors. Since then, the subject of the dispute has also been the title of grand duke, to which the princes of Tver also laid claim. In the course of this fight, the rulers of both sides, the Twer prince Mikhail Yaroslavich († 1318) and the Moscow prince Yuri I. Daniilovich († 1325) were to die in the camp of the Golden Horde. Subsequently, with the help of the Mongols, Moscow was able to assert itself against the rival principalities of Tver and Ryazan . In the 1320s, the Tatar system of rule also changed. The function of intermediary and tax collector between many Russian principalities and the Mongols was entrusted to the first of the Russian princes, thereby increasing their political dependence, since they themselves were responsible for paying the tributes and jeopardizing their own rule with even minor embezzlements.

After the death of Yuri I Daniilovich in 1325, Ivan Kalita succeeded him as Moscow prince. His reign was marked by Ivan's alliance with the metropolitan of Rus and the ongoing struggle with the Tver princes for the grand duke's dignity. Ivan Kalita's rise to power was accompanied by dramatic events in the Horde. Prince Dimitri II of Tver murdered the Moscow Prince Yuri I Danilovich in revenge for the death of his father without the khan's permission at his court in Sirai. For this arbitrary act, the Khan had him arrested and executed a year later. However, the title of grand duke remained with Twer and went to Alexander Mikhailovich (1326-1328). Under his rule there was an anti-Mongol uprising in Tver in 1327, which Ivan Kalita took advantage of. He offered himself as a willing helper to the Tartars and, together with them, fought the uprising that broke the power of Twers and earned him the dignity of grand duke. He had the advantage of not having to divide his dominion among his sons and spared Moscow from the devastating plundering campaigns of the Mongols that other principalities were often confronted with. This enabled trade and crafts to develop well in Moscow. In 1321 he was able to persuade the metropolitan of the Russian Orthodox Church to move his seat from Vladimir to Moscow, which also served to give Moscow spiritual supremacy in Russia.

Growth and struggle against the Tatars

Assumption Cathedral in the Moscow Kremlin , built in 1479

In the 1360s, the rival principality of Nizhny Novgorod was defeated. Ivan's successor , Simeon the Proud , was already calling himself Grand Duke of All Rus. In the second half of the 14th century Moscow's relations with the Golden Horde cooled, which was due to Moscow's policy of collecting Russian soil . Moscow became the center of the Russian resistance struggle against the Mongol-Tatar rule. The Moscow army fended off Tatar attacks on Ryazan and Nizhny Novgorod, and in 1380 a combined Russian army led by the Moscow Grand Duke Dmitry Donskoy was able to decisively defeat the Tatars in the Battle of Snipe Field. While this victory did not end Tatar rule, it was of great symbolic importance and further enhanced Moscow's standing in Russia.

In 1392 the Nizhny Novgorod and Kostroma regions were annexed to Moscow and Moscow's influence on the Novgorod Republic also began to grow. In 1460 the Grand Duchy of Moscow had already reached an area of ​​430,000 km².

The Grand Duchy of Moscow experienced a decisive increase in power in the 15th century. After the conquest of Constantinople by the Ottoman Empire and the end of the Byzantine Empire , Ivan the Great declared Moscow the only remaining stronghold of orthodox (true) Christianity and the Third Rome . In 1472, to reaffirm his inheritance claim to the Byzantine Empire, he married Sofia Palaiologa , niece of the last Byzantine Emperor Constantine XI. Palaiologos . Byzantine insignia such as the double- headed eagle were also adopted as the Russian coat of arms.

The reign of Ivan the Great (1462–1505) lasted 43 years and was the longest reign in all of Russian history to date. He quadrupled the territory of the Grand Duchy, including by subjugating the Novgorod Republic and annexing Pskov . The princes of the conquered territories were mostly allowed to exercise a certain power as titular princes with the rank of boyars . However, the Novgorod patriciate was eliminated by resettlement. Under Ivan III. Today's Moscow Kremlin was built in place of an older wooden structure. Through successful military campaigns he made the eastern rival Volga Bulgaria ( Kazan Khanate ) his vassal.

The Rus regions under the rule of the Grand Duchy of Lithuania began to look more and more to Moscow after the rights of the orthodox population were increasingly restricted by the Polish-Lithuanian Union . Moscow, which saw itself as the successor to Kievan Rus and the protector of Orthodoxy, took in numerous defectors and their lands. By defeating the Grand Duchy of Lithuania at the Battle of Vedrosha , a third of its territory was officially annexed to Moscow. 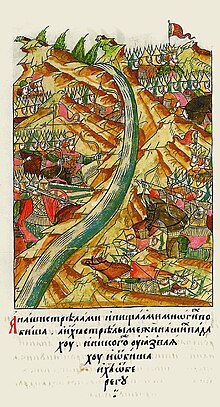 The most important result of Ivan's rule, however, was the standing on the Ugra in 1480, which finally threw off the suzerainty of the Golden Horde, which subsequently split into several khanates. Internally, Ivan enforced primogeniture against the traditional principle of seniority , as several of his predecessors had tried. As a result, Ivan significantly increased the stability of the succession and Moscow territory. In compensation, Ivan granted his disinherited brothers appanages .

Under Vasily III. In 1514 the important Lithuanian-held town of Smolensk was conquered. In 1510 the republic of Pskov was annexed , in 1521 the southern principality of Ryazan . At the same time, however, the Crimean Tatars , who were not interested in the increasing inferiority of Lithuania , began to invade from the south . The Crimean Tatars preferred to keep the wars of the two rivals Moscow and Lithuania alive in order to be courted by both sides with rich gifts and to be able to undertake plundering campaigns. During this time, the Moscow-Kazan wars also took a turn that was disadvantageous for Moscow.

However, under Ivan the Terrible , the Tatar Khanates of Kazan and Astrakhan were finally conquered, gaining access to the Caspian Sea and making Russia a multinational country for the first time. Ivan proclaimed himself Tsar of Russia in 1547, borrowing from the Latin caesar ( emperor ). Officially, the Moscow Grand Duchy was renamed Tsardom of Russia (Russian Царство Русское ) from this point on. In Western chronicles, however, the Russian state was mostly still called Muscovia until the reign of Peter the Great - from then on the Russian Empire .

Prince of Moscow was the title of the medieval Russian ruler before he was made Grand Duke by the Tatar Great Khan. The Grand Duke of Moscow should not be confused with the modern title Prince of Moscow or Prince of the Moskva , which the first French Emperor Napoleon bestowed on his Marshal Michel Ney on the occasion of the Battle of Borodino . The French refer to this battle as the Battle of Moscow or the Battle of the Moskva (Bataille de la Moskowa) because it enabled the capture of Moscow. For his merits in this battle, Ney was created this title, which was not associated with any rights or privileges in Moscow or Russia. However, Ney's son and grandson continued to hold this title during the Second French Empire.