The Novgorod Republic ( Russian Новгородская республика , German obsolete Republic Navgard / Naugard ) was an influential Russian state of the Middle Ages with its center in Novgorod (today Veliky Novgorod ). It existed between the 12th and 15th centuries and stretched from the Baltic Sea to the Ural Mountains .

Beginnings and foundations of independence

The Hagia Sophia of Novgorod

The first efforts of Novgorod to break away from the Kievan Rus appeared as early as the 11th century. The Novgorod boyars were the bearers of these efforts , supported by the urban population, who had to pay taxes to Kiev and provide soldiers for its campaigns. Since the early 12th century, the Novgorodians elected changing princes as regents without consulting the Grand Dukes of Kiev. In 1136, the boyars and leading merchants achieved Novgorod's political independence. Cities like Staraya Russa , Staraya Ladoga , Torzhok and Oreschek , where powerful governors, posadniks , ruled, became vassals and had the status of Novgorod suburbs. Pskov , too, was initially part of the Novgorod Republic, but began to break away from political dependence in the middle of the 13th century. However, the independence of the Pskov Republic was not formally recognized until 1348 in the Treaty of Bolotowo .

By the 15th century, Greater Novgorod expanded to the east and northeast. The Novgorodians explored areas around Lake Onega , along the Northern Dvina and the coast of the White Sea (see Pomors ). In the early 14th century they explored the Arctic Ocean , the Barents Sea , the Kara Sea and the West Siberian Ob river . The Ugric tribes who inhabited the northern Urals had to pay tribute to them (see Jugories ). The areas north of the city were rich in fur animals , marine fauna, salt, and other resources. These were of great economic importance as they formed the basis of the Novgorod Republic's trade.

The walls of the Novgorod Kremlin

The Veche , a popular assembly going back to Old Slavic tradition, was the highest political authority in the republic during the period of membership of the Kievan Rus. This government body had the competence to elect posadniks, military leaders and, from 1156, even archbishops . Most of these came from the boyar class. The archbishop was the head of the executive power of the government and the richest feudal lord of Novgorod, who owned most of the lands and sources of income that were transferred to him by the Kiev prince . The archbishop administered the republican treasury, directed external relations and had the right to pass criminal sentences. Ordinary merchants and artisans also took part in the political life of the Novgorod Republic. They formed their own associations that can be viewed as precursors to political parties .

From the 12th century the Union leaders began to exercise their rights to ratify the most important republican documents. Rulers were invited by the Veche from other principalities with whom a treaty called Ryad was signed. This treaty protected the interests of the Novgorod boyars. The duties of the ruler of the Novgorod Republic were limited. He was seen primarily as a military leader but was unable to prosecute anyone. Life in the city was administered by elected posadniks, who also acted as an intermediary between the city population and the Novgorod prince. The prince's residence was moved from the Novgorod Kremlin (called Detinez ) to a suburb called Gorodistsche. Starting with Alexander Nevsky , the Novgorod princes were elected from among the princes of Vladimir-Suzdal . 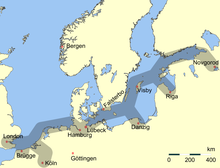 Novgorod in the Hanseatic League

The economy of the Novgorod Republic was based on agriculture and animal husbandry (including horse breeding), hunting, beekeeping, and fishing. Iron was mined on the coast of the Gulf of Finland . Cities like Staraya Russa and other places were known for their salt production. However, fur hunting played a major role, also in the expansion of the Novgorod settlers into the Urals.

Novgorod had had a Hanseatic office , the Peterhof , since the middle of the 13th century , and exported goods such as furs, beeswax and honey to the entire Baltic region. Novgorod's small strip of the Baltic Sea coast, which many other states, especially Sweden, tried to conquer in order to control Novgorod's trade, was therefore of strategic importance.

Example of a Novgorod birch bark document (No. 109) 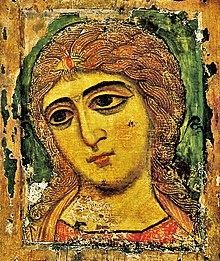 The angel with the golden hair. Novgorod icon, second half of the 12th century

The Novgorod Republic was one of the leading cultural states in Europe. While many monarchs in Western Europe were still illiterate, the population of Novgorod was known for its comparatively high literacy . The citizens of Novgorod communicated a.o. a. with the help of birch bark documents (Russian Берестяные грамоты ), which are now often found during archaeological excavations. These are mostly private letters, messages or invoices that offer insights into everyday life in different sections of the population.

The Novgorodians were known for their independent style in architecture and icon painting . The predominant religion was Orthodox Christianity . The language that the Novgorodians spoke differed from Russian in the central Russian principality of Vladimir-Suzdal and is now known as the Altnovgorod dialect .

Traditional enemies of the republic were Sweden and the Teutonic Order , who pushed east partly for religious, partly for economic reasons. A number of Swedish-Novgorodian Wars were fought over areas of influence in Finland and Novgorod's important trade access to the Baltic Sea . The Knights of the Teutonic Order tried from the late 12th century to bring the Baltic region under their control. In total, Novgorod went to war 26 times against Sweden and 11 times against the Livonian Brotherhood of the Sword .

Taking advantage of the Mongol invasion of Russia , the German knights tried together with the Danes and Swedes, especially in the years 1240-1242, to relocate their military operations to the Novgorod region. However, their campaigns failed in the Battle of the Neva and the Battle of Lake Peipus . Another important victory for the Novgorodians was achieved in the Battle of Wesenberg . On August 12, 1323, the Treaty of Nöteborg between Sweden and Novgorod was signed, which for the first time regulated the border between the Russian and Swedish parts of Finland.

Due to its location in the far northwest of Russia, Novgorod escaped the horrors of the Mongol invasion, although the republic had to pay tribute to the Khan of the Golden Horde in order to maintain independence. In the 14th century, the campaigns of the Novgorod River Fleet ( Ushkuiniki ) reached as far as Kazan and Astrakhan and contributed to the decline of the Golden Horde.

Decline of the republic

The principalities of Tver , Moscow and Lithuania tried to subjugate Novgorod from the 14th century. Formally, but not in fact, Novgorod was subordinate to the Grand Duke of Vladimir , a title that was contested between the Rurikid lines of Tver and Moscow. After obtaining the title, Mikhail Yaroslavich of Tver sent his governors to Novgorod without prior consultation with the citizens. This event led Novgorod to develop closer ties with Moscow.

After Moscow emerged victorious from the sharp rivalry with Tver and also assumed the leading political role in north-eastern Russia in the aftermath of the Battle of Kulikovo , its grand princes pursued more than ever the policy of gathering the Russian soil , to avoid feudal division of the land. However, an influential part of the Novgorod boyars wanted the republic to be preserved instead of uniting with other Russian territories. This caused tension with Moscow and led to an armed conflict in 1397, in the course of which Moscow annexed the areas of the republic along the Northern Dvina.

To withstand the pressure from Moscow, Novgorod sought an alliance with Lithuania. A pro-political party, led by the governor Marfa Borezkaya , influenced the Veche to take pro-political steps. Borezkaya invited the Lithuanian prince's son to Novgorod to marry her and become the ruler of Novgorod. She also formed an alliance with the Polish-Lithuanian monarch Casimir IV . However, the upper class of Novgorod was confronted with massive unrest among the population, as they feared the expansion of Catholic power over them and strictly rejected it.

In view of the unrest, Moscow, as the “protector of orthodoxy”, went to war again against Novgorod, despite the current peace of Yaschelbizy , whose upper class was viewed by Moscow as “treasonable”. In the Battle of the Schelon in 1471, 5,000 Muscovites defeated around 15,000 Novgorodians, some of whom were unwilling to fight, and laid the foundation for the consequent elimination of Novgorod's independence. 1478 sent Grand Duke Ivan III. an army to siege Novgorod and eventually annexed the entire republic in favor of a centralized Russian state. The unruly Novgorod patriciate was forced to resettle in Moscow.