This article covers the Ob River in Russia. For the city of the same name, see Ob (city) , for further meanings see OB .

The Ob ( Russian Обь , fem. ) Is a 3650 km long river in Western Siberia ( Russia ). It rises in southern Siberia and flows into the Arctic Ocean (Arctic Ocean) belonging Kara Sea .

Satellite image of the upper estuary

The Ob river is formed by the union of the two rivers Bija and Katun, coming from the Altai in southern Siberia, near the city of Biysk . It passes the city of Barnaul and flows into the Novosibirsk reservoir , at whose dam the city of Novosibirsk is located.

Then it flows in a north-westerly direction through the West Siberian lowlands . He passes the cities of Nizhnevartovsk , Surgut and Khanty-Mansiysk . After the last-mentioned city and about 300 km further north-west, the Ob is divided into the Big Ob and Little Ob (446 and 456 km long, respectively), which flow together again in a northerly direction - east of the Urals - before the North Siberian Salekhard .

From this city, where the Ob bends eastward to flow roughly parallel to the Arctic Circle , it is only a short distance by Russian-Siberian standards to its confluence with the Obbusen ( Обская губа , Obskaja guba ). This 750 km long and up to 70 km wide bay is no longer a river, but as an estuary already part of the Kara Sea , which in turn belongs to the Arctic Ocean ( Arctic Ocean ) . However, it has a strong current flowing northwards, driven by the large masses of water of the Ob.

The length of the ob can be measured in several ways:

Depending on the type of measurement, the Ob is in fourth, sixth, fifteenth or twenty-fourth position in the list of the longest rivers on earth .

To the 5410 km maximum river length (Irtysh – Ob) one can add the length of the 750 km long Obbus , the elongated estuary of the Ob, so that there is a total of 6160 km of flow from the source of the Irtysh to the north end of the estuary.

Catchment area of ​​the Ob and its tributaries

Around 85% of the Ob catchment area lies in the West Siberian Plain , only in the south and south-east the Ob flows through the upper reaches of the South Siberian high mountains of the Mongolian and Great Altai and the Kuznetsk Alatau as well as the low mountain range of the Salair Ridge .

The Ob flows through landscapes of the most diverse natural spatial conditions. From the deserts and semi-deserts in its headwaters over the steppe landscapes on its upper course and the swampy taiga landscape on its middle and lower course to the southern foothills of the forest tundra and tundra in the area of ​​the mouth and the obbus, it crosses the typical continental vegetation on its course. and climatic zones of Central and North Asia .

The Ob shows a typical nival discharge regime . With these, the runoff is mainly controlled by the snowmelt . Strong discharge peaks in spring and early summer and low water from late summer to the end of winter are therefore typical. On the upper reaches of the Ob, the nival runoff regime is still pronounced in the mountainous variant, but this soon changes into a nival regime in the lowlands.

Ice rush on the Ob

The ice dams piled up by the ice drift dam the river, and the water level can rise several meters in a very short time. These spring floods can flood the Ob valley to a width of over 40 km. In order to accelerate the breaking of the ice and prevent flooding, explosive charges are repeatedly dropped from the air onto the ice dams, for example in the Novosibirsk region.

The Irtysh, which is significantly longer at the confluence than the Ob with its source rivers, is its most important tributary . There are around 150,000 rivers in the entire Obs catchment area.

Looking downstream, the Ob is fed by these rivers, among others (first line: source rivers; with details of the catchment area in km², length in km and discharge in m³ / s):

The rivers Nadym , Pur and Tas are also part of the hydrological zone of the Ob, because they flow into the Obbusen or its eastern side estuary , the Tasbusen .

The Ob river is one of the most important waterways for developing the north of Siberia, alongside the Yenisei in central Siberia and the Lena in eastern Siberia. The river is navigable on its upper course for an average of 190 days and on the lower course for 150 days of the year. In 1973 there were more than 260 ports and landing stages as well as more than 150 industrial quays in the Ob river system .

The most important ports on the Ob are Novosibirsk (founded in 1936), Surgut (1964) and Labytnangi (1948). The Ob mainly serves to transport goods such as logs , sawn timber , building materials , food and coal to and from the north. The railroad, for example the Trans-Siberian Railway , which crosses the Ob in Novosibirsk, and its branch lines take over the transport in the west-east direction . In addition to transporting goods, the Ob is also used for passenger transport, including long-haul routes in the area of ​​the river and its tributaries, and for excursion boats.

In addition to its importance as an inland waterway , the Ob is also used to generate energy; the hydropower plant on the Novosibirsk reservoir , for example, supplies Novosibirsk with electricity. The annual usable amount of energy in the Ob river system was estimated at 250 GWh.

In addition, the water of the Ob also serves to supply industry with process water and the drinking water supply for the local population.

The approximately 50 species of fish found in the Ob, its tributaries and the Obbus form the basis of river fishing on the Ob. Occurring species are sturgeon , including, for example, the sterlet , pike , carp fish such as various rutilus and carassius species, aland and hazel , burbot , river perch and various salmon fish such as njelma and coregonus species such as muksun , great veal and peled vendace .

According to Greenpeace estimates, more than 125,000 tons of crude oil from the area of ​​the West Siberian oil disaster flows into the Arctic Ocean every year. It cannot be ruled out for the future that the water of the extremely radioactively contaminated Karachay Lake will come into contact with the Ob via groundwater currents.

Places on the river

The largest cities on the river are the metropolis of Novosibirsk and the cities of Barnaul, Surgut and Nizhnevartovsk. Below are the most important places today or historically on the Ob, its tributaries or in the immediate vicinity with their affiliation to the federal subjects of Russia in the direction of flow: 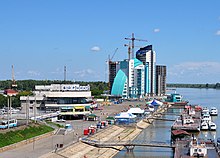 Port on the Ob in Barnaul

Note: * mainly on the right bank