The title of this article is ambiguous. Further meanings are listed under pike (disambiguation) .

Distribution area of ​​the pike

The pike ( Esox lucius ) is a predatory fish and belongs to the Esocidae family . It is widespread in brackish and freshwater bodies of the northern hemisphere . It is used as a food fish , but is difficult to breed because of its aggressiveness . In Germany it was named Fish of the Year 2016.

The color varies according to the habitat, the back is usually green-brown and becomes lighter and lighter up to the white belly. The jaws are reinforced with foldable fangs and hackles that are curved backwards. Pike have 110 to 130 small scales along the sidelines, a total of around 17,000 scales per fish.

The average body length of older specimens is between 60 to 100 cm. Lengths of up to 150 cm and weights of over 20 kg are quite possible with good living conditions. The maximum length is usually only reached by roosters (females), milkers (males) usually do not reach more than 90 cm.

In a study on 802 examined pike from Finland, the maximum weight was 18.8 kg and the maximum length was 131 cm. 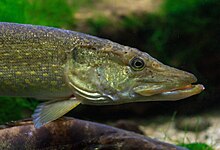 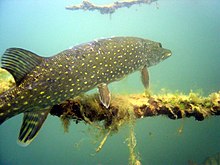 Standing pike in Straussee near Strausberg

Pike in the Maretarium (public aquarium) in Kotka (Finland)

The pike is a stationary fish and likes to stay near the banks of rivers, lakes and larger ponds. He prefers reed edges and similar cover options. There are also pike that stay in the open water of the lakes and follow swarms of whitefish there, for example (so-called "open water pike "). Pike can also be found in brackish water .

Pike eat fish of all kinds and do not shy away from their own conspecifics . Frogs, birds and small mammals also belong to their range of prey. The pike has a reputation for being a very aggressive predatory fish. It has the snap reflex and cannot resist even a banana peel pulled through the water, but shoots after it and snaps shut. For example, pike often devour the chicks of coots and pond claws . The discovery of fully grown pond claws in the stomach of larger pike has also been documented.

From November onwards, the territories of the female pike are often “besieged” by milkers, who become more and more aggressive towards one another as the spawning season approaches in spring. Depending on the water temperature, the spawning season begins between March and April and lasts into May. During the spawning season, several males usually vie for a female - often in fierce fights - but only one male mates . During these fights, which primarily consist of ramming, the pike can injure each other very badly, also from bites. Pike are adhesive spawners , i.e. the eggs cling to underwater plants, branches or the like. The Rogner forms approx. 40,000 eggs / kg body weight. The reproduction takes place on overgrown riparian zones and on flooded meadows. Milchner and Rogner can differ greatly in size.

So that the male pikes who are willing to mate do not become food victims of the females, the females are prevented from eating during mating. However, this disappears very quickly after spawning. It is not uncommon for a smaller male to be eaten by the female after mating. After 10 to 30 days, larvae hatch from the eggs and adhere to the substrate by means of a head gland. During this time they still feed on the yolk sac, but after a short time they swim freely and switch to animal food. This initially consists of water fleas , hippos and other zooplankton . They hunt fry with a body length of 2 cm. The young pike grow very quickly and reach the 15 cm limit in the first year. Male pike usually reach sexual maturity at two, female at four. The maximum age of the pike in captivity is 30 years.

The pike is listed on the Red List of Endangered Species by the International Union for Conservation of Nature IUCN . However, she does not see any significant threats to this widespread species, even if local populations are threatened by habitat changes. Accordingly, it places the pike in the “ Least Concern ” category .

Pike are difficult to cultivate because of their aggressive behavior towards one another . For this reason, scientists created a sterile hybrid of the two pike species Muskellunge ( Esox masquinongy ), a subspecies of the American pike and the European pike ( Esox lucius ). This Tiger Hecht called Hybrid is peaceful and can be at a greater population density in tanks hold than other pike species.

The pike is also valued as a food fish . The pointed bones (Y bones) can be removed without major problems due to their very ordered two-row position in the back. The meat is relatively dry because of the low fat content, the physiological calorific value is around 372 kJ (90 kcal) per 100 g. Pike meat is preferably processed into fish balls ("pike dumplings"). So that it doesn't get dry, the meat can also be filleted and pickled (similar to herring ).

A specialty of French cuisine is brocheton (from Brochet for pike), for which four to six week old fish are used.