from Wikipedia, the free encyclopedia
This is the spotted version , flagged on May 18, 2020 . There are 3 pending changes that have yet to be viewed.

In a show aquarium in Prague. 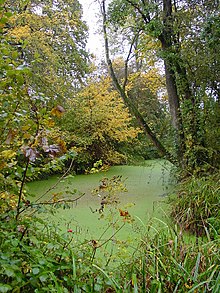 The Tench ( Tinca tinca ), and the loop called, is a freshwater fish from the order of Cyprinids (Cypriniformes) and lives mainly on the ground slowly flowing or standing waters.

It occurs practically in all of Europe with the exception of Greece , Dalmatia , the Scottish highlands, northern Scandinavia , the Crimean peninsula and the Mediterranean islands and in western temperate Asia to the western catchment area of ​​the Yenisei south of 60 ° north latitude.

The basic color of the tench is dark olive; a red-gold cultivated form ("gold tench") is sometimes kept in ornamental ponds. A high tail stalk with a straight tail fin is striking . The lateral line organ runs almost horizontally to the base of the tail. The thick skin is slimy and covered with small round scales. According to recent studies, this mucous membrane has an antibacterial and anti-fungal effect, both for the fish itself and for the fry. The terminal mouth can be pulled forward, has thick lips and has two short barbels.

Tench grow to be 20 to 40 centimeters, with a maximum of 70 centimeters at 10 kilograms. However, only maximum weights of 7.5 kg are used.

Tench have the ability to be cold and heat rigid, which enables them to survive short-term even extreme lack of oxygen. That is why they can also be found in small pools.

Water temperatures between 12 ° C and 26 ° C are ideal. Tench spawn between April and June. The water temperature should have reached at least 18 ° C so that it is ready to spawn. The Rogner lay a total of up to 300,000 sticky eggs on aquatic plants within about two weeks .

They feed mainly on small organisms, but also on snails (e.g. the typical barnacles Bithynia tentaculata that occur in their habitat ) and algae .

Tench tend to brood due to poor environmental conditions and the lack of a healthy predatory fish population . These tench are sexually mature from a size of 15 centimeters and then hardly grow any further.

The tench was given a scientific name for the first time in 1758, Carl von Linné , the founder of the classification system , mentioned it under the name Cyprinus tinca . In 1764 the genus Tinca was introduced by the French zoologist François Alexandre Pierre de Garsault with the tench as the only species, which has remained so to this day. The tench is systematically isolated and in 1878 the American ichthyologist David Starr Jordan established the subfamily Tincinae for species and genus. The British ichthyologist Richard Mayden and his Chinese colleague Wei-Jen Chen placed the tench in a separate family, the Tincidae, in 2009. The scientific fish database Catalog of Fishes took over this and now leads the Tincidae as well as the other former subfamilies of the Cyprinidae as independent families.

The systematic position is illustrated by the following cladogram :

The tench is a valued food fish and is considered to be tastier than the carp . Their meat is described as firm, boneless and low in fat.

Gold-colored tench (so-called gold tench) are bred for garden ponds and park ponds. In pond farming , more carp and trout than tench are used due to their much faster growth. The tench is considered a minor fish in the carp pond economy, it plays an important role as a stocking fish for fishing clubs. Tench was not cultivated as intensively as carp.

While the Czech Republic and other Eastern European countries are leaders in tench breeding in Europe, tench breeding in aquaculture has also been intensified in China since the beginning of the 21st century .

In 2007 the tench was fish of the year in Germany and Austria . It is classified as 'Least Concern' (not endangered) in the list of threatened animal species of the IUCN .

Tench, like carp , is a popular sport fish for coarse anglers . If carp and tench occur together as stocking fish in a closed body of water, both species often compete directly with one another for food. The more active carp are able to push back the tench population when food is scarce. The robust tench, together with the crucian carp, have the lowest oxygen demand and are the only fish species in some bodies of water such as village ponds, clay ponds, bog stings and heavily weed forest ponds.

Tench are considered to be extremely cautious when it comes to foraging and in many bodies of water they only search for food at night or in foggy and overcast weather. During the day, the light-shy tench often hide motionless in underwater plants. If they are looking for food, tench in small groups often make themselves noticeable when gudging in the mud through the rising of swamp gas bubbles. Tench is best caught at dawn and dusk near reed belts, water lilies or other heavily weed parts of the water with animal bait, such as dung worms, mussel meat, maggots, casters, shrimp, etc. The preference for animal food is due to the short intestines of the tench and the poor utilization of vegetable food. Compost and worm soil have a strong attractiveness on tench. Vegetable baits include corn , dough , white bread and, similar to carp fishing, mini boilies . During the summer months, when there is a plentiful supply of food, tench usually bite very hesitantly and carefully and are mostly outwitted using the lift method in ultra-light float fishing. Tench are known for the fact that they often only cause very fine, barely noticeable pluck bites and often play indecisively with the bait.

In spring (the best time in March until the hawthorn blossom ), however, tench bites are often very vehement and abrupt, as the animals are very starved after the barren winter months, which, unlike carp and other whitefish , they usually spend in complete hibernation. In deeper quarry ponds with only small, plant-covered shorelines, tench are usually less territorial and localized, show behavior patterns that differ from the flat natural lake and roam the water on their feeding routes. Bites can be expected here at any time of the day.

In Great Britain, the tench is also known regionally as “ Doctor Fish ”, as its mucus is believed to have healing properties against fever , jaundice , headaches and toothaches .

Fish of the year in Austria