The title of this article is ambiguous. For the British submarine of the same name, see HMS Sterlet (N22) .

The sterlet ( Acipenser ruthenus ) is a species of fish from the sturgeon family ( Acipenseridae ). With a length of around 40 to 100 centimeters, it is one of the smaller species in the group. 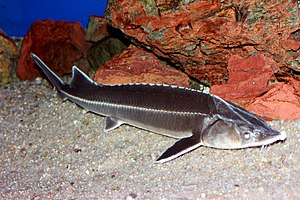 The sterlet has a slender body with a lower, protruding mouth. It has a dark gray to brown basic color, the belly is yellowish to white with a red sheen.

On the slightly upwardly curved snout there are four fringed barbels of equal length in a transverse row that extend to the front edge of the mouth. It has a total of five rows of bone plates as body cover : 11 to 17 ivory-colored back shields with sharp crests and hooks, and 60 to 70 side shields, which extend from the base of the tail to the gill cover . 16 to 18 of the bone plates sit between the pectoral and pelvic fins . There are still very small scales in the skin.

Distribution of the sterlet:

The sterlet lives in rivers in the catchment areas of the Caspian , Black , Azov and Arctic Oceans, as well as in rivers and lakes of Northern Russia and some tributaries of the Baltic Sea . In the Danube it penetrates as far as Bavaria . By stocking it can now also be found in some quarry ponds in Central Europe. Unlike other sturgeons, it does not migrate into the sea.

The sterlet is a river- loving ( rheophile ) bottom dweller who also occasionally occurs in brackish water . The spawning sterlets move up the rivers in April to June, where they spawn on gravel . A female can lay more than 10,000 eggs that stick to stones. After hatching four to five days later, the brood is carried away by the current. After about 3 to 5 years the males and after 7 to 9 years the females are sexually mature.

The sterlet feeds mainly on invertebrates such as worms , snails , insect larvae and small crustaceans . In winter the fish seeks deeper, calm zones.

The sterlet is one of 21 species of the genus Acipenser . The genus also includes the European sturgeon ( A. sturio ) and the wax fat ( A. gueldenstaedti ), which can also be found in European waters.

Above all, a decline in spawning grounds, excessive fishing and pollution of the waters have led to a sharp decline in the sterlet population. He stands on the red list of IUCN in Category 1 and "threatened with extinction" 2 and by the CITES Convention protected.

Today, the sterlet is kept and bred in aquaculture in some places . The spawn is processed into caviar in Russia .

From the Department of Nature Conservation of the State of Upper Austria in cooperation with Upper Austria. Fischereiverband and Bavaria were caught with nets at the Jochenstein power plant and equipped with transmitters so that they could be located from fixed stations or boats. Gene samples were also taken. The aim is to promote the conservation of the species here in the Danube.

Fish of the year in Austria