This article explains the term gravel in a geological and technical sense. For other meanings, see Kies (disambiguation) .

The so-called barley sand from the Miocene of Baden-Württemberg is an example of gravelly sediment. The "pearl barley" are the larger grains, which are in the range of fine and medium gravel in terms of their grain size.

In a geological sense, the term gravel stands for a grain size on the one hand and a loose sediment on the other.

Gravel as a grain size

According to DIN 4022 ( naming and describing soil and rock ) and DIN EN ISO 14668-1 , the gravel grain size includes rounded rock or mineral grains that have a grain diameter between 2 mm and 63 mm and are therefore coarser than coarse sand .

The following grain size fractions according to DIN 4022 are distinguished in a sediment or sedimentary rock according to the equivalent diameter:

The term pebbles (or pebbles ) is also used colloquially for the grain sizes medium gravel and coarse gravel .

In soil science and soil mechanics , gravel is a term for loose rock soil which, according to DIN 18196 ( soil classification for structural purposes ), is defined exclusively by the grain size.

A loose sediment is referred to as gravel or crushed stone if it consists of more than 50% components of the gravel grain size or larger. These components are commonly referred to as pebbles . Gravel is a typical sediment of rivers with steep gradients. The transport in streams and rivers is carried out as soil or towed freight, which ultimately ensures that the grains are rounded if the transport distance is sufficient. Loose sediments with predominantly unrounded or sharp-edged components are called rubble .

The typical mixture of rock fragments with rounded edges and finer-grained material, collectively referred to as bed load , also contains pebbles, deposited on a glacier front in the form of a terminal moraine . A laterally (i.e. laterally displaced within a deposit horizon) increasing scree fraction indicates the transition from purely glacial to glacifluvial deposits, i.e. to deposits of meltwater.

Gravel and gravel can solidify over the course of geological time when minerals dissolved in water fill the gaps in the sediment ( cementation ). A certain consolidation also arises through compaction , i.e. under pressure as a result of an overlay by other rock layers . Gravel and crushed stone consolidated in this way are known as conglomerates . In the case of predominantly non-round or sharp-edged components, so-called fragments, the term breccia is used instead of conglomerate .

Due to the average grain diameter, gravel has a large pore volume and is therefore an excellent aquifer .

Gravel as a building material

In the construction industry, the rounded gravel is differentiated from the sharp-edged gravel . According to EN 12620, both are in the grain size range between 2 and 64 mm. The subdivision into fine, medium and coarse gravel is the same as in the geosciences ( see above ). In Austria, gravel is also known as roll gravel . 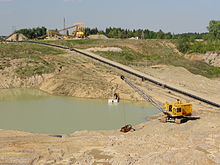 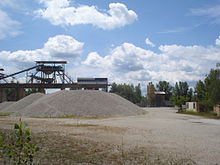 Gravel is an important raw material for the construction industry . There it is used as an aggregate ( aggregate ) in concrete or as bulk material in earthworks . Due to its high pore volume and the associated high water permeability (permeability), pure gravel is also suitable as a filter layer for drainage in damp subsoil. In addition, medium and coarse gravel are used as rolling (capillary-breaking layer) underneath foundation levels due to their pore size, which is well suited for this , in order to prevent the rise of soil moisture. Since pure gravel does not contain any plant nutrients and allows surface water to seep away quickly, it is only sparsely overgrown by vegetation (e.g. poor grassland ).

The promotion of building material gravel, the sand next to the main mass of raw materials is carried out in gravel mines or gravel pits. The mostly inhomogeneous mixtures of different grain sizes obtained there are washed and separated in processing plants . Finer sieving is used for special purposes. For applications in construction and winter service , angular minerals such as crushed sand , chippings and crushed stone are sometimes made from gravel using crushers .

The early civilizations used pebbles as a means of mapping numbers. These special calculating stones are called calculus after the Latin name for pebble stone. The English term for infinitesimal calculus is also calculus.