The DIN standard DIN 4022 of the German Institute for Standardization e. V. regulated the naming and description of soil and rock valid for Germany . In terms of content, it was divided into three parts. The first part dealt with the creation of a layer index for boreholes without continuous extraction of cored samples in the soil and in the rock. In the second part the list of layers for drilling in rock ( solid rock ) was dealt with. Part three contained information on the list of layers for boreholes with continuous extraction of cored samples in the ground ( loose rock ).

In August 2002, DIN 4022 was replaced by the standards EN ISO 14688 , EN ISO 14689-1 and EN ISO 22475-1 . DIN 4022 officially lost its validity in January 2007. In the new version, German terms were essentially replaced by equivalent English terms. EN ISO 14688 has two parts, the content of which is closely based on DIN 4022. However, EN ISO 14688 deals with the naming of soil, while EN ISO 14689-1 deals with Fels for soil investigations (not for contaminated site investigations, see Soil Science Mapping Instructions ). Sampling procedures and groundwater measurements are dealt with in EN ISO 22475-1.

The standard divides soils according to grain size ranges and grain proportions as well as consistency limits and organogenic proportions .

The following classification is made by the standard: 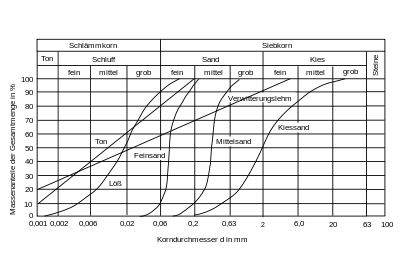