The title of this article is ambiguous. Further meanings are listed under mineral (disambiguation) . 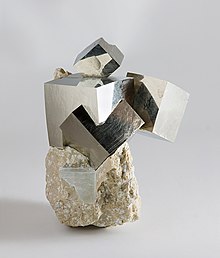 The pyrite belongs to the cubic crystal system and forms cube-shaped bodies. This photo material shows a pyrite from Navajún , La Rioja, Spain, which has grown into a large body made of many nested pyrite cubes .

In contrast to rock, a mineral (from Mittellat. Aes minerale "pit ore", coined in the 16th century according to the French model) is a single element or a single chemical compound , which is generally crystalline and formed by geological processes. The plural is minerals (used in science in Germany and Austria) or minerals (used by collectors, dealers and in German-speaking Switzerland as a synonym for minerals).

The majority of the around 5,600 mineral species known today and recognized as independently by the International Mineralogical Association (IMA) (as of 2020) are inorganic , but some organic substances such as mellite and evenkite or the kidney stone formers whewellite and weddellite are also recognized as minerals because they can also be formed in the wild. Including all known mineral varieties and synonymous names (approx. 1200) as well as not yet recognized mineral types (approx. 120), there are over 6,800 mineral names (as of 2018/19).

The doctrine of minerals is mineralogy , that of their use and processing is lithurgy .

The terms “chemical element” and “chemical compound” contain a fixed composition and a defined chemical structure . Mixtures of substances are not minerals. However, the compositions of minerals can show some variation ( mixed crystals ) as long as they are structurally homogeneous.

Some naturally occurring compounds are not crystalline. These substances can be divided into two categories:

The determination of structure and composition with a completeness sufficient to clearly distinguish amorphous phases from one another is usually difficult or even impossible. Therefore, non-crystalline natural compounds are summarized by many scientists under the name mineraloids . However, the term is mainly used in American textbooks. In contrast, it has not been introduced in the German-speaking area.

Natural, amorphous substances can be recognized as minerals if the following conditions are met:

Metamorphosed substances can be minerals if it can be proven that the substance was originally crystalline and had the same composition (e.g. fergusonite-Y ).

Liquids are generally not counted among the minerals. For example, liquid water is not a mineral, but ice is. An exception is mercury : As an element on earth, it only occurs in liquid and gaseous form, but as a liquid is still recognized as a mineral. Crude oil and all other bitumen , including solid, non-crystalline bitumen, are mixtures of substances and not minerals.

The processes that lead to the formation of extraterrestrial substances, e.g. B. in meteorites and lunar rocks , are similar to those that also take place on earth. As a result, naturally occurring components of extraterrestrial stones and cosmic dust are called minerals (e.g. tranquilityite , Brownleeit ).

Materials that have been created from synthetic substances through geological processes are not generally referred to as minerals. Exceptions are some substances that were previously recognized as minerals, e.g. B. some minerals that were formed by the reaction of ancient metallurgical slag with sea water.

Biogenic substances are compounds that have been formed exclusively through biological processes without a geological component, such as B. mussel shells or oxalate crystals in plant tissues. These compounds are not minerals.

Once geological processes have been involved in the formation of the compounds, these substances can be recognized as minerals. Examples of this are minerals that have formed from organic components in black slate or from bat guano in caves, as well as components of limestone or phosphorites of organic origin.

With the exception of natural glasses and coal rocks , all rocks on earth and other celestial bodies are made up of minerals. The most common are around thirty minerals, the so-called rock formers . In addition, minerals are also found as colloids in water or as fine dust in the air. Water itself is also a mineral when it is in the form of water ice .

Primary minerals arise at the same time as the rock of which they are a part, while secondary minerals are formed as a result of subsequent changes in the rock (metamorphosis, hydrothermal overprinting or weathering ).

A distinction is made between two phases of mineral formation: First, several atoms or ions accumulate and form a crystallization nucleus ( nucleation ). If this exceeds a critical nucleus radius, it continues to grow and a mineral develops ( crystal growth ). After numerous transformation reactions with other minerals, with the air or with the water , the minerals are finally destroyed by weathering. The ions from which the crystal lattice was built go back into solution or, in anatexis, end up in a rock melt ( magma ). Eventually the cycle will start over in a different place.

A special form of mineral formation from the solution is biomineralization . This means the formation of minerals by organisms. The following minerals can arise in this way:

Other forms of mineral formation from solution or through the reaction of minerals with water play a role in technical mineralogy :

Calcite is used to neutralize acids, including carbon dioxide, with the formation of water hardness , pyrite acts as a reducing agent in the bacterial elimination of nitrate through denitrification , while clay minerals can cause neutralization reactions at low pH values and ion exchange reactions. When treating drinking water , the reaction products of the elimination of iron (II) and manganese ions are goethite and δ-MnO 2 , calcite can be formed during softening reactions (decarbonisation). In wastewater treatment, clear crystals of struvite , an ammonium magnesium phosphate, can form if the phosphate concentrations in the wastewater treatment plants are sufficiently high . These can narrow the cross-section of lines. In the event of corrosion of steel and cast iron in contact with water, depending on the nature of the water, goethite, magnetite and lepidocrocite , with higher carbonate hardness also siderite , in phosphate -containing waters vivianite , in sulphate-containing waters troilit and in water containing hydrogen sulphide greigit can be formed. Cuprite , malachite or azurite can be formed from copper , while lead mainly forms hydrocerussite .

Outwardly, freely crystallized minerals show a geometric shape with defined natural surfaces that are in fixed angular relationships to one another, depending on the specific crystal system to which the mineral is assigned. This is also known as the law of angular constancy ( Nicolaus Steno ). The symmetrical arrangement of the surfaces is an expression of the inner structure of a crystalline mineral: It shows a well-ordered atomic structure, which is created by repeatedly lining up so-called unit cells , which make up the smallest structural unit of the mineral. Due to the internal symmetry, a distinction is made between six to seven crystal systems , namely the cubic, the hexagonal, the trigonal, the tetragonal, the orthorhombic, the monoclinic and the triclinic system. The hexagonal and the trigonal systems are occasionally combined by some mineralogists. Two or more mineral individuals that have grown together in a certain crystallographic orientation are called twins . They arise when the rock grows or deforms. Multiple twins often form what are known as twin lamellae, which must not be confused with the segregation lamellae that arise when a mixed crystal becomes thermodynamically unstable during cooling and precipitates form.

Determination with the naked eye:

The color in minerals results from the absorption of light of the complementary color through one or more of the following processes:

Sulfur-containing minerals can often be recognized by the smell that arises when they are hit.

The distinction between halite and sylvine is traditionally made because the latter tastes bitter.

Every mineral is thermodynamically stable only under certain pressure - temperature conditions. Outside of its stability range, it changes over time into the stable modification there . Some phase changes occur suddenly when leaving the stability field (for example high quartz - low quartz ), others are kinetically inhibited and last millions of years. In some cases the activation energy is so high that the thermodynamically unstable modification is retained as a metastable phase (for example diamond- graphite ). This inhibition of the reaction leads to a “freezing” of the thermodynamic equilibrium that prevailed at an earlier point in time. Therefore, the mineral inventory of a rock provides information about the formation and development history of a rock and thus contributes to the knowledge of the origin and development of planet earth (see also Presolar Mineral ).

Mineral raw materials are divided into energy raw materials , property raw materials and element raw materials . Energy resources are for example the minerals uraninite and thorite as nuclear fuels . Property raw materials are used in technology without chemical decomposition, including, for example, quartz for glass and clay minerals for the ceramic industry. Elemental raw materials are mined with the aim of extracting a specific chemical element. If it is a metal, one speaks of an ore. An enrichment of raw materials is called a deposit if it is economically minable. The term is therefore economic, not scientific: Whether a given deposit can be commercially exploited depends on the mining and processing costs and the market value of the metal it contains - while the iron content of minerals must be up to 50% to be financially In 2003, a share of 0.00001% of the much more valuable platinum was enough to achieve a profit . In addition to the classification according to the use of the raw material, a classification according to the origin is also common. Sedimentary deposits, such as the banded iron ore formations, were formed through precipitation reactions when the pH value, pressure and temperature changed or through the influence of bacteria or through weathering processes and the transport of minerals from their original area of ​​origin and their deposition as ( soaps ), for example from soap gold , at the bottom of rivers, lakes or shallow seas. Hydrothermal reservoirs are formed when surface or deep water dissolves certain elements from the surrounding rocks and deposits them elsewhere or from residual fluids after the solidification of a magma. Igneous deposits result from the crystallization of a magma. One example are many platinum and chromite deposits. Metamorphic deposits only arise through the transformation of rocks, for example marble deposits . 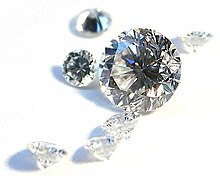 Some minerals are used as jewelry . If they are transparent and their hardness is greater than 7, they are called gemstones , otherwise they are called gemstones . 95 percent of global sales in this market are achieved with diamonds, the rest almost predominantly with sapphires, emeralds , rubies and tourmalines. In order to bring out the beauty of a gemstone, which is influenced by color and luster, it must be cut and polished. There are numerous different cut forms for this purpose: Transparent or translucent varieties are usually provided with facet cuts, in which surfaces that are usually in fixed angular relationships to one another, the so-called facets, maximize the light reflection. Opaque minerals, on the other hand, receive smooth, single-surface cuts. The asterism effect of a star sapphire, for example, can only be achieved with the cabochon cut . The fire of a brilliant cut diamond depends mainly on the observance of certain angular relationships of the individual facets and is created by the splitting of the white light into the individual visible colors ( dispersion ).

Some minerals are also used as body care products, such as the clay mineral lava earth , which has been used as body and hair cleaning products since ancient times . Other minerals, such as talc , serve as raw materials in the fine arts as well as medicinal purposes ( pleurodesis , lubricants in tablet production).

In many ancient cultures, but also in modern esotericism , certain minerals are said to have certain protective and healing effects . For example, was already in ancient Egypt of carnelian because of its color reminiscent of blood as the "Stone of Life" and played at funeral rituals as well as protective and Gem of the Pharaohs a corresponding role. The alleged healing and protective powers of amber , which were already described by Thales von Milet and Hildegard von Bingen , are also legendary .

Systematics of the minerals

Portal: Minerals  - Overview of Wikipedia content on the subject of minerals